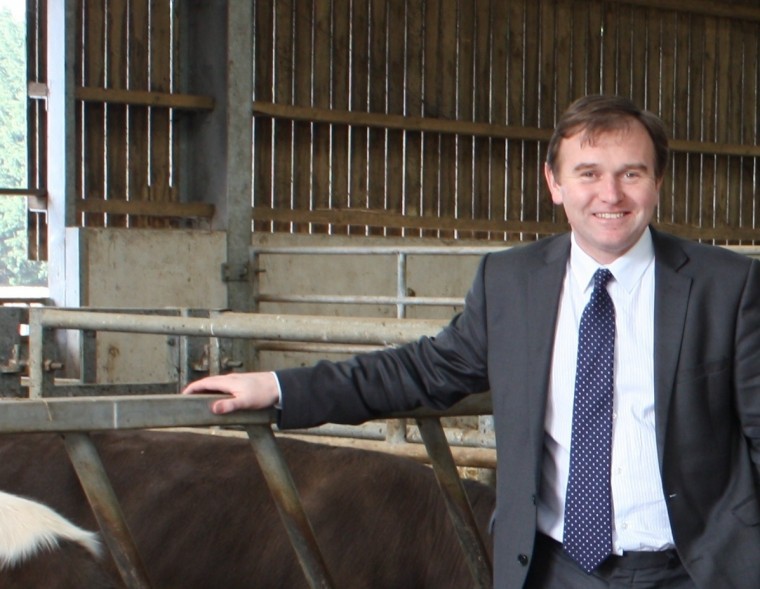 Mr Eustice studied Commercial Horticulture at Writtle College between 1990 and 1993 before working on the family fruit farm for nine years before embarking on his political career.

The Conservative MP for Camborne, Redruth and Hayle since May 2010, who was appointed Farm Minister last October, said: “My learning at Writtle College has been very useful in my entire career, from running the family business to politics, and I still sometimes reference it.

“My thesis was on endodormancy in temperate fruit crops. It is a complex area. Some of those issues still come across my desk now. I am also having discussions about the CAP and how to distinguish between the different crops, which requires an understanding of the botanical names, which I learnt at Writtle. I draw on my study of the vernalisation of different crops, which is relevant to my work now as I have officials looking at differentiating between the different crops to satisfy the requirements of the CAP. So I reach back into the archives of what I learnt at Writtle College to inform what I do now. It all comes back to you.”

Mr Eustice’s first experience of the College was in 1981 when he was aged just ten, which he fondly remembers as a “real adventure”. He came to a Fruit Focus event held at the College, staying in Chelmsford, at a time when his father was just establishing the family fruit farm in Cornwall. When it came to picking a College to study Commercial Horticulture, he returned to Writtle, with its established reputation and beautiful 220-hectare estate.

Mr Eustice recalls: “I liked the feel of Writtle College. I looked at several colleges but Writtle College was one of the best colleges for Commercial Horticulture. I really liked the grounds and the buildings and when I went to the interview I really gelled with the place.

“I had a great time there; I really enjoyed it and learnt a huge amount. I’ve got fond memories – the Summer Ball was, well, a real ball! I still keep in touch with people from my course. Many of them are still working in the industry.”

While studying at the College – which has recently celebrated its 120th anniversary – Mr Eustice, who was a member of Chelmsford Athletics Club, lived in Strutt Halls before moving to nearby Margaret Roding and Chignal Hall, a grand farmhouse that was used for around a dozen students.

After graduating, he worked on the family farm, where they had 50 acres of outdoor strawberries for supermarkets and 200 acres of winter vegetables. His family have 150 years of farming experience and his brother still runs the business, which now boasts a large farm shop and attraction, a successful restaurant and farm retail business as well as a pedigree herd of South Devon cattle and British lop eared pigs.

“When I studied at Writtle, I specialised in fruit growing, one of the few people to do that at that time,” Mr Eustice said. “The College had these fantastic apple orchards at the back when I was there.

“The course was really varied. I spent my placement year at Bransford Nurseries, a nursery stock in Worcestershire. Although my background was in fruit farming and vegetable farming I wanted to get some experience in a nursery.

“The Commercial Horticulture course included glasshouse production, of cucumbers and tomatoes, and this proved useful as I ran a heated glasshouse nursery near our farm for three years, growing strawberries hydroponically in two acres of heated glasshouse. I was then drawn more and more into politics and left the family business in 1999.”

He is conscious that the industry – and the common perception of it – has changed substantially since he was at Writtle: “It’s a really exciting time to be getting involved in the farming industry. When I was at College 25 years ago you got the sense that farmers were the victims of their own success. People had in their minds butter mountains and wine lakes and that we were overproducing and that we didn’t need to produce as much over the next decade. It was an interesting time in farming as the public perception was that there was too much food.

“Now that has totally changed. We have a rising world population set to increase to 9billion. Demand for food has increased by around 60%. We have the challenge of climate change and parts of the world are going to be facing water stress – it will be a really limiting resource in many parts of the world. There is a need for temperate parts of the world such as the UK and Europe to be producing more food. Technology is also advancing more quickly. Farming has become a highly skilled industry with rising food prices and rising demand.”

One of his main concerns as Farm Minister is to make it easier for new entrants with fresh ideas to break into the industry, especially in the context of the rising cost of land.

He said: “We need to find more routes into the industry for bright, talented people like those studying at Writtle College today. They are full of aspirations and want to run their own businesses.

“I am looking at whether we can have additional rungs on the ladder for people to set up their own business. Unless you have inherited your family farm it is still difficult to set up on your own and tenancies are difficult to come by and still require capital.

“I am looking at contract farming arrangements and shared farming agreements whereby you get talented young people in and they own a stake in the business with someone who is ready to retire. There are currently older farmers in their 70s and 80s who are tenants under the old ‘pre 1986’ tenancies but have no successors and find the notion of retirement a wrench. We could use agreements such as contract farming and share farming to allow them to step back from day to day management of a holding while retaining an interest and simultaneously create a new opportunity for a young farmer to enter the industry.”

In terms of his key challenges as Farm Minister, CAP reform and protecting biodiversity are on the top of the agenda. He has supported the Friends of the Earth bee campaign and, while he says there is “no evidence that neonicotinoid pesticides cause harm” the issue of the loss of habitat – such as old garden walls – for bumble bees and other pollinators is one of the elements he is trying to address through the reform of the CAP.

“The CAP is an overly complex scheme. If you were to set down from scratch and design a national policy now it wouldn’t look like the CAP. Every seven years there are a set of reforms that require agreement from 28 member states and you end up with a system that is not satisfactory. We need to look at the long term sustainability of the CAP not in terms of the interventions that we used to have – it is unsustainable in the sense that it is so complicated and difficult to manage. We need to aim in the next one for a simplification while protecting the environment, enhancing food security and domestic food production.”