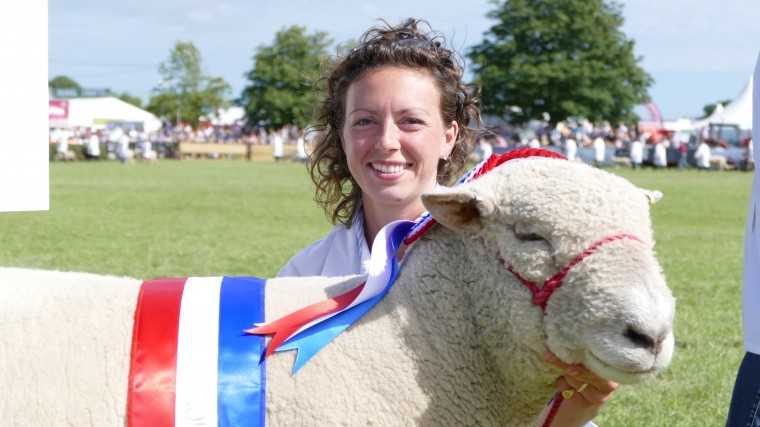 The Harmers started the year with a sheep supreme champion at the Welsh Spring Festival and have since won the supreme beef championship at Heathfield Show where their daughter Lizzie Sargent took the supreme sheep championship.

At the Surrey Show, the Harmers won the supreme pig and supreme sheep championships, and at the South of England Show they were also supreme sheep and supreme pig champions. “I think we just put in a lot of effort,” said Susan Harmer, who runs two farms with her husband Justin as the Wakeham-Dawson and Harmer partnership.

Offham Farm and Mill Laine Farm make up about 600 acres just outside Lewes in East Sussex which starts at the top of the South Downs and runs down to good land in the middle where the main farm is before continuing on down to brooks in the Ouse valley. About 100 acres on the top is a site of special scientific interest (SSSI) and the other 100 acres of brooks make up another SSSI to protect toads. No inputs are used on the SSSIs, and the rest of the farm is in higher level stewardship where any inputs are kept to a minimum.

“It is very much a family venture,” Mrs Harmer explained. “Our son Edward does the cattle and arable crops with Justin, Lizzie does the sheep with me and our youngest daughter Gussie does the pigs – so we are all in it together.” Lizzie farms just outside Battle in East Sussex.

The arable crops are grown for the livestock, so the farm is self sufficient in feed. A traditional rotation of three years’ corn is followed by three years’ grass. Herd and flock health plans are used, and there are very few emergency visits by the vet. The Harmers’ pork, beef and lamb are all sold through Offham Farm Shop, and the farm has another income through Mill Laine Barns, which are holiday cottages.

Unfortunately, the farm’s proximity to Lewes has brought an average of five dog attacks a year. “There is a right to roam on the SSSIs where stock are grazing,” Mrs Harmer explained. “But dogs are let out at night and the owners just wait for them to come back.” In the worst attack, 22 sheep were killed, but more usually two or three animals die. “Two of the last few attacks we have had involved professional dog walkers.”

<a href=”http://www.southeastfarmer.net/assets/flipbook/2017/SEF0717/SEF07July17.html#p=44>Click here to see results and pictures from South of England, Heathfield and Surrey shows