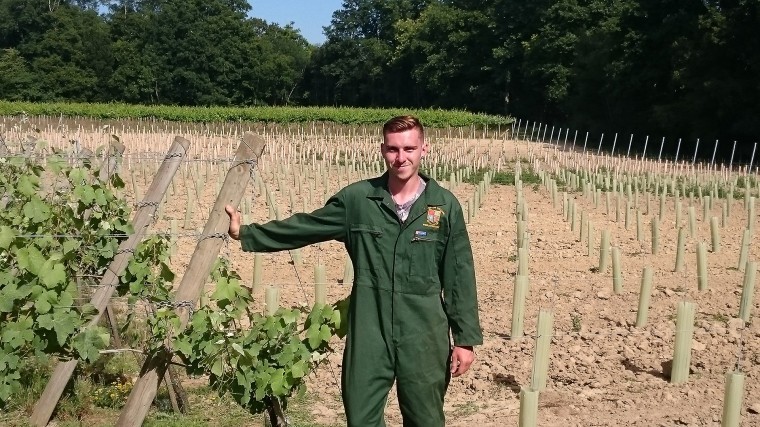 The English wine industry is expanding rapidly, with new plantings at an all-time high due to the international success of its sparkling wine. This has led to a severe lack of hands-on vineyard staff, so Plumpton College has extended its apprentice provision to include a viticulture pathway. Jacob Evans, the first person to take advantage of this scheme, has now completed his two-year training period and is ready to move into the commercial world of viticulture.

During his time at Plumpton, Jacob has learned a wide range of viticultural skills and now has a sound foundation from which to launch his career. He has real hands-on experience of all essential vineyard operations, including harvest, winter pruning, trellis establishment and repairs, and has become a competent tractor driver. Alongside these vinegrowing skills, he has also completed a City and Guilds Level 2 Diploma in horticulture, a qualification that will equip him for a broad range of career paths.

Plumpton College Wine Department now has an established apprenticeship programme for its 10 hectare vineyard, and will be taking on apprentices annually onto the two-year course so that there is continuity of staff and training. Their next apprentice will be soon be appointed to start in September 2015. Other employers wishing to take on more staff via the apprenticeship scheme can qualify for a government grant of £1500 pounds for each apprentice and have their apprentice’s college fees subsidised.

Jacob Evans said: “I didn’t realise how many different jobs there were to do in a vineyard. It’s hard work, but I have really enjoyed learning them. After I get some more experience, I would like to be a vineyard supervisor or even a manager.”