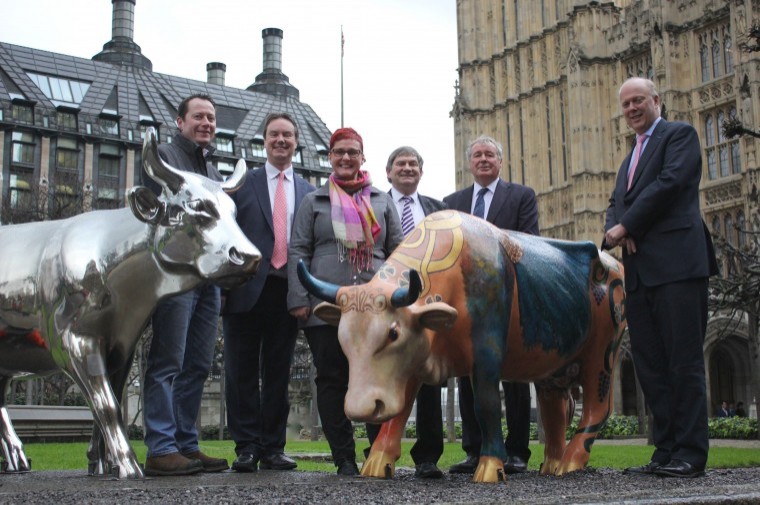 Sir Paul Beresford, Chris Grayling, Philip Hammond, Jonathan Lord, Anne Milton and Dominic Raab, joined members of the CowParade team at the House of Commons to support the initiative which promotes the Surrey Hills as a national asset.

Over the summer months brightly coloured cows will decorate the hills, farms, towns, schools and popular landmarks across the county. Organisers are currently encouraging individuals, companies, schools and other organisations to sponsor a life sized cow and either decorate it themselves or bring in an artist to do it.

The cows will then be displayed around the county before being herded to the inaugural Surrey Hills Food, Drink and Music Festival on 3 September. Those judged the pick of the herd will go to auction at a gala ceremony in London later in the year.
Despite heavy rain the MPs posed in the grounds of the House of Commons with Surrey Hills’ own “Mirror Moo” and “Pilgrim” – a cow painted by GCSE art students at Kings College Guildford who collaborated with Watts Gallery – Artists’ Village in a project coordinated by local visual artist Becci Kenning.

Proceeds from the auction of the painted cows will be shared equally between the Surrey Hills trust fund, established in partnership with the Community Foundation for Surrey to conserve and protect the Surrey Hills area of outstanding natural beauty (AONB). For further information on the Surrey Hills please visit www.surreyhills.org

CowParade was born in Switzerland in 1998 and has been staged in more than 80 cities and towns worldwide. Over the years 3,000 cows have been decorated by more than 5,000 artists. CowParade New York had 450 cows and was seen worldwide by 45 million people.