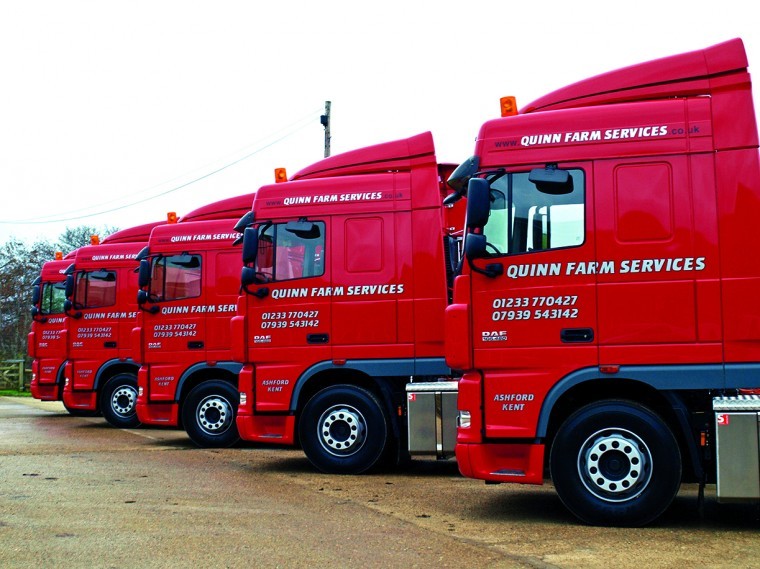 If the council succeeds in its enforcement action, there are obvious implications for any farm contracting business using lorries across Kent and elsewhere. “Almost every farmer in the UK is doing something like what we are doing,” said David Quinn, who runs the family business at New Luckhurst Farm in Smarden, Kent.

As well as growing crops, Mr Quinn has eight lorries which he uses to carry grain, green waste, paper sludge, compost and other materials. But after complaints about the lorries from Smarden parish council, the borough council served an enforcement notice telling Mr Quinn to stop using his land for agricultural contracting.

In its enforcement notice, the council says using the land for the open storage of lorries is out of keeping with the rural location. But Mr Quinn says the lorries cannot be seen because their yard is surrounded by straw bales and poplar trees. The council also says the volume and type of traffic makes an “unacceptable level of noise and disturbance” to people living nearby. But Mr Quinn commissioned an independent survey which showed the road from the farm can accommodate the traffic.

Lorry traffic damages the road verges, according to the council. “There is no proof that the damage was from our lorries,” Mr Quinn said. “We have taken 850 photographs which show that the marks are from tractor tyres.” The council argues that there is already legal diversification on the farm and there is no need for more. Mr Quinn says he just changed what he was already doing after he was asked by HMRC stop stop using red diesel and go on to white diesel. “So of course we had to switch from tractors to tractor units,” Mr Quinn said.

Mr Quinn has appealed against the council’s decision, and an inquiry will be held by a planning inspector in Ashford borough council chambers on September 23 and 24. John Collins, a planning consultant from the DHA Group who is advising Mr Quinn, said the case was “exceptionally strong.” Mr Quinn says there are 202 sites to go to within 10 miles of his farm. “If David does not do this, someone else will have to,” said Mr Collins. So the same movements will have to occur at roughly the same time on the same roads.”

He added that people claimed they were being woken up by night time lorry movements. “But lorries are not leaving at one in the morning,” Mr Collins said. “Most of the lorries leave at 6 or 6.30am.”

The essence of the case, Mr Collins added, was that Mr Quinn had been serving customers locally in a rural area. “Is it right to move that business on to an industrial estate when you would not reduce vehicle miles by doing so? Are the impacts of this enough to warrant refusal of planning permission? I don’t think so.”