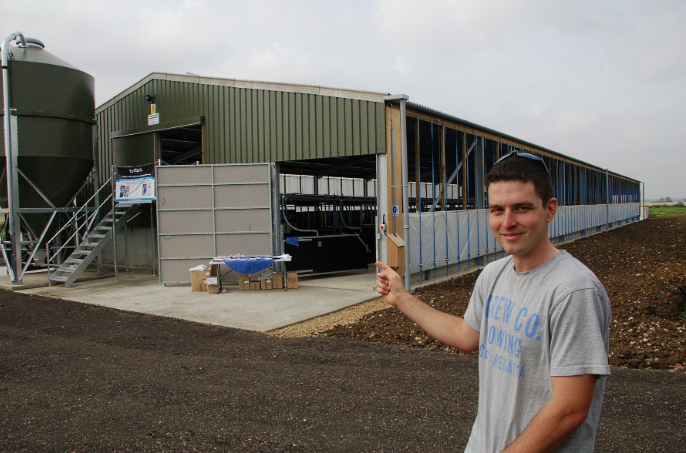 Ben Luxford has made a big investment in two acres of land and a brand-new 1,000 pig place straw-based finishing house at Old Newton, near Stowmarket.

The 500-acre family farm could not support Ben, who had to work as a self-employed carpenter, so he negotiated a five-year contract finishing agreement with British Quality Pigs (BQP), which will give him a steady, low-risk income.

Ben bought the land from his father at the going market rate and on the advice of BQP approached local company, Quality Equipment, to erect the steel portal-framed 200 ft x 50 ft (61m x 15m) building.

“The company had many years of experience with this type of building and could work to the time-scale needed,” said Ben. In fact, the whole job, including kitting out, was completed within six weeks. In the meantime, Ben put his carpentry skills to good use by constructing his own timber-framed portable dwelling, which will enable him to live on site.

The Suffolk-style pig building has 22 pens with Paneltim plastic divisions down the centre and push-through dunging passages against the outer walls. Feed is supplied to ad-lib hoppers, via chain-and-flight conveyors from exterior bulk feed hoppers, and a bank of nipple drinkers is provided over a water-trough to help young piglets.

An interesting feature is the use of a roll of tough, damp-proof membrane to form a false-ceiling over the pens to keep in heat when the piglets are young. This is height-adjustable, cheap and effective.

The use of straw is important as the pigs are reared under a high-welfare ‘Freedom Food’ contract. Ben has a straw-for muck arrangement with his father and reckons he will use around 85-acres worth of straw annually. A catwalk above the pens provides excellent visibility.

The solid-floored dung passages will be pushed through with a tractor-mounted scraper every one or two days, depending on the age of the pigs, and the muck stored on a walled pad at the end of the house.

BQP supplies the pigs, feed and veterinary services while Ben provides the housing, straw, water, labour and day-to-day management for which he’s paid a gross annual income approaching £40 per pig place which is made up of weekly management fee, performance related bonuses and an 11 batch new-build payment. The pigs are delivered at four weeks of age when weighing around 7 kg and leave for slaughter between 15 and 20 weeks when reaching 108 kg. The system should allow a throughput of 2.2 batches, producing 2,200 finished pigs a year.

The house cost £200,000 and the land £20,000, but Ben says this offers a secure way back into farming since he won’t have to worry about the fluctuating price of feed or weaners. He reckons daily management will take about two hours. He is obviously confident about the enterprise as he is planning to put up a similar house in the next six months!

Despite having a semi-intensive unit on just two acres there were no planning problems. Natural England raised the issue of nitrogen and ammonia emissions but investigation showed these to be minimal since straw is used and the feed is formulated to avoid excessive nitrogen excretion by the pigs.