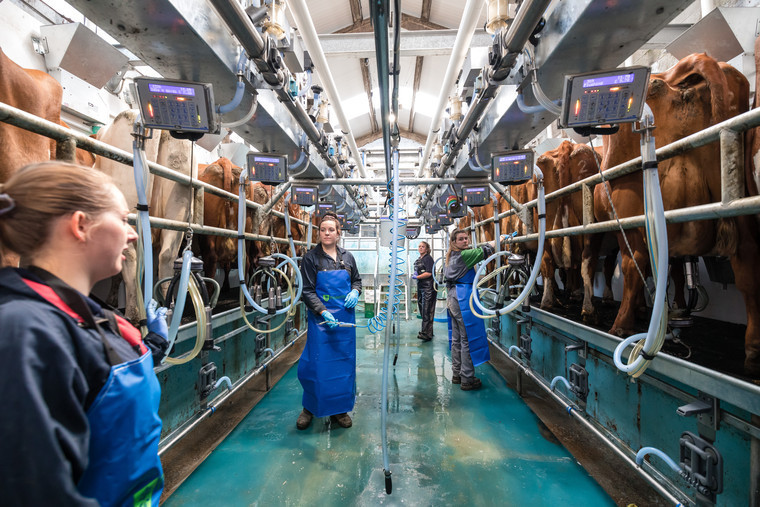 Brinsbury College in Pulborough, West Sussex, now has a milking parlour that would be the envy of many dairy farmers around the country – and that, as farm manager Alex Hollands explained, is the point.

“The dairy industry may be going through a tough time, but the successful businesses are generally those that have modernised and are using the latest equipment. We want our students to find jobs with those dairies, so we need them to have studied the kind of technology that they will be working with when they leave Brinsbury,” he said.
The decision to install the new, British designed and manufactured, dairy is in stark contrast to the situation at Hadlow College in Kent, which has sold its dairy herd and plans to move into beef. Students there will learn about dairying through a partnership with an organic dairy farm near Edenbridge.

Brinsbury’s new facility, based around ATL dairy equipment and refrigeration by MMT Services, will not only be used to teach agricultural students but will help the self-supporting farm business continue to improve its efficiency.

The parlour uses auto identification and milk yield monitoring to allow individual cows to be fed and managed according to their stage of lactation and uses high-tech collars to store and provide live information on the cow’s health.

Mr Hollands explained that hands-on experience was important for Brinsbury’s students, particularly since 80% were from a non-farming background and would be “driving tractors and milking cattle for the first time”. He stressed that the college was not critical of Hadlow’s decision as each institution faced different pressures.

He said he felt students without access to a dairy would “miss out” on valuable skills at a time when the industry was struggling to recruit herdspeople.

“It’s taken us six months to replace an assistant herdsperson and I know of a number of businesses that are struggling to recruit. The industry may be moving towards fewer, more efficient outlets, but I believe dairy is still an important area of agriculture and we want our students to benefit from those opportunities.”

Brinsbury operates what Mr Hollands described as “an extensive New Zealand-based system based on grass and some whole crop, with the herd outside for nine months of the year”.

The farm’s philosophy focuses on quality of milk and longevity rather than on yield, with cattle normally reaching an impressive seven lactations. The “relaxed” approach has been producing 6,000 litres a year, but the technology now being used has already seen that rise to close to 7,000 – and an annual total of more than a million litres.
“It’s important for the students to see the improvements that can be made to yield using a variety of different approaches, including using technology. The farm enjoys great support from the college but runs as a commercial entity and makes a profit,” Mr Hollands explained. The herd is now stable at 150 head of cattle, having proved overstocked at 180 a few years back.

Mr Hollands added that the team was “over the moon with the new dairy and milking parlour”, which he said had dramatically improved conditions for the cows and provided “a fantastic working environment for our students and staff”.

The new dairy, which attracted a government grant towards part of the cost, replaced a manual parlour built in the 1980s, which Mr Hollands said “is not what the industry looks like any more”. He went on: “Now our students are learning in a high-tech environment so that when they leave they will be able to get a job and know not just what they are doing but why they are doing it.”