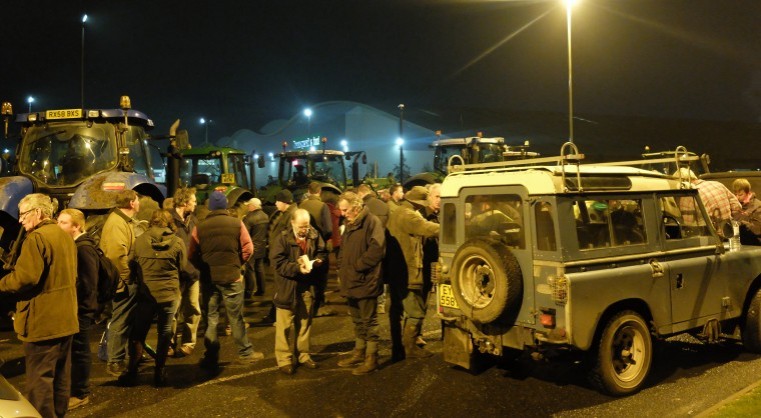 Protestors in their tractors and 4x4s met at the industrial estate at 8pm blockading the entrance to prevent lorries collecting produce for their nighttime deliveries. The Andover distribution centre is the largest in the UK and supplies over 400 stores in the South-East.

Over 100 supporters manned the entrance to Co-op with 4x4s lining the street. Amongst the crowd were dairy farmers, ex-dairy farmers ruined by price cuts, and a large number of young farmers and agricultural students trying secure a positive future for themselves and their friends.

Tom Saunders from Petersfield, who studies at Sparsholt College and has friends in the dairy industry said: “It’s important to stand up against these cuts in milk prices.

“We’re just here to show our support and try and stop it going down even more.”

Jack Lister, a young arable farmer from Andover said “We just want them to get a fair, stable price for milk.”

The Co-op plans to reduce its milk prices by a further 2p/litre despite it not being affected by the global market of liquid milk. Farmers for Action claim this is totally unjustified and they are just following other retailers without considering how it will impact upon their producers.

Their advertising campaigns have also been heavily criticised by dairy farmers who say they are devaluing milk with many people claiming that Co-op seem to care more about fair-trade overseas than they do fair-trade in their own country.

A large number of Co-op lorries could be seen parked along the road waiting for the peaceful protest to be over.
When Co-op were asked how much disruption the protest had caused they declined to comment.

Not only farmers and rural dwellers took part in the campaign to save our dairy farms. Olof Andra Proppe, who travelled from London and works in a biscuit factory read about the protest on the internet and wanted to show her support for the dairy industry. Olof said: “We need to unite. City workers like myself are being pushed just like farmers are being pushed by supermarkets.

“I am looking forward to telling my work colleagues tomorrow about the protest. I think it will give them hope that somebody is standing up against the big bosses and fighting for their future.”

{pull-quote}“If this continues there will be no farms left, people are always going to need to eat so they should be supporting producers, not destroying them.”

Olof, who’s family own a mixed farm in Iceland say supermarkets are crippling their farmers too by filling their shelves with cheap imports rather than supporting Icelandic farmers.

Similar protests have taken place throughout the country at a number of milk processors and retailers in a bid to fight against cuts that could mean the end of many dairy farms. Farmers for Action believe that these big companies are now finally beginning to listen after being contacted by milk processors who tell them the price might stop falling.