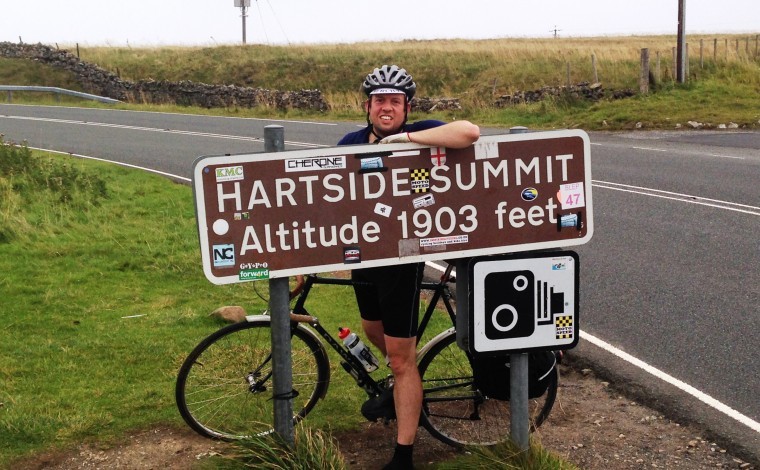 The 37 year old will be waved off at the start by Liz Truss, secretary of state for the environment, food and rural affairs.

All of the money raised from the cookbook will go to two charities, the Royal Agricultural Benevolent Institution (R.A.B.I) and the Eden Flood Volunteers. R.A.B.I, farming’s oldest welfare charity, has paid out emergency grants of £85k to flood victims since December 2015, when storms first hit parts of northern England.

Bryn explained: “I was sat on my sofa at home in North London watching the floods on the news on TV and it really affected me. I’m not from a farming background but I take a keen interest in rural affairs and my brother-in-law’s parents are beef farmers near the Somerset Levels. To see the effects of the devastating floods was soul-destroying for me. I thought that rather than just donate £20 to the cause, I could do much more by getting other people to join in. That’s where the recipe book idea came from.”

Bryn sought support from the farming community via social media and his cookbook went from ‘an idea to all systems go’ within 24 hours.

All that was needed was the money to cover print costs, hence the 360-mile fundraising cycle ride from Downing Street to Cumbria.

Bryn said: “A few years ago I rode coast-to-coast from Whitehaven to Tynemouth. A lot of the rail bridges I rode over back then have been literally washed away by the floods.”

Bryn will be accompanied by friend, Robert Wassell who first got him into cycling, on the ride which will depart from Downing Street at around 8.45am on 4 May, arriving at the Pooley Bridge finish where they will promote the cookbook, at around 2pm on 8 May.

Liz Truss’s involvement was secured through Bryn’s local Conservative MP. Bryn added: “The support I’ve had for both the cycle ride and the cookbook has been just incredible. Having cycled the coast-to-coast route before the floods, it motivated me to ride once more through this beautiful land.”

To order a copy of Up To Our Necks visit the Farmland Press website.