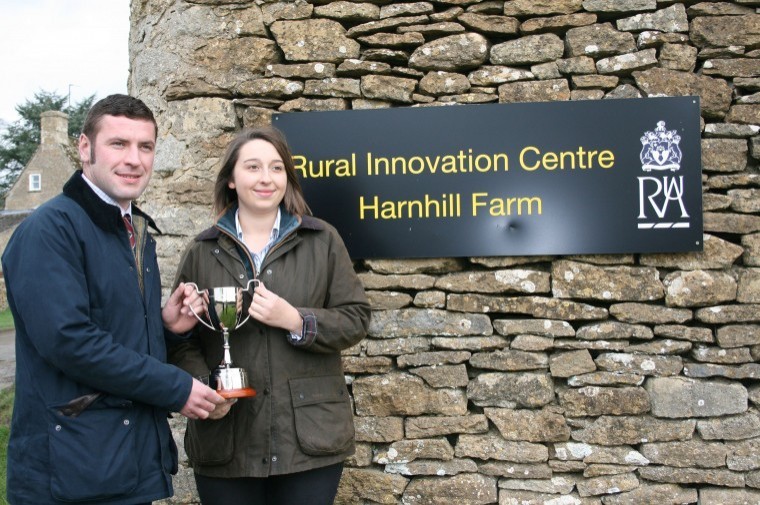 Challenging 16 other teams, including an agronomist team and crop science students from across the UK, they triumphed in the annual competition sponsored by Countrywide Farmers, which is based on the gross margin outcome of each team’s agronomy, farm management and agricultural decision-making skills.

RAU’s winning team comprising Poppy de Pass, Elice Willett, Matt Clarke and Elwyn Thomas achieved the highest gross margin in the competition with a 9.78 t/ha yield and an input cost of £87.10/ha. Together with the trophy, they win a day with a Countrywide agronomist, free entry to a NIAB TAG technical conference and a £100 Countrywide voucher for each team member.

2014’s competition was the largest yet of what is a unique event. “It is really gratifying to see the competition attract so many entrants and grow in stature within the arable community,” says Simon Smith, sales director at Countrywide Farmers.

“It is a unique event in that agronomic decisions are tested on fully-replicated field plots at NIAB trials sites local to each team. This emphasises the importance of basing recommendations on field observations and local conditions, which will influence agronomic decisions. This year there were double the number of plots and an extra four sites across the country. Our congratulations go to the talented RAU team.”

“All teams made agronomic input decisions on the winter wheat variety Cordiale at a NIAB field trials site local to their college or university, with NIAB TAG trials officers applying the recommendation to the plots,” explains the competition’s co-ordinator Ian Midgley.

Replicated plots means a proper evaluation of the entrants’ decisions with the winning entry judged on the basis of improvement in margin (£/ha) compared to a standard agronomy treatment, costing £96.85/ha. But the real focus is on engagement between students and NIAB TAG’s staff.

“The teams were encouraged to use the plots as a learning opportunity through the season, visiting the plots to make their own observations and assessments of crop development and diseases – all the time finding out more about field experimental practice and crop protection practices from trial officers and agronomists,” said Mr Midgley. “It is an invaluable learning experience.”

Coming second, and also based at Cirencester, the Countrywide Agronomists achieved a higher yield with 9.97 t/ha, but spent more on inputs at £131.63/ha.

Although Cordiale was used for all the competition plots, none achieved milling standard despite obvious planning by some of the teams.

Taking into account the fact that last year’s wheat on the same field also failed to reach milling standard, the RAU team decided against putting extra nitrogen on and possibly wasting money.

Team captain Poppy explained that their fungicide strategy was based on the team’s field observations.
They chose Adexar (ai epoxiconazole and fluxapyroxad) with Bravo (ai chlorothalonil) for T2 as septoria was present in the lowest leaves across the plots and is usually a problem in the area. Their mind was made-up following a medium warning on CropMonitor for the following week. The long-term weather forecast suggested unsettled weather so they followed up with Proline (ai prothioconazole) for T3 to protect the yield and quality. If there had been rust the team would have added a strobilurin.

The highest yielding plots were at the NIAB Berwick site. The NIAB standard plots yielded 12.26 t/ha with Newcastle University’s Team C achieving the highest competition plot yield, but also the highest input costs at £199.81/ha.
Askham Bryan College Team A spent the least on their plots at only £86.75, with a 93.56% margin against the site standard.

Where are the winning team members now?

Team captain, Poppy de Pass, is working at NIAB Sutton Scotney as a trials officer. Elice Willett is in New Zealand, on a six-month contract for Monsanto growing vegetables for seed.
Matt Clarke is in the late stages of applying to go back to IRRI to work on a C4 rice project and Elwyn Thomas is working for a contract farming business