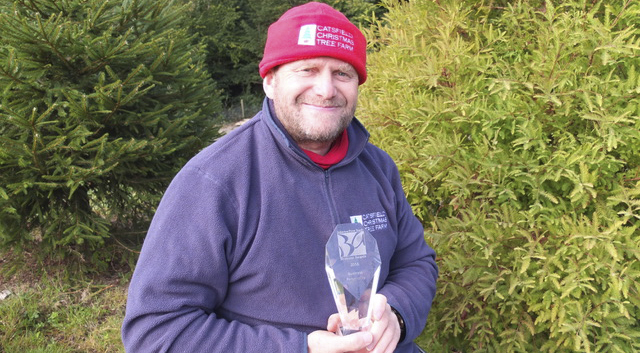 Catsfield Christmas Tree Farm has been supplying Christmas trees to the Battle, Bexhill and Hastings districts for over 25 years, and the company has one simple philosophy – to provide the best-quality trees in Sussex at the best possible prices. Customers especially like the option of choosing their tree before it is cut. Over the last 25 years, Catsfield Christmas Tree Farm has developed into a one-stop shop for Christmas – providing everything from the tree, to stands, decorations, gifts and bespoke wreaths.

What makes Clive truly remarkable is the fact that, following an accident, he sustained a spinal injury. Responding to the award, Clive’s business partner, Phil Reynolds, reflects on some of his strengths: “Using specially adapted vehicles and equipment, plus his extensive knowledge of arboriculture, he is able to do much of the work on the farm himself. His smiling face is something people have come to associate with Catsfield Christmas Tree Farm and last year he even made it onto the small screen by appearing on the CBeebies’ show ‘Down on the Farm’ with former JLS star JB. Being presented with the Business Personality of the Year award came as a huge surprise to Clive, but it is one which is richly deserved.”

The JP South Business Awards took place on 30 September 2016 at Brighton’s Grand Hotel and were sponsored by JSPC Computer Services and hosted by BBC One Show presenter, Nick Wallis.