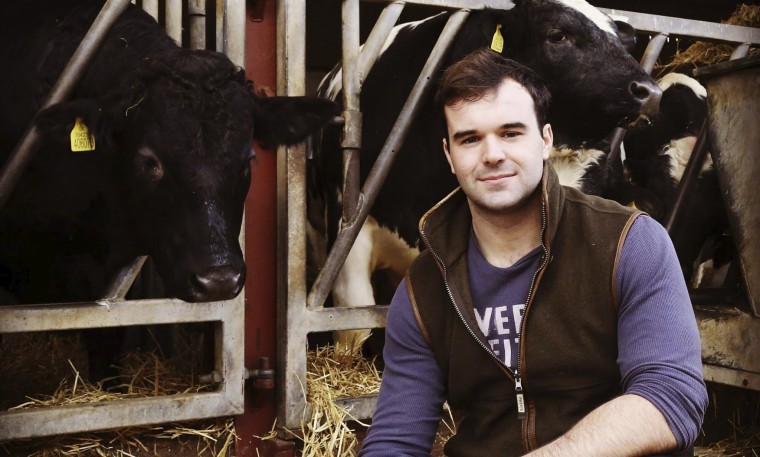 By the time Jack Stilwell had reached the start of his fourth year studying agriculture at Harper Adams University, he realised that his father’s 80 acre West Sussex farm would not support him full time.

So in 2014, he decided to strike out on his own. Online, he read about a girl raising money via crowd funding for post graduate study at Oxford. “She wanted £30,000 and within 10 days she had raised nearly £40,000.” Jack did some research to find out whether anyone had tried something similar to make a start in farming, and decided to launch his own crowd funding appeal.

He wanted £4,000, but ended up with £4,500. “For me, the money was not the main benefit of the whole exercise,” Jack said. “The publicity and awareness of what I was doing was more interesting.”

With the money raised plus other income from savings he made at university and work during harvest, he bought his first 20 calves. These 20 turned into 50, which turned into 100 and so on. Jack makes the famous chess board analogy which starts with one grain on a square that doubles with each subsequent square until a huge pile is reached on the sixty fourth square.

He’s not quite there yet, but he’s certainly on the way. With an office based on his father’s farm, Jack buys in mostly Friesian male calves and weans them. He then either keeps them in hand for store cattle production or sends the calves out to others on contracts who will farm them on before they are returned to Jack to be traded as stores. “They are very much a commodity to me,” Jack said. “We tell the contract rearers what we will buy the cattle back per kilo. They can budget for the period of time they have them. We guarantee to buy them back at 200, 300, 400 kilograms or whatever.”

The flexibility in Jack’s business – which is called Green Lanes Farming Ltd – allows the rearers to have a batch of calves coming in as another batch is leaving, which is crucial for keeping cash flow going. “I am interested in sustainable, long term relationships and looking after the people I work with.”

Green Lanes Farming is making use of male calves which have traditionally ended up as a waste product of the dairy industry. “There are still 100,000 a year being shot through no fault of dairy farmers,” Jack said. He currently has about 1,000 animals on the ground at any one time. In the 2017/18 financial year just ending, Green Lanes Farming traded about 3,000 calves: in the 2018/19 financial year, the business is expecting to trade 5,000 calves. In the last three years, the business has grown 400% year on year.

Unlike many farmers, Jack is excited by the prospect of Brexit and thinks leaving the European Union won’t hinder his growth. “I cannot sit still, and Brexit is another opportunity,” said Jack. “I operate without the basic payment scheme, and Brexit will make everyone concentrate on lean efficiency and the proper cost of production.” Jack works on a net margin per head of cattle, which allows him to bore down into the true cost of his whole system and attribute that back on a per head basis.

Any profit which Green Lanes Farming makes from this approach is always reinvested into expansion and growth. “We are trading at a high level of turnover and not taking profits away to be spent elsewhere.”

Some of those profits could be spent on more land or a farmhouse, but Jack is not interested in using his money this way. “I want all my capital to be in appreciating assets. I do not want to be a balance sheet farmer. I want all my money to be in the animals so that I can take a bit off the top and keep the capital liquid and fairly fluid.” Spending £100,000, say, on a field grazing 100 animals would lock up too much capital.

On the animal health side, he is aiming for zero antibiotic use. Preventing respiratory problems is essential with the high number of calves being reared, and this is done by attention to their environment, nutrition and preventative vaccination. “It is sensible to prevent and not fire fight,” Jack said. Green Lanes Farming is working closely with Westpoint Farm Vets, and veterinary costs are offset by having veterinary students working with the calves.

Rearing at Green Lanes Farming is done in two units – one on land owned by Jack’s father and another is tenanted. Good growth rates are achieved by automated handling, electronic identification technology and lots of weighing, recording and data analysis. The calves are fed milk powder and calf concentrates supplied by Mole Valley.

None of this would be possible, said Jack, without good people, and he now has “a great team of people.” He is keen to encourage young people to join the business, and is working with Harper Adams University on this: the first Harper Adams student starts with Green Lanes Farming in June. Jack is also launching a scholarship programme to support good young candidates in their studies – and perhaps entice them to work for Green Lanes Farming once they have finished.

A new website is being launched to promote the business, and Jack is keen to hear from farmers with calves or potential contract rearers. He emphasises that calves must be fed on 12 litres of good quality colostrum in their first three days. He collects them at between 10 and 14 days old. Anyone interested should contact Jack via his email which is jack@greenlanesfarm.com

Land will be used to start beef herd

Jamie French was lucky when he left Plumpton College in East Sussex during 2002: his father Chris had an agricultural fencing contracting business he could work with.

He has worked for the business ever since and has started up a contracting business for himself. But this year he has a new challenge: farming 67 acres of arable ground which he has rented from the Brickhouse Estate in East Sussex.

“I have the land at a reduced rent for the first four years in return for doing the fencing and putting in a new water supply,” said Jamie, who lives in a barn he converted on his father’s farm in Brightling, East Sussex.

As there was a lot of blackgrass on the land, it will be taken out of arable and reverted to grassland. Jamie began reseeding the ground last autumn and hopes to have completed it during this spring.

Jamie was aware the land was coming up because he knew the former tenant. “There is a farm building on the land which I have rented for some time because the previous tenant did not want it. The estate wrote me a letter saying they wanted to put the building back with the land, so it was a case of take it or leave it.”

The French family have always had ground on gentleman’s agreements, and Jamie has made hay for sale on some of it. He also has cows and young stock, and these will form the core of a beef herd on the land at Brickhouse Estate. In the next few months, he plans to buy in some young stock to increase the herd as mature cattle would be too expensive. “Originally, I wanted to be a dairy farmer, but the dairy market has become very volatile because of global competition.”

Jamie’s father Chris started out in farming from nothing and with no background in the industry. He worked on a local farm before going self employed. He lived in a rented farm house with farm buildings. When the landowner came to sell the farm, Chris French was able to buy it. When Jamie was young, his father had some cross bred beef cattle and Jamie helped him look after them before and after school.

“I am very lucky, because it is very nearly impossible to make a start in farming,” Jamie said. “If my father did not have a farm to work out of when I left college, I would not have had anything. That is where I gained in a big way.”

As well as general contracting, Jamie does hedge cutting, hay, silage and straw baling and any other agricultural work. On the more specialist side, he has erected the odd steel framed barn and is putting up an oak framed barn for a customer as well as continuing with estate maintenance at Brightling Park.