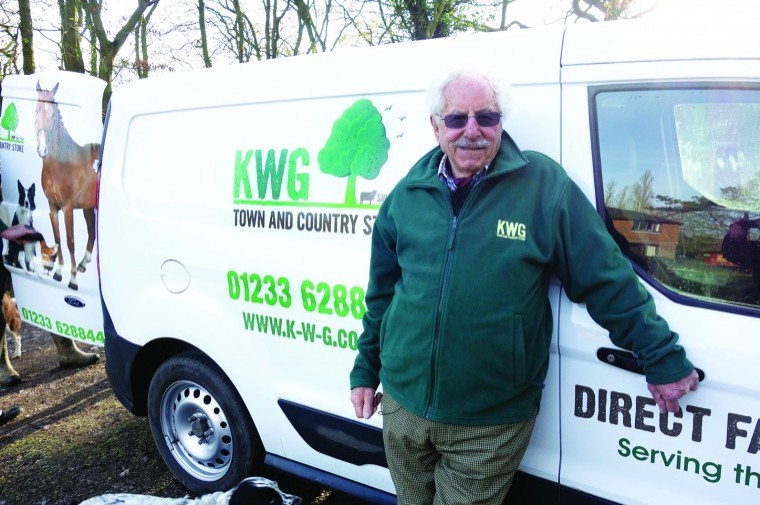 Born one year after the Kent based agricultural suppliers Kent Wool Growers was first established, ex army lad Reg has found himself plunged into the limelight as he was named Britain’s oldest salesman, still working nine to five five days a week.

With farming in his blood, Reg, who has been serving the farming community for almost 70 years, was born and raised in Harrietsham and recalls a childhood spent mustering cattle the six miles home from Headcorn Market with his grandparents, stopping overnight in a field. “Don’t work, don’t eat” his father once told him, and it seems those values have stuck.

After seven years in the army, Reg’s career in pharmaceuticals was launched, first working for Dalcinex Chemicals and then moving to Cooper McDougall & Robertson selling sheep dip.

In 1956, while he was at Coopers, he had his first encounter with Kent Wool Growers, helping to break the grasp that Boots the Chemist had on supplying farmers with medical products.

Thirteen years later, Reg – who admits to getting a real buzz out of getting a sale – set up his own veterinary pharmaceuticals company, selling medical and agricultural products to the farming community. But following 40 successful years, all his staff had retired and at the age of 93, Reg decided to join forces with Kent Wool Growers. This enabled him to still maintain the contact with his regular customers that he’d built such a strong bond with over the years.

“I’ve always stuck to two very important morals as a salesman,” Reg tells me over a slice of birthday cake. “Be honest and be reliable”, which his colleagues later reiterate.

Reg truly believes that farmers are the hardest workers in the country, getting the least praise. He is saddened to have watched farming change beyond recognition, now driven by a world market which has led to the demise of small farms, and land being eaten up.

The new found national icon – who has appeared in newspapers up and down the country, as well as on ITV news and BBC radio – says that keeping active is the key to his longevity.

“Playing so much golf in my youth was such marvelous exercise. I still go to the gym once a week and a balanced diet is important, with Sussex beef always high on the menu.

“The plan was to give it all up at 50 and play golf for the rest of my days. But I ended up packing in golf and working instead!

“I dread the thought of sitting at home: I like to be up and active.” His wife 89 year old Patricia, agrees. “He gets so bored not doing anything – he just loves work.”

Managing director of Kent Wool Growers, Peter Holmes, who organised the birthday celebration, explained why having a gentleman of such wisdom is so important.

“Reg’s knowledge and enthusiasm is what makes him so great to have on the team,” Mr Holmes said. “He still looks after 200 customers offering excellent service, always going the extra mile. Many of his customers are now retired and only have pet dogs or cats, but he’ll still happily deliver a bag of dog food to them.

“He just has so much knowledge and experience. If he ever decided to stop driving around I would want him in store teaching the youngsters. We can all take a valuable lesson from Reg’s passion for life and business.”
Reg says he has no plans to retire any time soon and is going to just take every day as it comes. Still as sharp as a pin and with all the attention being quite overwhelming, he chuckles: “If I’m a celebrity, then get me out of here!”