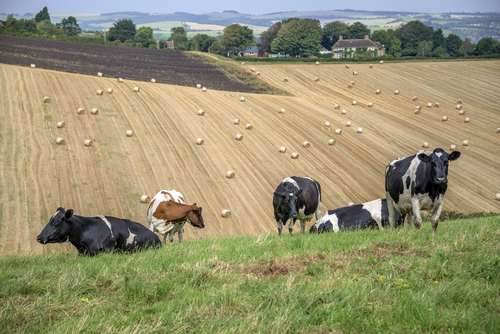 One has already been destroyed and further laboratory tests are being carried out on 17 more reactors to confirm the disease.

The cow already slaughtered belonged to the Sussex Wildlife Trust and was part of the trust’s herd grazing on Stedham Common. The other 17 are from a farm in the Iping area, near Midhurst.

“We think it has come here as a result of cattle movements,” said Isobel Bretherton from the NFU’s South East regional office. “We are worried that the disease may have crept into wildlife as well.” This is the highest number of herds in the area restricted by bovine TB since 2011, she added.

The affected cattle are all in three restriction zones set up by DEFRA around Iping, Coultershaw Bridge near Petworth and Ebernoe. In the three zones, 57 farms are now subject to an initial test, followed by another six months later and one 12 months after that.

Ms Bretherton said the outbreak was more worrying than what happened in 2011 because there is a different regime now for tackling the disease. “Once you are in the three kilometre testing zones, the on going hassle and restrictions could last for 18 months.”

The area is thought to be a low risk for bTB, which is why cattle are tested once every four years. The NFU is awaiting tests by DEFRA’s Animal and Plant Health Agency which should show the disease spoligotype, allowing scientists to pinpoint where it came from. James Power, head of land management at Sussex Wildlife Trust, said the animal destroyed was one of a group of five British White cattle which are used to graze sites which are sensitive because of their biodiversity but have poor quality grazing. “On sites with better quality grass, we can afford to let the grazing to local farmers,” Mr Power explained.

The remaining four cattle have been destroyed, leaving the trust with no small herds on poor quality grazing in West Sussex. “We are planning to re stock with cattle from a farm in a TB free part of the country.” Some years ago, the trust had a reactor grazing near Lewes, but this was a part of East Sussex known for bTB. Elsewhere in East Sussex, the trust has a small herd grazing two sites around Hastings and a herd of 60 cattle run by the trust’s own stockman near Lewes.

In addition, there are about seven sites with good quality grass where farmers graze cattle under a farm business tenancy or annual grazing licence. “We have a good sized land holding, but it is a pin prick compared to what is available across East and West Sussex,” Mr Power said. “A viable livestock industry is of huge importance to wildlife and biodiversity.”

Mr Power rejected any perception that the trust was spreading the disease by its grazing practices. “We are scrupulous in the way we implement the regulations and the testing regime. We take this disease very seriously because of its impact on what we are trying to do and other landowners.”

The trust does not back culling badgers to control bTB because the policy will make controlling the disease harder. Instead, the trust is collaborating with Sussex Badger Vaccination Project on 500 acres around Lewes. “This is the first time we have vaccinated badgers,” said Mr Power, who added that the trust has worked with the NFU and had discussions with farmers, landowners and tenants about the project.

The NFU backs badger vaccination, cattle movement controls and a roll out of the current experimental badger culls to other areas where there is a known reservoir of bTB in wildlife, such as the Peak District, Derbyshire, Shropshire and Herefordshire. “We are looking at the current badger cull model to make it more difficult for operations to be sabotaged by activists,” Ms Bretherton added.