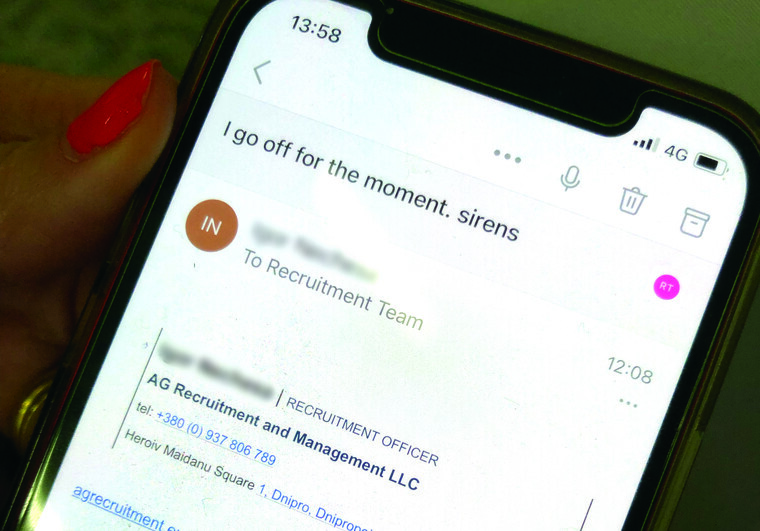 Estera Amesz, who runs AG Recruitment with husband Doug, was called from Lviv by the company’s Ukraine country manager in the early hours of the morning after Russian forces attacked.

“He said they were being bombed,” said Estera. “It was the start of several weeks that were beyond tough for all of us here in the UK. We have had to learn to cope with the heartache and focus on dealing with the problems now facing UK growers, but in the early days it was difficult to see beyond the horror of knowing what our friends were going through.”

AG Recruitment has 16 full-time members of staff in offices in Lviv, Odessa, Sumy and Dnipro, headed up by manager Taras Kovalchuk. “He’s now been issued with a gun and has been going out on night patrols around Lviv,” said Estera.

Apart from the difficulty of replacing Ukrainian workers, which made up around 70% of pickers brought in by AG Recruitment under the Government’s seasonal workers scheme last year, Estera and Doug have had to deal with the emotional trauma of knowing that colleagues and friends are in constant danger from the Russian bombardment of their homeland.

They regularly speak via a video link, allowing Doug and Estera to see the fear in their colleagues’ sleep-deprived faces and hear sirens and occasionally explosions in the background.

“It’s one thing hearing about a war in a remote country in which you have no personal involvement, but another thing entirely to know that you have friends caught up in the conflict,” Estera said. “We used to speak to staff in our overseas offices as many as twenty times a day, so we are very close.

“Now we can be talking and you’ll suddenly hear sirens going off, or the person you are speaking to will have to end the call to take shelter. These are things that you normally just come across in movies. There is a real difference when you look into their eyes and see fear and anger.”

Doug spent ten weeks in Ukraine last year, setting up the four offices in response to the difficulty of recruiting European Union workers and finding a good pick of workers. About 300 had been expected to travel to the UK the week after the Russians invaded, but Ukraine’s immediate ban on any of its menfolk leaving the country meant that only about a dozen arrived. Others immediately left the UK to return to their own country and take up the fight against the aggressor.

The Home Office has said that Ukrainian workers in the UK with a current visa can stay until December, and AG Recruitment is helping pickers and growers alike by moving workers to sites that need them, but the conflict will inevitably have a knock-on effect on labour for this summer’s fruit harvest.

Unsurprisingly, the UK is no longer issuing visas to growers from Russia and Belarus, and while Ukrainian women can still travel abroad to work, children under 18 are not allowed on farms, which adds a further restriction. “Some kind of creche operation for growers’ children would be a big help,” Estera suggested.
Meanwhile back in Ukraine, sleep deprivation is another issue, with sirens regularly sounding throughout the night. “The people of Ukraine have shown incredible resolve and great mental strength, but this is taking its toll on our friends and colleagues out there,” Estera said.

The situation is particularly poignant for her as she lived under Communism until she was nine years old in Romania, where she was born. “I was brought up in a Christian family and we had to meet in secret and keep our beliefs quiet,” she recalled. “I used to ask my mother why we couldn’t be open about it, but she just “shhhh”d me and said we could be jailed if we were caught.

“I would rather die than live under Communist rule again – and it’s similar for Ukrainians, who have seen something different and tasted freedom. They have seen the outside world and don’t want to be put back in the box.”

Of the defenders’ response to Russia’s invasion, Estera added: “They are an inspiration for the whole world.”

Doug is currently in Indonesia and is looking for other recruitment opportunities in India, Nepal, Vietnam, Macedonia and Serbia. “While our heart is with our Ukrainian colleagues, we have a duty to find the pickers our clients need and that’s what we are working hard to do,” Estera explained. “We have no choice.”

An additional difficulty is that with the Home Office focusing on humanitarian issues, it’s difficult to get growers’ visas processed, but recruiters managed to cover growers’ needs for March and achieved an impressive 80% rate for April.

“We are finding strength because we have to. Everyone is determined to get this done and we will find solutions. We are working with the Government and growers to do our utmost to provide the workforce the industry needs. Not getting the job done is not an option,” Estera concluded.