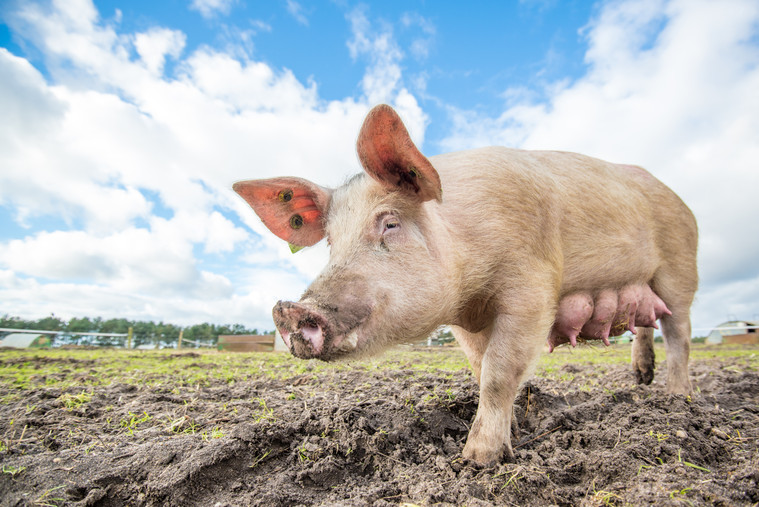 Problems with labour, input costs and the Covid-19 pandemic have left the UK pig industry in a crisis Jack described as “a bloody nightmare across the board”.

While his own operation, F J Bosworth and Sons, which he runs with father Stuart at Spains Hall, Willingale, is “treading water at best”, essentially because the arable side of the operation means they are not having to buy in cereals, he believes other producers are days away from having to cull animals they can’t sell for processing.
The National Pig Association has put forward a number of requests to government for urgent action to solve the crisis, which stems from a labour shortage in abattoirs and in the haulage industry, but has so far not received any support.

“Meanwhile the Government has paid tens of millions of pounds to an American company, CF Industries, to allow it to reopen a plant in the UK so that it can produce CO2 as a by-product of fertiliser manufacture,” Jack pointed out. “I’m very glad that CF is up and running again, but disappointed that the Government hasn’t offered more support to UK pig producers.

“The lack of CO2 would have made pig farmers’ problems even worse, particularly those who use the larger abattoirs that don’t have any alternatives to stunning animals with CO2 before slaughtering them – but this bailout is only temporary and there is no guarantee that the problem won’t return.

“It seems crazy to me that the Government was quick to step in to help a US-based business but has refused to come up with any kind of recovery plan for pig processors after a disastrous year that has seen farmers lose, on average, £25 on every pig they sell – even if they can find an abattoir that will take them.”

Jack, who is vice-chairman of the Young NPA, said the organisation had asked the Government to bring in a 12-month ‘temporary Covid-19 recovery visa’ that would allow more overseas workers to come in to the UK to fill the vacancies in abattoirs, which he estimated had lost 10% to 15% of their workforce.

“The problem may well be Covid-19 related but it’s also to do with Brexit. Whatever the cause, we need several thousand more workers so that we can start processing higher numbers,” Jack said. “Otherwise we will see welfare culls on farm, which will add another huge cost to farmers who have spent money feeding and rearing their animals before paying even more to kill and dispose of them.”

On Brexit’s role in the shortage, Jack went on: “I think the Government thought unemployed UK people would be keen to fill the jobs, but Universal Credit seems to be the preferred option for many who would rather sit on their backsides than get a job. I appreciate that not everyone is able to work, but there are too many people being paid for doing nothing.”

Alongside the Covid-19 recovery visa, the NPA wants butchers added to the Home Office’s Shortage Occupation List when it is reviewed in 2022, having had a similar application turned down this year.

“We need action now, though,” he added. “The problems are really stacking up. There are just too many pigs on farm across the whole country and welfare culls are just days away. Why can a US company call the shots while UK pig producers aren’t being listened to? There seems to be a frustrating lack of leadership here.”

The NPA also wants the English language requirement for overseas workers to be scaled back to widen the pool of available labour. “I understand that there are suitable workers in the Philippines who would be keen to come to the UK, but their English is not good enough for the Home Office’s visa requirement,” Jack said.

Meanwhile the CO2 issue could still cause problems once the short-term subsidy ends, Jack added. “A lot of abattoirs only use CO2 these days and if there is a shortage that could be the final nail in the coffin for many UK pig farmers who will face yet another hurdle.

“As an individual business we still have our heads above water, mainly because we are self-sufficient on feed as we grow wheat and barley – and our processor still uses electrical stunning – but the industry as a whole is struggling. We have all been treading water for a long while, but everyone is starting to sink a bit now.”