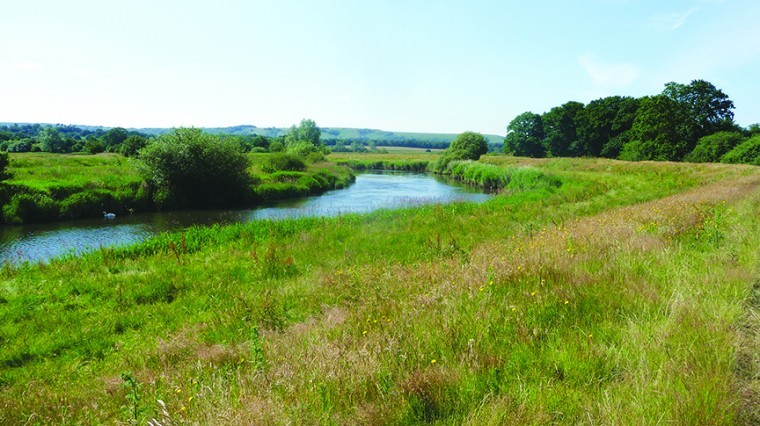 With the advent of climate change and more of the extreme weather which hit the country in winter 2014, they will not welcome a decision by the Environment Agency (EA) to pull out of all flood protection on two stretches of the River Arun.

“The EA is happy for the land along those stretches to flood,” said Derek Waller, who has been working on behalf of Arundel town council to ensure that there is no increase in the risk of flooding in the town. He has also worked with some of the farmers who own land alongside the river in the area. “Of course, the farmers and landowners are not at all happy about the EA’s decision,” said Mr Waller, who is familiar with the land in and around Arundel.

The longer of the two stretches of the River Arun at risk from the EA’s decision to cease maintenance of the river defences altogether is from Houghton to Warningcamp, and the other stretch is south of Pulborough. Mr Waller said that in future the farmers and landowners here may have to let their land flood, although as “riparian owners” they would still have a duty to keep watercourses on their land clear – particularly where not doing so would affect other people downstream.

The risk to farmland arises from two overlapping EA proposals. One is the proposed abolition of the River Arun internal drainage district (IDD) which affects the whole of the lower River Arun, and the other is the Lower Tidal River Arun Strategy (LTRAS) which, though agreed, is not yet implemented. The LTRAS identifies the two stretches of the Arun where the EA is ceasing all maintenance.

“In the case of abolition of the IDD, landowners will become responsible for the maintenance of the internal drainage board (IDB) ditches on their land, as well as any penstocks on the landward side of the ditch exits into the river,” Mr Waller said.

“However, in most areas of the valley, the exit culverts, the sluices/flap valves and the associated outfalls will remain the responsibility of the EA, as will the main river flood defence embankments.

“Unfortunately, in the case of the LTRAS areas where the EA has decided to ‘withdraw maintenance,’ not only will the flood defence embankments become the responsibility of the landowners, but so too will the exit culverts, the sluices/flap valves and the outfalls.”

Blaming the EA on one hand, and the farmers and landowners on the other, for what is happening is very difficult, Mr Waller said. “Some of the landowners have not properly looked after the ditches on their land for which they were responsible in the past, and now they will be responsible for more of the ditches in the future. Equally the EA’s stewardship of the IDB ditches has not been as good as it could have been. However, if there was to be an independent IDB in the lower Arun Valley, as is the case in much of the rest of the country, it would probably cost twice as much as now to catch up the backlog and to get things done properly, and I doubt that many of the local landowners and particularly the two district councils who fund the EA in its IDB role would support such a move.”

All nine IDDs in Kent and East and West Sussex have similar links to the EA, which currently acts as their IDB.