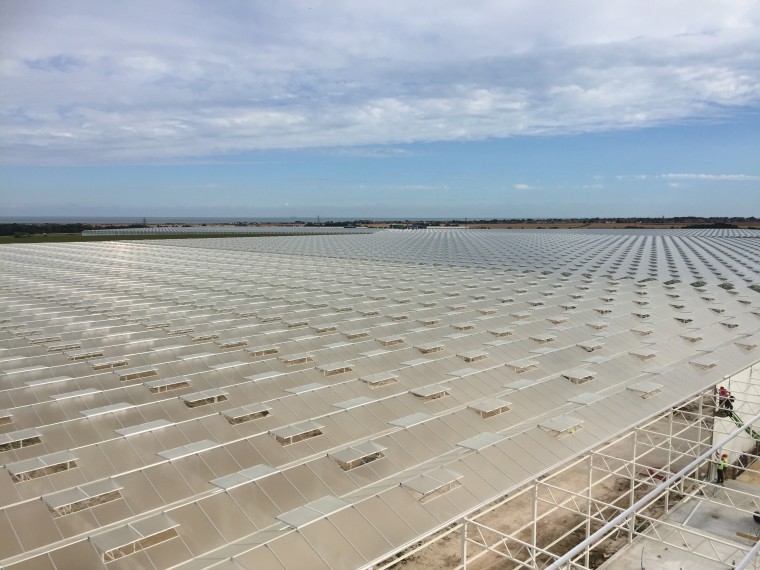 Phase one of the construction saw three greenhouses at the site on the north coast of Kent, with their first harvests in 2009. Three years later a fourth greenhouse was constructed specifically for tomato growing, and harvest began in 2013.

Thanet Earth have now confirmed that their fifth greenhouse has almost reached completion and is shortly to be filled with young cucumber plants, bringing them to almost 75% of their planned site in production.

To increase the production of capacity for cucumbers at Thanet Earth was high on their agenda following a more than 60% decrease in land devoted to cucumber production in the UK over the past 25 years.
With statistics showing that shoppers want to buy British cucumbers, but growers being unable to address inefficient production methods due to the pressures of the prevailing economic climate and strong downward pressure on retail prices for cucumbers, the high demand product must be grow in the most efficient of settings for production to be economically viable.

Judy Whittaker of Fresca said: “We know that our state-of-the-art production system shows how it’s possible to combine sustainable principles with high volume techniques. By linking grower, packer and marketeer in one entity at Thanet Earth we have created a compelling customer position that works for all partners in the very short chain from greenhouse to store.”

The new greenhouse, which is 6.35 ha in size, is equipped with electricity generating capacity, high wire growing technique for increased yield and quality as well as sodium light assisted growing. The introduction of the new greenhouse will see opportunities for 50 seasonal workers from January to December, bringing worker numbers up to around 700, and all waste from the site goes to a local cattle farmer as feed or for compost.

As with the existing greenhouses, this new production facility will make use of rainwater capture and biological pest control to maintain the site’s top tier environmental credentials. It will also increase the electricity generating capacity of the site overall to 24MW – electricity sufficient for 30,000 homes.

Des Kingsley, the managing director at Thanet Earth, is looking forward to seeing years of planning come to fruition. “For us to be helping reverse the decline in UK production and to keep this vital industry injected with new investment is very important for Thanet Earth. Consumers much prefer to buy British-grown crops, but if the downward trend in planted area continues then we risk British cucumbers becoming the rarity and not the norm on shelf. Facilities like Thanet Earth are the future for UK salad production, with scale and efficiency at our heart. We strive to be a centre of excellence providing much needed employment and opportunity, producing market-leading salad crops every day of the year.”

The first crops from the new greenhouse are expected in January 2017.