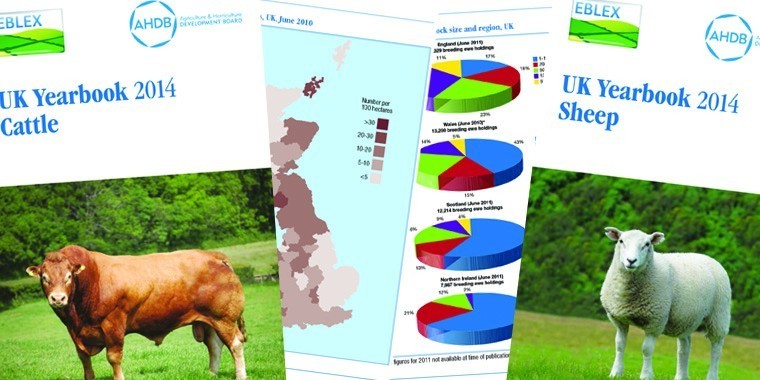 The Yearbook also revealed that, despite a poor start to the lamb market in 2013, it largely recovered, resulting in the final GB average deadweight price for the year at 414.1 p/kg – up from 401.3p/kg in 2012.

Last year was characterised as a year of two halves in the beef trade. Despite the market easing in the second half of the year, the final GB average deadweight steer R4L price was up 45p/kg on 2012 at 395.4p/kg, an increase of 13 per cent.

The AHDB/EBLEX Yearbook 2014 pulls together a broad spectrum of statistics, providing farmers, auction markets, processors, retailers and other stakeholders a full and accurate picture of UK beef and sheep meat production. It includes information on production and exports, as well as data on livestock numbers, consumption, slaughterings, auction markets, abattoirs, livestock and meat prices and carcase classification.

Charlotte Garbutt, AHDB head of data and analysis, said: “The Yearbook is an invaluable resource for beef and sheep farmers and the wider industry. It plays a crucial role in providing them with an array of key information to help them make important business decisions.”

The book is available free of charge on request, subject to availability. To request a copy, email redmeatMI@ahdb.org.uk or call 024 7647 8711. It is also available on the EBLEX website in two pdf files, one for sheep and one for cattle. They can be found in the Market Intelligence Publications section of the EBLEX website www.eblex.org.uk.