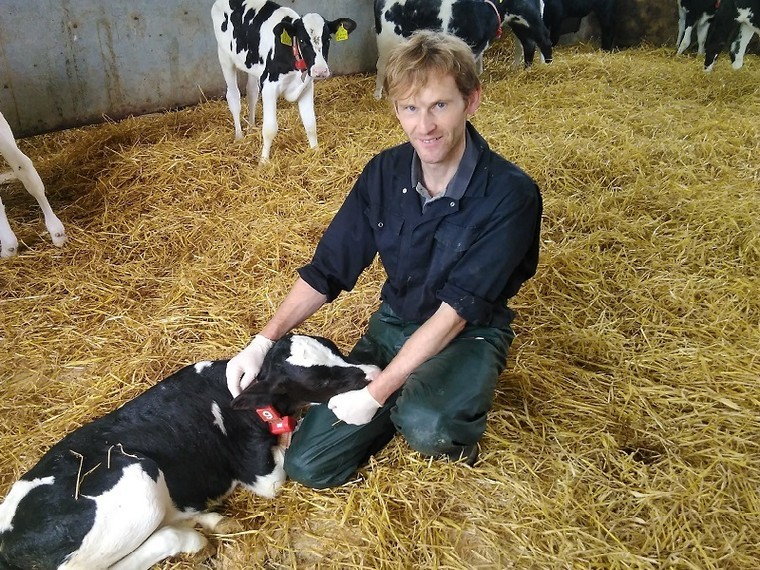 The vaccine, which has been used in the US for several years, has since 2019 been assessed in a four-farm case study in Scotland by Graeme Fowlie at Meadows Vets, with the help of Dutch pharmaceutical firm Kernfarm. Since then it has been used by more than 56 vet firms across the UK under the VMD’s Special Import Scheme, with excellent results.

The farm case studies demonstrated significant reductions in antibiotic usage and post-weaning mortality in dairy calves, while of the 40 vet practices surveyed, three-quarters rated the vaccine’s efficacy at 80-100%. More than 87% of them said they had seen reduced clinical signs and treatment required after using it, with 37.5% seeing improved response to any treatments used. Some 45% experienced reduced culling and mortality, with 22.5% witnessing improved weight gains or milk yield.

“Mycoplasma Bovis is a very difficult infection to treat once it is established,” explained Alan Wilson at North Vets, Orkney. “The vaccine reduced infection rates and the need for antibiotics.”

Alistair Moir from Buchan Vets, Strichen, Aberdeenshire added: “M. Bovis is already more widespread than first thought. It causes more underlying health issues than is generally appreciated. I suspect it is often behind chronic non-resolving illness in individual animals which is having a welfare and economic impact on farm productivity.”

Until the vaccine was approved for use in the UK, the only option for farmers affected by M. Bovis – which causes pneumonia, mastitis, swelling, sore joints and otitis – was to have an autogenous vaccine created. But they can be expensive and time-consuming to produce.

“Compared to autogenous vaccines available in the UK I perceive the efficacy to be far better with fewer side effects,” said Ruth Fraser at Strathspey Vets, Grantown-on-Spey, Highlands. “However, it should not be considered a magic bullet; if other respiratory pathogens are implicated these also need to be dealt with in addition to environmental factors.”

Most vets were vaccinating beef cows six weeks pre-calving and dairy cows eight weeks pre-calving where possible, and then calves at three to six weeks of age. And 85% were recommending other routine vaccines, mostly against respiratory diseases. “The effect upon the farm I have used it on has been brilliant,” said Tom Jackson, Haywood Farm Vets, Market Drayton, Shropshire. “From a situation where a large number of cattle were dying despite good husbandry and treatment protocols, the holding now experiences extremely low rates of clinical pneumonia and mortality, with greatly improved average daily live weight gains too.”

Elske Put of North Park Veterinary Group, North Tawton, Devon, successfully used the vaccine in a dairy herd which was suffering from M. Bovis-related morbidity and mortality in milking cows. “It was obvious when the farmer forgot to vaccinate in-calf heifers; a few subsequently got ill after joining the milking herd,” she says. “This has improved now that heifers also are vaccinated.”

M. Bovis is notoriously difficult to treat, as it does not respond to most common antibiotics. At a time when farmers are under increasing pressure to reduce antibiotic use, prevention is therefore a much better option. “M. Bovis can cause significant disease problems with poor response to treatment,” says Neil Roberts, Dalehead Vet Group, Settle, North Yorkshire. “Vaccination does seem to help and is cost effective.”

Patrick Finnegan from Farm Vet Services, Clogher, County Tyrone, NI, started using the vaccine on a dairy herd to control calf pneumonia: “Once we added this new vaccine into a fairly extensive vaccination programme we noted improved performance of the original vaccines amongst the calves,” he said. “It seemed to be the final missing piece of the puzzle. The response has been better than good – we’re really pleased.”

The disease has many different presentations, the control of which requires a multi-factorial approach, says Suzanne Dorresteijn-Hadders DVM, technical specialist with Kernfarm. “Using an M. Bovis vaccine within any control programme often requires a bespoke approach depending on clinical signs in the herd, age of stock affected and herd management.”

Advice on potential application of any vaccination protocol is available from Graeme Fowlie at Meadows Vets on thevets@meadowsvets.co.uk.

· Publication of the data and results from the original 2019 field trial is in progress.