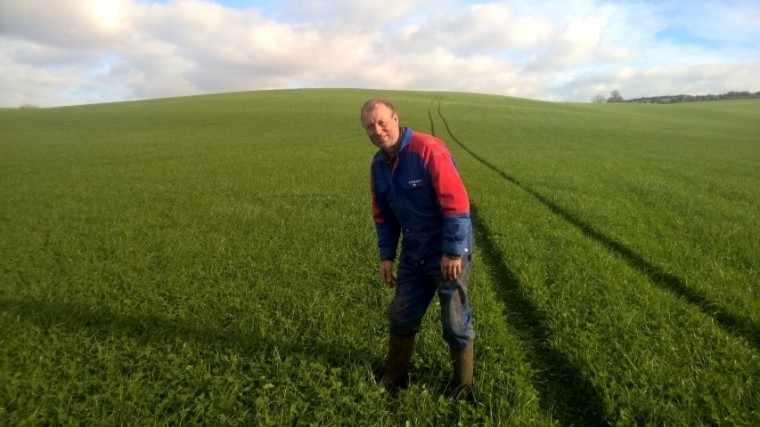 Following last year’s wet autumn, many farmers did not manage to reseed poor leys – and the cold, wet spring has compounded the problem, leaving many producers extremely short of fresh and conserved grass, explains technical business manager Nick Duggan. “A lot of farmers have finished their own forage stocks and have had to buy in extra supplies – the situation is so tight that the NFU has relaunched its Fodder Bank service to match up buyers and sellers.”

In addition, grass growth remains well behind last year, with AHDB recording daily growth rates of 39.17kg dry matter per hectare in the week to 13 April, against 64.7kg/ha at the same time last year.

“However, reseeding a long-term grass ley now will not produce sufficient forage in the short-term, whereas sowing an arable silage crop – like a pea and barley mix – offers a cost-effective way of producing high quality additional feed,” explains Mr Duggan.

Under-sowing the arable mix with a longer-term ley would then ensure decent quality grassland further down the line. “This is a great way of making up for lost time and could be one of the most economic and practical ways of replenishing forage stocks this summer, along with restoring unproductive fields.”

Mr Duggan suggests sowing a spring barley and pea mixture, and cutting seed rates by 10-15% to allow the grass to establish successfully. “Just before emergence of the arable crop, you should either drill or broadcast the grass seed mixture at a full rate – and roll the seedbed afterwards to consolidate it.”

The arable silage should be ready for harvesting 14-16 weeks from establishment, yielding around 8t/ha dry matter. The under-sown grass can then be left to establish further before grazing after 4-5 weeks or mowing at 7-8 weeks.

“For farmers who are in dire need of decent forage this summer and winter, an undersown arable silage crop could provide the answer,” says Mr Duggan. “The important thing is not to panic, choose your varieties carefully, and get it right first time for optimum efficiencies both now and in the years ahead.”

Richard Lovat used an arable silage mixture at Hutton Grange Farm, Oxfordshire last year, sowing Advanced Protein Plus (a 3-4 year intensive cutting mixture of festuloliums with 20% red clover) into 28ha of a pea and barley mix in May 2017. “Both crops established well and the arable silage was harvested in the middle of July, yielding 14.8t/ha,” he says. “The grass and clover recovered well and we managed to cut it again six weeks after the initial harvest.”

The second cut yielded 15 round bales – or 11.25-12t fresh weight – per hectare. “The high proportion of red clover in the mixture gave us excellent levels of protein in the ration,” explains Mr Lovat. “It regrew so well in the autumn that the herd was let onto the ley at the start of November to graze off the lush growth that developed. This year we are looking to take 4-5 cuts of high protein and high D-value grass silage. We should easily achieve this from the vigorous re-growth I’ve seen from these festuloliums so far.”