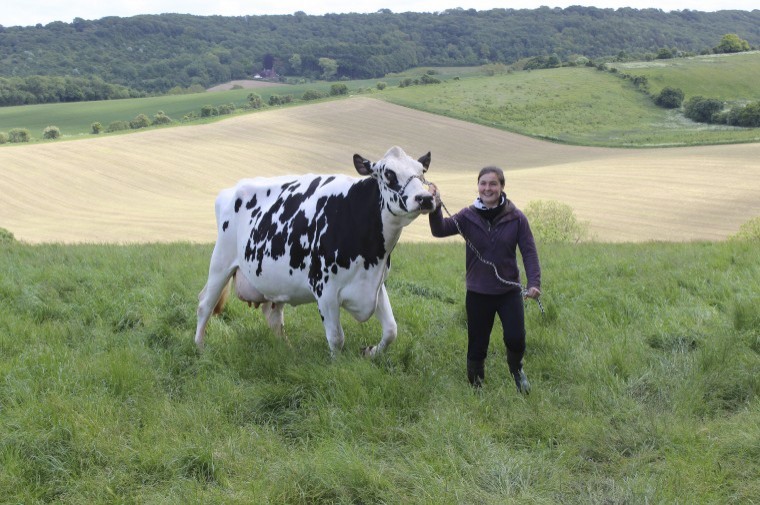 The three winners – Holly Berreen (23) from Dartford in Kent, Shaun Rennie (21) from Mossblown in Ayrshire, and Lizzie Bradley (20) from Quebec in County Durham – will take part in Germany’s major dairy cattle show, known as the Schau der Besten. The three winners will become involved in feeding, milking and preparing and exhibiting some of Europe’s top show cows at the event – responsibilities they regard as a great honour, as all are knowledgeable and accomplished showmen in their own right.

The show – literally translated to The Show of the Best – is organised by Germany’s market-leading breeding company, Masterrind, whose headquarters are in Verden, the epicentre of European Holstein genetics. Masterrind’s daughter company in the UK is Mastergen, who have organised the competition and whose portfolio of bulls includes the UK’s largest offering of German Holstein genetics.

The three British prize-winners will join others from throughout Europe and as well as taking part, they will also have the chance to see early daughters of some of the leading Holstein bulls in Europe, some of which they’ll hope to use in their own herds.

All three of the winners – selected for persuading the judges they would gain the most from the opportunity – say they are eagerly awaiting the show.

Holly Berreen (from Kent and who also featured in the BBC’s ‘The Farmers’ Country Showdown’ this week), says she ‘lives and breathes cows’. Working with a herd of 300 commercial, pedigree Holsteins, she takes responsibility for calf rearing, some milking and preparing the farm’s show team throughout the summer months. She and her partner have also started to breed their own Holstein cattle under the Holben prefix which they hope can be developed into a fully-fledged genetics business.

She says: “I relish the hunt for the perfect bull and want to continue learning for my Holben Holsteins adventure. I’m very passionate for the dairy industry’s future and hope that at this year’s Schau der Besten I can learn from the best.”

Shaun Rennie (Ayrshire) works with his family’s cows and he too has recently started to breed a nucleus of cattle with his own prefix. He says: “I think this trip will create a fantastic chance to work with some of Europe’s top cows and at the same time, enable me to build on the knowledge and experience I have previously gained at home and at shows. Working with these cows will allow me to take new skills back home which will help further my own herd in the future.”

Lizzie Bradley also grew up on her family farm where 130 pedigree Holsteins are milked under the Langpark prefix. Having completed her Level 3 diploma at Askham Bryan College and now moved on to Harper Adams University, she still finds time to indulge in her passion of showing cows. She says: “Showing cattle has been a huge interest of mine, traveling around showing under my family’s prefix and being lucky enough to show for many top herds at some of the top shows. This will be an amazing opportunity to be able to travel and see dairying abroad and a great step for my future.”