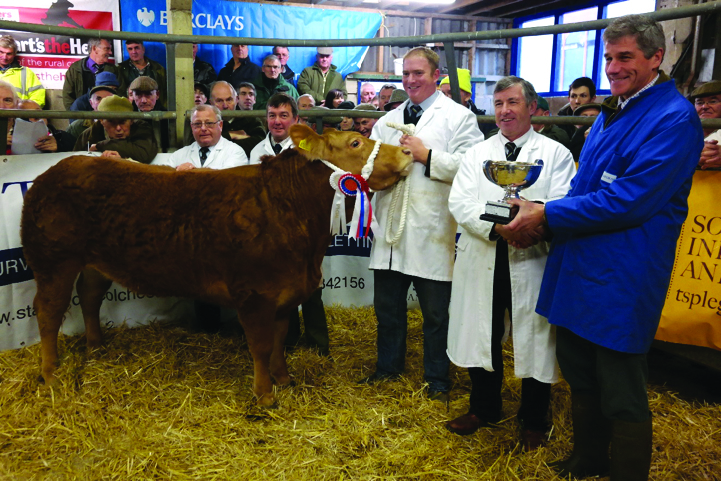 Exceptionally difficult times, but at least by the end of the year we had seen some stability return and the dark days of late summer and the long waiting lists to get into abbatoirs and only the livestock markets kept trade moving, were a somewhat distant memory.

By the end of the year the store cattle trade had fully recovered and was indeed dearer than 12 months ago, somewhat difficult to understand when finished producers earlier in the year had been complaining about returns.
In Colchester the Prime Stock Show was held on 2 December and this again was a tremendous event with a great atmosphere from start to finish. The show cattle classes well supported with superb quality cattle in all sections.
Mr William Newman of P C Turner of Farnborough kindly agreed to judge the show being a third generation of that family to do so following his grandfather Bob and his father Mark.

William carried out his judging with an expert eye and finally awarded the overall Show Championship being the Olivers Perpetual Cup for the Champion Beast, The Broad Oak Farm Perpetual Cup for the Best Butchers Beast under 550kg and the Best Limousin Heifer in the Show to regular vendors to Colchester Market, W A Ketley and Sons, Colchester represented by Gerald, Andrew, and William Ketley and three very young grandsons of Gerald Ketley. After strong competition the beast weighing 539kg was sold to John Coleman of Boxted, Colchester for his retail shop at 390pkg, £2,102.10 per head. Both the vendors and buyer being regular supporters of Colchester Livestock Market.

The judge had a difficult job all day and the Reserve Champion was also a superb animal, and the trophy was finally awarded to Bruce and Julie Woodward of Needham, Norfolk for the Best Steer over 550kg in the market being awarded the Roy Brazier Memorial Trophy and also the Best Limousin Sired Steer in the show.

This after strong bidding was sold to Swanton Morely Butchers of Norfolk at 400p/kg realising £2,404.00.

The Arthur Chalke Perpetual Trophy for Best Heifer over 550kg was also awarded to the Ketley Family again purchased by John Coleman again for his shop.

In the Unhaltered Class David Coe trading as C A Coe and Son, Great Wenham took both the Joe Papworth Memorial Trophy for the Best Unhaltered Heifer and also the Best Unhaltered Steer.
The heifer was sold to George Debman, Retail Butcher, Ipswich at 330pkg and the Steer to Will Newman for P C Turner Farnborough at 285p/kg, £1,621.65.

Generally however it is clear to say the show cattle had a tremendous trade averaging 283.81p/kg. A tremendous result reflecting the quality forward.

The sheep show saw a lower than normal entry, which is disappointing. Despite this, the judge Mr John Coleman of Boxted had a difficult task, awarding the final overall championship for the William Gray Perpetural Challenge Trophy and the Colchester District Meat Traders Perpetual Trophy to Mr Nigel Barrington-Fuller of Weeley Heath for a pair of Beltex lambs. These subsequently sold at auction for £170.00 per head to the judge.

The George Debman Trophy for the Best Lambs over 40kg awarded to P G Colwill and Sons, Shotley for another pair of superb Texel X lambs which sold to George Debman, Ipswich for his shop at £175.00 per head 380p/kg.
Generally the cattle trade through December was weaker than 12 months ago, which was disappointing with all retail butchers complaining of a lack of real Christmas spirit leading up to Christmas and subsequently trade somewhat subdued.

What was noticed was many more heavy cattle coming forward in the sale rings with producers trying to put weight on to maximise returns, but in all honesty sometimes weight was not paying and cattle may have been better sold a month ago. Finish all important, fat not wanted but meat required!

Let us hope that 2015 returns to levels where producers can have a satisfactory return.

Early December saw a sharp rise in the sheep market prices with all lambs keenly competed for. As would be expected the week before Christmas somewhat more difficult but still realistically a good trade. Presentation of sheep all important, extreme wet weather not helping with many lambs coming forward with excess mud and being too wet.

Prospects however do look set fair for the Spring although much will depend on the Euro against the pound.

The pig trade very disappointing in December with prices falling each week, again with horror stories of very low prices being taken in parts of the country. How many times have we said the lack of pigs going through Auctions has meant there is no stability in the pig trade.

There is little true competition in the pig market and this is generally now affecting producers particularly smaller ones who have difficulty in maximising returns. It is to be hoped that the situation will return to some stability in the new year, at least we have lower wheat and barley prices although these were increasing again towards the end of the month. Not a happy end of year for pig producers.