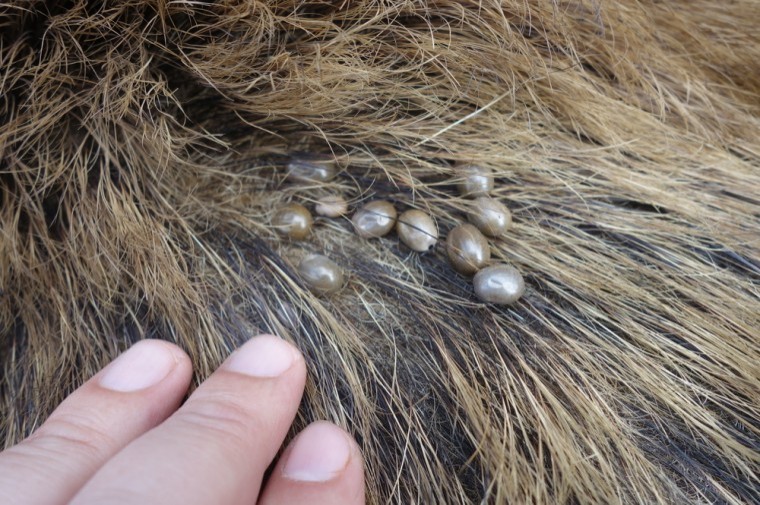 Traditionally ticks tend to be a problem associated with sheep grazing dense vegetation in upland areas such as the highlands of Scotland and Northern England. This year though farmers could see more widespread problems as sheep graze marginal areas looking for grass.

Moredun Research Institute suggest ticks are spreading geographically and increasing in numbers mainly as a result of climate change2.

Farmers in tick risk areas may need to consider using an acaricide to protect their sheep.

Graeme Mathers, who farms at Shandford Fern, Brechin, and also manages sheep on the Glenogil Estate, said using the acaricide DYSECT® has been vital in controlling ticks on the hill.

Mr Mathers has been involved in various trials on controlling ticks since 2002. In a trial when a proportion of sheep were left untreated they were each covered in 30-40 ticks compared to no ticks in the treated group. Now the 1,300 strong estate flock is treated using DYSECT throughout the year. As a result, tick numbers have reduced on the hill.

Mr Mathers said: “There are still little pockets on the hill where ticks are a problem, but the situation has improved drastically.”

“At one-time grouse chicks as well as other wild bird chicks were being overrun with ticks and dying. This is now not the case.”

Although Mr Mathers has not had any confirmed losses to ticks, he suspects he used to get tick-related losses. “The estate sheep are on the hill and we would always lose a few, but we never found out why. Since managing the ticks those losses are a lot less,” he said.

Mr Mathers believes as a country more should be done to control ticks. He said: “Ticks just multiply massively. When we first started looking at controlling ticks on the estate our neighbours thought we were mad as the problem was so bad. But we have proved through hard work and determination by regularly protecting our stock you can manage them. Many farmers in the area are now doing the same.”

Due to a shortage of forage, this year sheep may be forced to eat longer vegetation on field boundaries which are more prone to ticks. Vet Dr Dave Armstrong from Zoetis encourages farmers to monitor the situation.

“Ticks prefer warm and humid environments, so current conditions are perfect for them. Using DYSECT means your stock is covered for 8-12 weeks protecting them from ticks and the diseases they spread. If ticks are a problem, then speak to your vet or SQP to device a specific tick control plan for your farm,” he said.

Acaricides like DYSECT are the main form of tick control. DYSECT has one of the longest protection times of 8-12 weeks against ticks and also provided protection blowfly, headfly and lice.