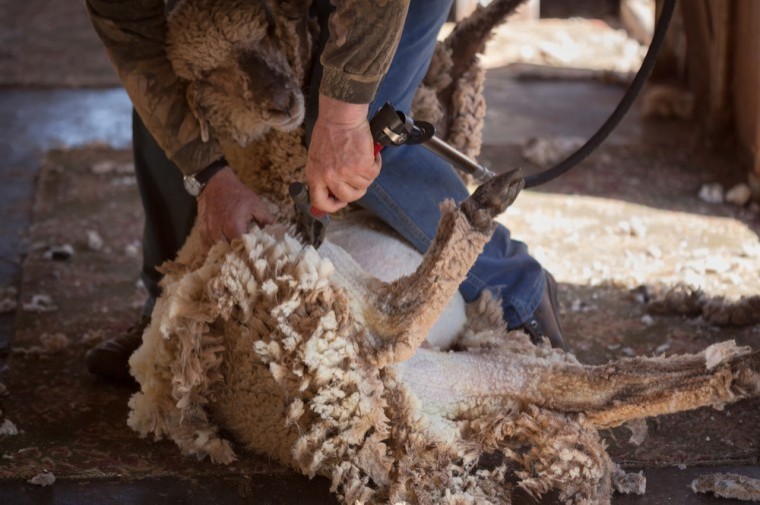 It’s the first time an attempt of this kind has ever been made in the UK, or indeed anywhere in the Northern Hemisphere. The current World record stands at 721 ewes in nine hours, and was made in 2007 by Rod Sutton of Porangahau, New Zealand. To beat this Matt will need to shear each sheep in less than 45 seconds.

With the support of the British Wool Marketing Board (BWMB), this hugely demanding challenge will take place on 26th July, at Trefranck Farm, St Clether, Launceston, in Cornwall – Matt’s home farm.

Bedwyr Jones, chairman, BWMB Field Services committee said: “This will be a unique occasion, the first time anyone in the UK has attempted this world record and we are behind Matt all the way as he takes on the challenge. Shearing is vital to the sheep industry, and a hugely popular activity. Matt is helping showcase British wool to a wider audience helping move the whole industry forward. On behalf of the British Wool Marketing Board I wish him the very best of luck in what is, without a doubt, a phenomenal task.”

Matt’s entire working life has been involved in the sheep shearing industry and he already has his name in the record books. In 2010, at the age of 25 he set a world record for the Eight Hour Strong Wool Record in New Zealand shearing 578 sheep and beating the record by 18.

Matt has shorn in seven countries across the world including New Zealand, UK, USA and many parts of Europe. He has won several shearing titles, and has had his sights set on the Nine Hour Ewe World Shearing Record ever since he learnt of its existence. Born and raised in New Zealand, Matt left school aged 14 and has been shearing ever since. He first came to the UK to shear when he was 17 years old, shearing with Gavin Mutch, a former World Shearing Champion. The following year, he returned to the UK and sheared across the South West, where he is still actively involved working with Nick Jasper’s shearing gang.

It was while he was shearing in Cornwall that Matt met his wife Pippa. The two are now settled in Cornwall, with their son Dusty, where they farm in partnership on Pippa’s family farm. Together they started their sheep farming enterprise with 360 ewes – today they run a flock of 1,385 breeding ewes, primarily Romney’s with some crossed with the Lleyn.

The Nine Hour Ewe World Shearing Record, world record attempt is no mean feat and is equivalent to running three marathons back to back – it’s therefore absolutely imperative that Matt’s in peak condition. Since the New Year he has been following a very strict diet and fitness regime, which will now dovetail with his shearing schedule across the South West, in preparation for the record itself in July.

Matt said: “I am eager to take on this huge challenge. I am proud to have learned from some fantastic shearers throughout my career, and I genuinely look up to all the other shearers who have inspired me over the years, starting with my own father.”

In addition to supporting Matt’s own ambition, this competition is also supporting Children’s Hospice, Little Harbour, and proceeds from the event will be donated to the Saint Austell based Charity.

Matt is keen to encourage the next generation and hopes that his mission to secure a World record will be successful. He has this message for up and coming young shearers: “Never stop learning and listen to advice. Every day is a challenge. You have to have a goal to aspire to. Maintain your determination, and never give up.”

He acknowledges that the shearing training provided by the BWMB is vital to encourage, and provide opportunities to the next generation. The BWMB’s shearing trainers are passionate and highly motivated, which is essential in encouraging young people to take up shearing – and Matt is also seen as a great role model for a new generation of shearers.

“I’d like to thank the British Wool Marketing Board for their invaluable support in this world record attempt,” adds Matt. “The shearing training they offer is an unmissable opportunity to any young shearer, or for anyone who wants to brush up on their skills.”

As Matt begins his preparation, the BWMB’s own shearing courses begin across the UK and take place between May and July.

Bedwyr Jones continues: “Shearing is currently enjoying a revival amongst the younger generation, so Matt’s world record attempt is without a doubt an excellent way to both raise the profile of this important industry skill, and to encourage even more young people take up competitive sheep shearing.”