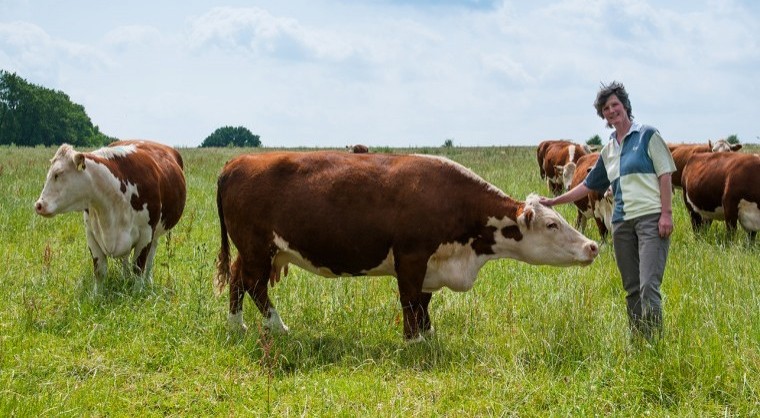 Launched in 2011, the PFLA is trying to persuade consumers to buy beef and lamb which is raised entirely on grass and forage crops.

Fidelity Weston, who farms near Sevenoaks in Kent, is a director of the PFLA and will be launching the association’s new “Pasture for Life” brand in Kent during an Open Farm Sunday at Romshed Farm on Sunday 7 June.

The PFLA is a community interest company led by farmers which encourages beef and sheep producers to finish their animals on grass and forage crops alone with no cereals. The PFLA says this has many benefits for consumers, the environment, the animals and farmers who can charge a premium for the meat.

One of those at the Open Farm Sunday event will be Andrew Lingham, who has featured in South East Farmer, is a tenant on the Plantlife reserve at Ranscombe and who has a butchers shop at Court Farm. He will be cooking “Pasture for Life” burgers at the event and Kent Wildlife Trust will also be there, providing meat from one of their pasture fed Dexter cattle.

Mr Lingham used to finish beef on cereals in a yard but could not make money from the operation, so he is planning to sell just “Pasture for Life” meat from cattle on the reserve and buy in meat from farmers such as Ms Weston. “Andrew is just getting his farm shop registered with the association and in the long run will only sell pasture fed beef and lamb,” Ms Weston said.

She is registered organic with the Soil Association and has a small herd of 16 traditional Hereford cattle and a flock of 135 Lleyn ewes, as well as pigs and poultry. “A lot of our members are organic, although you do not have to be.”

The PFLA has about 130 members, some of whom are approved farmers and some approved butchers. “Some farmers are not yet signed up to be approved suppliers because they have not got outlets,” Ms Weston explained.
“And some butchers are still crying out for suppliers.” Membership costs £50 and approved farmers and butchers sign up to standards. “You are then subject to self assessment and could be subject to an inspection. We have designed that so that it could be done alongside other inspections run by the Soil Association or Red Tractor farm assurance at very little extra expense.”

Inspections are risk based and done every year: if they are not done on the back of another scheme, they cost up to £250.

Ms Weston said membership benefits include an online listing on the association’s website which can bring in a lot of customers. “We hope we can get a small premium for our meat, too – and some butchers do offer a premium for pasture fed meat.” She gave the example of Eversfield butchers, managed by Mark Bury in Devon, which is offering a 2.5% premium above the organic price.

Ms Weston sells as much of her meat as she can directly from the farm. “Anglo Dutch Meats (ADM) normally takes any lambs I cannot sell and they disappear into Sainsbury’s. But I would rather sell to Andrew Lingham – and I hope he will pay me more than ADM!” She pointed out that farmers who have introduced mob grazing to improve soil fertility and improve arable crops are often also members of the PFLA because they value their grass. “We are making high grade silage to keep cattle through the winter and can graze longer into the wet season because we are not poaching the ground.”

Although Ms Weston is organic, she no longer promotes her beef and lamb under that label. “I am pleased to promote it as pasture fed. Most people who see the word organic think you are expensive and we are not. Our half lambs and our boxed beef are sold at a price which is just below organic but just above top of the range non organic.”