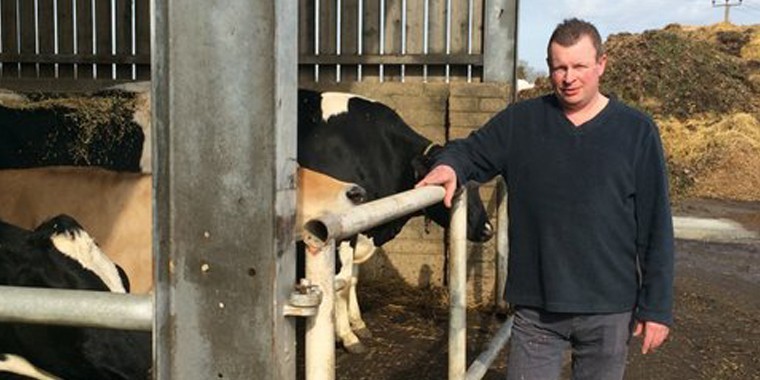 “The aim is to balance the diet so we can produce the maximum amount of milk from grass and forages. That’s why all cows stay inside on the TMR mix for the first 100 days even in summer, but when we turn them out they still have access to the feed troughs,” says farm manager John Trott.

The herd, which supplies milk to Marks and Spencer, has also recently started to introduce Jerseys with the intention of bringing Channel Island numbers up around 20% of the total herd to help lift butterfat levels.

The Holstein cows – which include four individuals achieving 100 tonnes in the last year – have an average yield of 9968kg at 3.69% butterfat and 3.2% protein. The Jerseys are currently averaging 7700kg at 4.9% fat.

The TMR diet – aiming to feed for 30 litres of milk – comprises 50% grass silage, 30% wholecrop, 20% maize, Trafford Gold, caustic wheat, rape soya, urea and minerals. Cows are also fed up to 8kg of an 18% concentrate feed in the parlour during two millings.

The 1700 acre unit grows 125 acres of wholecrop and 30 acres maize but because the land isn’t ideally suited to maize it may be phased out and replaced by whole crops.

Around 150 acres of grass is taken for first cut and 100 acres for second and there is a block of 50 acres of grazing around the farm made up of five-year leys of white clover and ryegrass.

“The way we feed cows here isn’t just about producing milk. The rationing is equally important for cow health and fertility.” The herd has a calving index of 396 days.

All silage making is undertaken by contractors and is treated with Envirosystems’ Optimize silage additive. Grass is cut with a mower-conditioner and wilted for 24-hours. After rolling the clamped silage is covered with two layers of plastic sheeting, netted and topped off with rubber mats.

“The Optimize additive we used wasn’t as expensive as previous additives and did an excellent job,” says John Trott.

And the benefits have been quantifiable in cost terms by the way the silage was used in the diets last winter.

“The winter before last we were using 3kg of rape-soya blend; last winter we were able to reduce that all the way through to just 2kg.

The rape-soya blend is costing £255 a tonne so the cost saving per cow per day was 25p. Making a saving on that feed across 250 cows every day of the winter was certainly worth having. And our production improved too.”

John Trott admits that while feeds costs have to be monitored the priority is to feed a diet that will enable cows to express their full potential and achieve the maximum number of litres sold per cow.

“But if we can achieve that and also get more production from high quality forages so much the better.”

“The triticale likes our ground. We might get better ME levels from wheat but we wouldn’t get the yield.”

All wholecrops are ensiled together and layered in one clamp.

“Wholecrop suits us well and adds some structure to the diet because we tend to cut the grass silage quite young. But this year we’re we’ll be evaluating all the types of wholecrop we’re growing because maize may be taken out of the cropping plan.
“We did question if we should include wholecrop in the TMR mix being fed during the summer but we found that treating it with Optimize avoided spoilage in the clamp and any digestive issues.”

The farm’s grassland re-seeding policy will see a move away from the existing Italian ryegrass mixes which haven’t been performing well on the farm’s gravelly soils.

After a visit to an organically run dairy farm, John Trott has decided to sow 100 acres of red clover perennial ryegrass leys as part of a three-year rotation system.

“We have to cut early to get a second cut because third cut is a non-starter. We need to make 3000 tonnes of silage and cows are also fed 2kg of hay per day.”