» Cows by The Mall 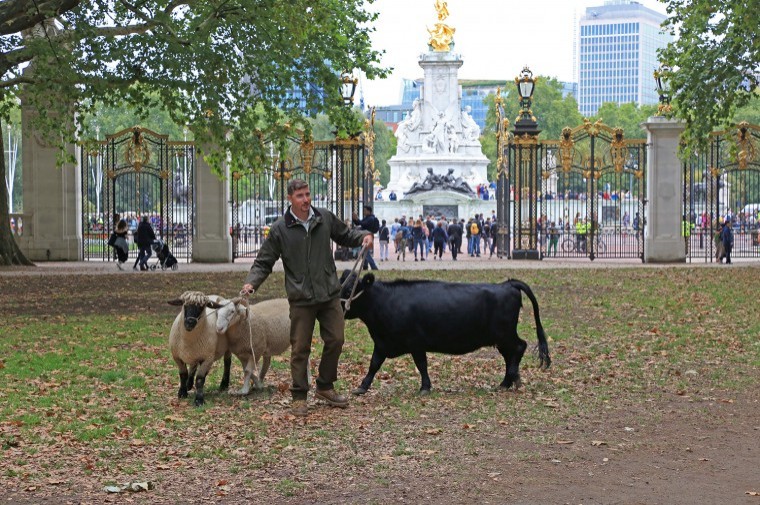 Cattle joined rare-breed sheep to graze in the shadow of Buckingham Palace from Bank Holiday Sunday, as part of a conservation trial to help wildlife thrive in The Green Park.

The Royal Parks charity has joined forces with the Rare Breed Survival Trust and Mudchute Park and Farm to bring the animals to central London, following a successful pilot with sheep last year. Between 26 August – 2 September, the animals are spending their time grazing one of the park’s wildflower meadows. This will help a greater range of flowers and grasses to grow, to the benefit of pollinating insects including bees, butterflies and hoverflies.

The grazing trial is one of a host of invertebrate-friendly measures being taken by The Royal Parks in connection with its Mission: Invertebrate project. The project, supported by players of People’s Postcode Lottery, is enabling ecologists to discover more about the insects, spiders, snails and other invertebrates that call the parks home, and to use what they learn to help them thrive across London’s green spaces.

Livestock grazing is a valuable technique for increasing biodiversity in parkland and has an important role in wildlife conservation. Traditional native and rare breed cattle and sheep are able to chew and digest the tough, hardy plants that can take over pastures and prevent other more delicate species from establishing, diversifying the food sources available for invertebrates. The animals also pass seeds and trample them into the soil, helping meadows to regenerate year after year.

Four-legged visitors are not new to the Royal Parks. Until 1905, fresh milk from tethered cows was a popular treat for Londoners walking in St James’s Park, while up until the1930s, farmers would bring livestock from as far afield as Scotland to graze on The Green Park’s pastures, before selling their meat at Spitalfields Market. Unlike their less fortunate ancestors, this week’s four-legged visitors will return home to Mudchute Farm after completing their shift.

Dexter cattle have been selected for the trial, along with Oxford Down, Southdown, Whitefaced Woodland and Black Wensleydale sheep. These native breeds have been grazing on the plant species found in The Green Park’s meadows for centuries, and play an important role in maintaining the unique biodiversity of some of Britain’s most treasured landscapes.

It is hoped that farm animals browsing the parks of central London could once again become a regular sight. Following the trial, Mission: Invertebrate experts plan to record numbers and species of insects, spiders and other invertebrates in the meadows and compare these to last year’s results, adding to these findings over the coming years.

Dr Alice Laughton, who is leading the Mission: Invertebrate Project, said: “We are excited to be building on the success of our sheep-grazing trial last year, by welcoming two bovine guests to our visiting herd. As they eat larger volumes and rip up rather than nibble plants, cows open up pasture far quicker than sheep, encouraging insect-friendly species to flourish. They also tend to prefer different varieties to their woolly counterparts, so will make perfect grazing companions.

“Even this busiest of parks, right in the heart of central London, can be home to ideal habitats for invertebrates. In turn, these little creatures pollinate plants, break up debris and provide a food source for birds and small mammals – they are truly the cornerstone of biodiversity. Through Mission: Invertebrate, we are working to champion livestock grazing and other invertebrate-friendly measures and encourage people of all ages to learn about these tiniest – but most vital – inhabitants of our parks.”