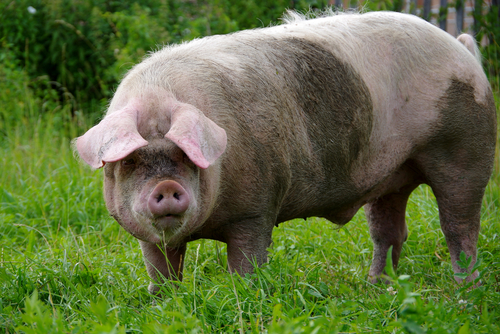 Highly virulent Asian-American Porcine Epidemic Diarrhoea virus has spread to Europe. The disease is extremely infectious — a thimbleful of manure from an infected pig unit is sufficient to infect the entire British pig population.

It is impossible to guarantee Asian-American PEDv will not arrive in Britain on a traveller’s shoes or clothes, or on the wheels of a lorry, says the National Pig Association. Therefore all pig-keepers must consider themselves personally responsible for ensuring it does not get onto their own farm.

Producers should pay special attention to vehicle biosecurity. In particular no pig lorry should be allowed onto any pig farm unless it has previously been thoroughly cleaned and disinfected, says NPA.

The highly-virulent strain of PEDv is not in the European Union yet but it is in the Ukraine, which borders the European Union countries of Poland, Slovakia, Hungary and Romania. It was discovered in mid-Ukraine by internationally-known British vet Dr John Carr, who has now had the strain sequenced in Britain to confirm his suspicion that it is the virulent Asian-American strain, and not the European strain.

Dr Carr cites a well-run commercial 5,000-sow unit in Ukraine where  30,000 piglets died over a matter of weeks, equivalent to the loss of six weaned pigs per sow per year. He warns that with such high mortality, it is essential to be concerned for the mental health of all stockpeople when a unit breaks down with Asian-American PEDv.

His worry now is that the highly-infectious disease could easily spread to the European Union. He stresses it is essential that no live pigs are imported into the United Kingdom from countries with PEDv and he warns that all pig producers should introduce impeccable transport biosecurity routines.

The European Food Safety Authority has confirmed the disease has no zoonotic capacity and is therefore harmless to humans. But in the United States it has wiped out over a tenth of the pig population in the past two years, causing up to 100 percent mortality in piglets on infected pig farms.

However the Canadian pig industry has demonstrated it is possible to control the spread of PEDv if the disease is identified quickly and no movements on or off the infected unit are allowed by the farmer concerned. Working on the Canadian model of early identification and total industry cooperation, the English Pig Health and Welfare Council has been formulating a contingency plan since April and this is due to be rolled out soon.

Meanwhile the statutory pig levy paid by English pig-keepers is funding free testing of diarrhoea samples at government animal health laboratories, to help ensure the disease is picked up promptly if it arrives on a British pig farm.