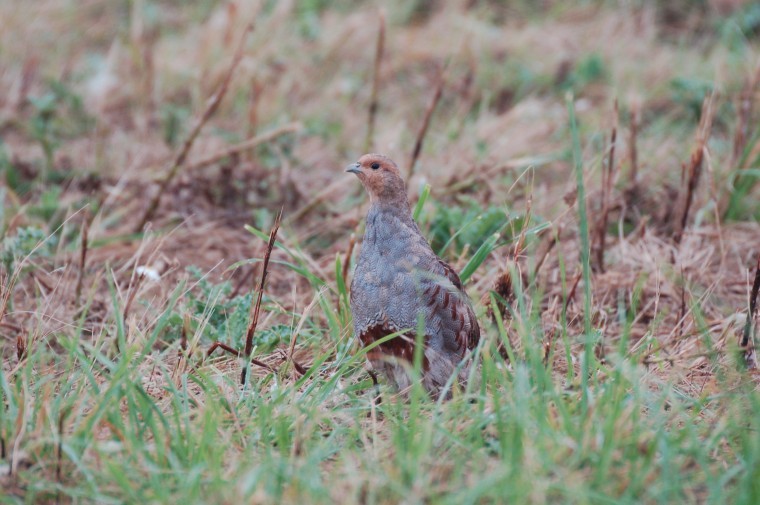 Running since the early 1930s, the the Partridge Count Scheme provides essential information to the Game & Wildlife Conservation Trust (GWCT). This voluntary scheme asks those taking part to spend a few hours to count the wild grey partridges on their land in the spring and autumn to better understand what is happening on the ground. In return, they receive guidance and feedback on how they can strengthen their efforts.

Why the grey partridge?

What might seem to many as another dusty grey-brown farmland bird is celebrated in some circles as a conservation icon for farmland. Heralded as “the barometer of the countryside” wild grey partridges are a great indicator of wider farmland The grey partridge faces many of the same challenges as many other farmland wildlife – food supply, nesting cover and the impacts of predation. If a partridge can thrive and produce a good number of healthy young that survive to the following breeding season, other species will too, especially other struggling farmland birds.

One important distinction about the grey partridge – especially useful for those taking the time to count them – is that the young remain together with their parents through the autumn and winter as family groups known as coveys. When it comes to counting, this doesn’t just make life easier, it reveals vital information about their breeding success.

Why should you count?

There are many reasons people have taken the time to count their partridges for over 80 years. For some, it’s simple a passion for the countryside and not wanting to lose this iconic bird from their ground. For others a level of nostalgia plays a role, having had more when they were young they would like to see a stronger population again. There’s also a social aspect – farmers and landowners get together through regional partridge groups (also arranged by GWCT), allowed to look around another farm that’s demonstrating success and camaraderie that they aren’t alone in trying to help.

“Being aware of your grey partridge population is a real asset” says Neville Kingdon, who runs the Partridge Count Scheme for the GWCT. “It helps to better appreciate what’s happening on your ground (both the good and the bad) and in understanding how management you do for the birds is affecting them, and what might need changing to see further improvement”.

What started small, with around a dozen “partridge manors” in the closing years of the reign of George V, is now a nationally important set of data that shows changes across more than three-quarters of a century and has become one of the largest farmer-led monitoring schemes in Europe. One key benefit of this evolution is that farmers are increasingly aware of the importance of this data record. In the last decade, many involved have used their count record as supporting evidence of their interest to help farmland wildlife when applying for environmental stewardship funding.

Any farmer, landowner, land manager or gamekeeper who has the time to dedicate a few hours in the early morning or late evening and feel comfortable that they know what they’re looking for. Importantly, you don’t need to have many partridges. It is important to encourage those who hold on to one or two pairs as they can do something to help. There’s no “quick fix”. It’s a long journey that requires many small steps to make progress. “There are thousands of farms across the country who still have a pair or two. If each could increase their wild partridge numbers to four or five pairs – we’re not talking about impossible numbers here – then it would go a long way towards reversing the huge decline the grey partridges have suffered over the last 50 years.

“Those who manage the land are crucial, not just to how the partridges and other wildlife fare, but to understanding what is happening on a local and national level. Without the counts we get back, it would be impossible to know how changes in farming, climate and policy have affected partridge numbers” says Neville. “It’s important to get a picture across the country, and the more counts we get, the more we can do to reverse any declines”.

Those keen to help their grey partridge can join the count by visiting www.gwct.org.uk/pcs