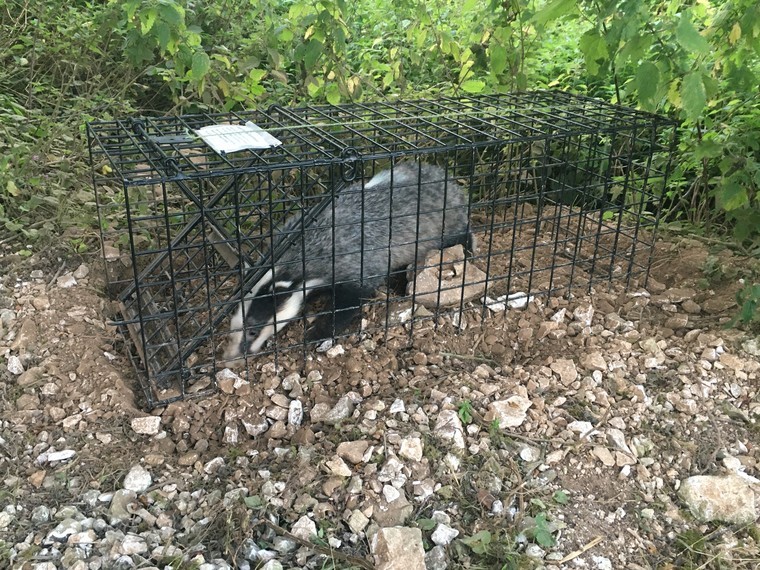 A five-year project to vaccinate badgers against bovine TB is up and running in East Sussex. The project’s first badgers were vaccinated at the end of August 2021 in the Cuckmere Valley area – a hotspot for bovine TB in cattle.

“Vaccinating the first badgers as part of the VESBA (Vaccinating East Sussex Badgers) project was quite a milestone,” explained Dr Lindsay Heasman, the VESBA Project Manager from Hurst Animal Health.

“We held a farmer meeting back in June 2018 to gauge the appetite for such a project, and since then the team at Cliffe Vets has worked hard with local farmers and stakeholders including the NFU to get the project off the ground. Since 2020 we have secured DEFRA funding for the full five years, trained local farmers and obtained the necessary licence from Natural England – all in the wake of the Covid-19 pandemic. To actually see the first badgers being vaccinated meant such a lot to me.”

Bovine TB is a devastating disease that can be transmitted between badgers and cattle. East Sussex is in the Edge (intermediate) TB incidence area of England, and a ‘hotspot’ of TB has been present in the Cuckmere Valley area for many years. TB bacteria have been isolated from badgers, meaning that the local wildlife population is harbouring infection and can re-infect cattle – but badger vaccination offers the opportunity to break this cycle.

Whilst badger culls underway in other parts of England, Defra has set out the next phase of the TB strategy, which commits to phasing out culling, replacing it with more government supported vaccination, as well as increased surveillance and a deployable cattle vaccine. The VESBA project aims to find out the key factors for rolling out badger vaccination on a larger scale. The VESBA project will vaccinate badgers across 250 square kilometres of East Sussex every year for four years – with a target of vaccinating 675 badgers annually.

Although badgers can live for up to 14 years, the typical lifespan is three to four, which means that at the end of a four-year vaccination period, the level of TB in the wildlife population should have declined. With farmers adhering to biosecurity measures to reduce cattle-to-cattle and badger-to-cattle contact, as well as making responsible purchasing decisions, the next few years could see significant reductions in TB rates in East Sussex.

VESBA differs from many other badger vaccination projects as farmers are at the core of delivery, as opposed to vaccination activities being undertaken by wildlife groups and volunteers. “At the end of the day, no one knows their land like the farmers, and this is a key aspect of the project, explained Dr Heasman. “The farmers are also close at hand to undertake the daily pre-baiting which is essential for getting badgers used to entering the cage traps. Through the VESBA project, we have also trained a small group of people to undertake the actual vaccinations; these individuals are well-known and trusted in the local farming community, which is essential to maximising the amount of land that is signed up to the project.”

Vaccinating badgers involves a significant amount of preparatory work. Each farm or site needs to be surveyed, to understand where badger activity is greatest. The survey maps are sent to Natural England so that a licence can be issued; badgers are a protected species, so it is illegal to “kill, injure or take (trap)” them, or to interfere with places they use for shelter or protection – setts, in this case.

Once areas of activity are identified, we start introducing a food bait that badgers love; they will dig to find the bait even when it is buried a few inches underground. When badgers are reliably finding the bait points, the team will start putting out the cage traps, and as the badgers become accustomed to the traps, the bait points are moved inside them, but with the doors wired open so that the badgers can come and go as they please.

After around two weeks, the traps are set ‘live’ in the evening, and the following morning at first light the team can vaccinate the badgers. Before being released, each badger has a fur patch clipped and a stock marker spray applied to identify badgers that have already been vaccinated. The process is repeated for one more day, with re-captured badgers released without a second jab.

The vaccination season for badgers is between May and November, so the team is currently busy surveying and vaccinating the farms that have already signed up to the project for years one to four. VESBA is keen to hear from farmers and landowners in the target areas for years two to five.