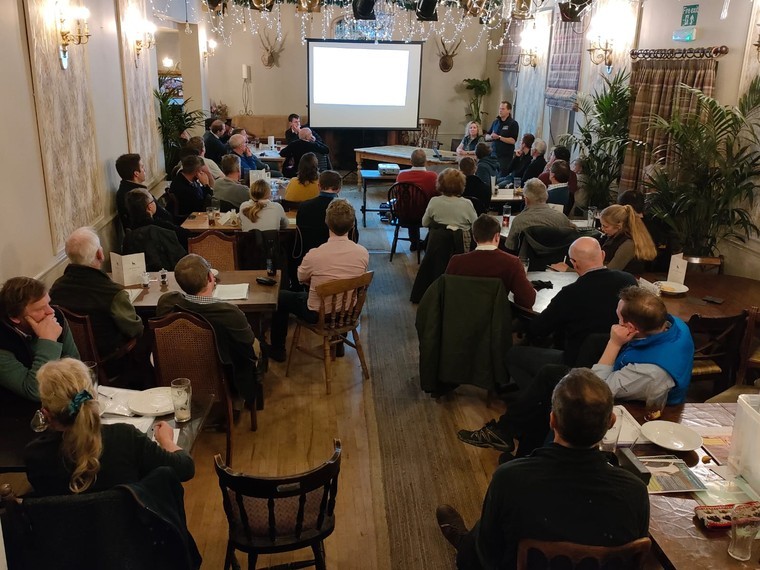 “We had a fantastic turnout,” said Nick Pile from Cliffe Veterinary Group, “and it was great to hear that many more farmers will be taking part next year.”

VESBA is a five-year project, fully funded by DEFRA, to deliver a farmer-led, large-scale badger vaccination project across the southern part of East Sussex.

At the meeting, farmers heard about the progress made in Year 1, which included obtaining the necessary licences and insurance, training four lay vaccinators and undertaking sett surveys across 20 square kilometres of the project’s target area.

“Although the vaccination season runs from May to November, we were only able to start vaccinating badgers at the end of August,” explained Dr Lindsay Heasman from Hurst Animal Health, the project manager.

“It gets more difficult to tempt badgers to enter the cage traps later in the year – when there is an abundance of their natural food sources, such as fruits, berries, crops and earthworms – so we are really pleased to have vaccinated 78 badgers this year. It’s a great testament to the effort put in by everyone involved in the project.”
Bovine TB is a significant burden to cattle farmers, and in areas where TB bacteria have been found in badgers, they are clearly a potential route of infection for cattle. Badger vaccination is one tool that can help in the fight to eradicate bovine TB by reducing infection in endemically infected wildlife populations.

The VESBA project aims to vaccinate badgers across a 250 square kilometre area of East Sussex every year for the next four years, but to be successful, widespread farmer engagement is critical.

“In order to vaccinate badgers, we need the farmer or landowner to sign a land access agreement that allows us to add their land to our vaccination licence,” Lindsay continued. “After that, the level of involvement in the project is totally up to each individual.

“The vaccination process starts with conducting a sett survey, which is best done in winter or spring, when the vegetation has died back. The actual vaccination process takes around two weeks and involves digging in the vaccination cages and pre-baiting to get the badgers used to entering the cages. Vaccination then takes place over two consecutive mornings, before the cages are removed.”

At the meeting, it became clear that some farmers were very keen to take on some of these tasks while others were happy to allow access to their land but preferred to delegate the work to trained members of the project team, all of whom are well known in the local farming community.

“We are happy to talk to individual farmers to see what’s the best solution for their farm,” added Nick. “We understand there are peaks and troughs of work in the farming year and hope that some farmers will be able to get involved directly, but others may prefer to nominate a farm worker or gamekeeper to help out. As the project is fully funded, we are able to pay for time spent on the project.”

The VESBA project is the first of its kind in England and will help inform DEFRA about how best to deploy future badger vaccination schemes on a large scale. The Parliamentary Under Secretary of State at the department, the Rt Hon Lord Benyon, recently visited East Sussex with other officials to see the project in action.

“Lord Benyon was able to see some badgers being vaccinated and had the opportunity to chat with farmers and members of the project team,” said local dairy farmer Peter Appleton, who chairs the VESBA Steering Group. “DEFRA is keen to understand the factors that are critical for the success of a large-scale project, and in my opinion this has to be engagement with farmers, landowners and the local rural community.”

Anyone who was unable to attend the meeting but is keen to become involved in the project should contact Dr Lindsay Heasman on 07912 799961 or email Lindsay@hurstanimalhealth.co.uk