» System watches fruit ‘fall asleep’ and then keeps it there 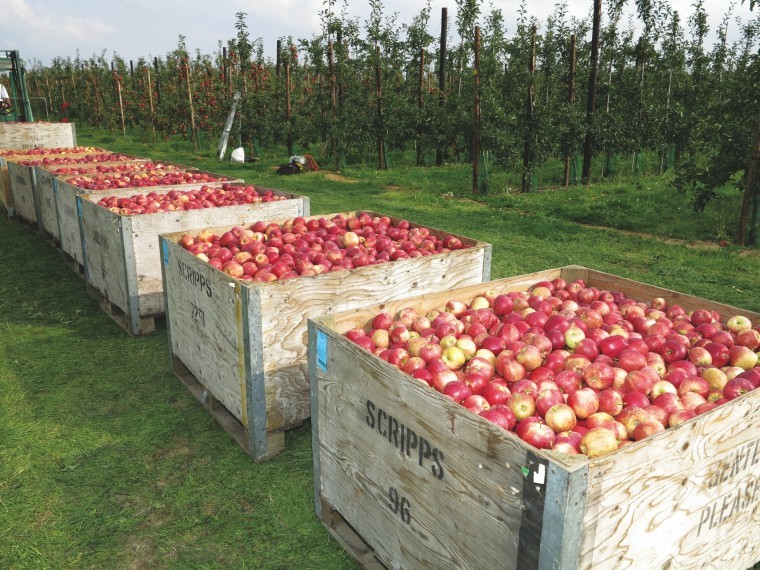 With pear prices set to be hit by a huge over-supply of fruit from countries such as Belgium following the imposition of Ukraine-inspired sanctions on exports to Russia, managing director James Simpson is feeling rightly pleased about the decision in recent years to shift from pears to apples.

“Belgium is looking for a market for 300,000 tonnes that would normally have gone to Russia,” he explained, “and that is bound to have an impact across Europe.”

The situation has been made worse by the fact that an EU intervention scheme for fruit growers who regularly export to Russia was put on hold when officials realised businesses were claiming compensation for more fruit than they could possibly have produced.

Not that James is claiming that the decision by Adrian Scripps to stop investing in new pear orchards in 2005 had anything to do with his political nous. “The fact is that the UK climate just isn’t great for pears,” he explained. “We don’t have cold enough winters or warm enough springs to produce a good skin finish.”

The flipside of the decision, though, is that modern varieties of apple deliver a far bigger yield than an equivalent acreage of pears, which meant calling in Robinson Structures to build 12 state-of-the-art cold stores ready for this year’s harvest.

It’s a set of initials that will almost certainly be heard more and more in the coming years, but at the moment Adrian Scripps is only the second UK grower to have installed this type of cold store, and the scheme at Moat Farm is the biggest to date.

The DCA equipment, supplied to Adrian Scripps by UKCA, is manufactured by Italian firm Isolcell. It involves constant monitoring not just of the conditions in the store but of the apples themselves – or, at least, a sample – to ensure that they are kept in just the right condition.

“In effect the system watches the respiration of the apples and when that drops to the right level the cold store holds the temperature and the other variables at that point,” said James. “In a sense it watches them fall asleep and then keeps them there.”

That active monitoring, which is done by checking the amount of fluorescence produced by the chlorophyll in the skin, goes one better than existing CA stores, which keep the gas and temperature at pre-determined levels that reflect the grower’s best guess at what they should be, based on past experience.

“We expect the DCA system to extend the storage life of the fruit by several weeks and keep it in the best possible condition,” said James.

Being able to store fruit for longer gives the grower more control over selling the crop, something that is likely to be particularly important this year. “The weather this spring wasn’t good for external skin finish, which makes it more important to be able to release fruit when the market is right, which in turn means having the right amount of quality storage,” he explained.

The building by Robinson Structures is 27m wide by 61m long and 8m to the eaves, with a fibre cement roof and a single skin box profile exterior. The bottom one metre of the exterior panels is made up of Ventair vented panels that allow cool air to be drawn up into the roof space to prevent a build up of pressure in warm weather.

Torran Construction was brought in for the groundworks and the insulated panels were by Paddock Wood-based ICA. Another Kent firm, East Peckham-based P J Electrical, carried out the wiring.

The cold store was given planning permission in 2006 as one element of a larger scheme at Moat Farm, but was not commissioned until this year because it was not needed. The footings, though, were already in place, something which James said highlighted the quality of the Robinson Structures building.

“When Robinsons came in to survey the existing foundations, we realised that the steels they planned to use were bigger than had been used by a previous contractor on similar buildings on the site,” he said. “There was a discernible difference in the quality of the steel.”

As regional director Alex Robinson explained: “We are committed to delivering a high standard of building and we increased the size of the steels for our own peace of mind as much as anything.

“We tend to treat this kind of project as an industrial job rather than an agricultural one and so we make sure it is more than fit for purpose. We don’t try to be the cheapest but we do try to give good value and deliver the best possible quality.”

Contracts estimator Charlie Highton added: “Steel sizes are one thing but we also pride ourselves on our focus on the fine details like material interfaces, door flashings and neat guttering.”

James was pleased not just with the quality but with how easy the process was. “I wanted a trouble-free project so that I could get on with the day job – and that was exactly what I got,” he said. “It was a very smooth build.”
The timescale was tight but good teamwork by the various contractors ensured that the £1.3m project was completed and commissioned ready for this season’s harvest, which is likely to top 15,000 tonnes of home-grown fruit.

The new cold store comes on the back of investment of close to £3m last year in a new building and packing facility at Moat Farm and reflects continuing growth by Adrian Scripps.

The grower has orchards across Kent, from Wingham to Cobham and from the Medway Valley to Brenchley, with all the produce stored, packed and distributed from Moat Farm. The current cropping includes 102 hectares of Gala, 63 of Braeburn, 33 of Bramley, 15 of Jonagold and 32 of Kanzi™ along with 28 hectares of Conference, Comice and Concorde pears.

“Ten years ago we were perhaps one of Europe’s biggest pear growers, with 100 hectares, but demand has been static in recent years and there are cheaper imports available so we have steadily reduced our pear orchards and left them to the Continental growers,” explained James. “UK growers just can’t compete on either quality or price.”

Adrian Scripps has supplied Tesco for more than 30 years and has focused solely on the supermarket for the past 12 years. He believes the recent trend by some growers to change marketing organisations regularly can be counter-productive.

“Switching customers to gain in the short-term is not always the best way to do business because it doesn’t allow a relationship to develop,” he said. “If you can develop a good understanding with your customer it helps both parties and is much better for business in the long term.

“As a grower we want to understand what our customer wants and to have clarity about where we are both going. Changing marketing desks every five minutes doesn’t allow that kind of relationship to develop.”