Pioneering a pack house for the future - South East Farmer 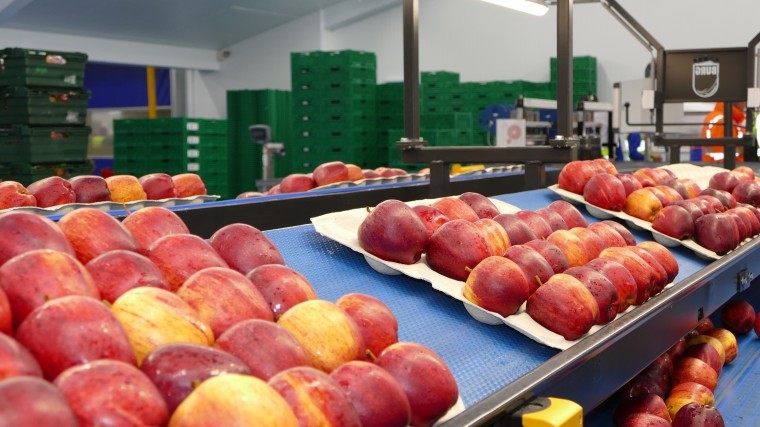 Future proofing is a vital step for any family business, particularly in an industry where technology is rapidly advancing, availability of labour is uncertain and minimum wage set to rise.

Regular readers of South East Farmer may recall our last visit to Bardsely Farms, in Chart Sutton, Kent as Ben was unveiling his new pre-sizer and grader and dynamic controlled atmosphere (DCA) stores.

12 months on and the project is already a year ahead of schedule with Helen Grant MP visiting the site on Friday 27 October to officially open the newly equipped pack house, offices and staff welfare suite.

Having invested £5.1m since 2015, the site has been transformed from a very traditional grower’s pack house to a state of the art, industry leading facility. Alongside the 26-lane pre-sizer and grader and 26 DCA stores, the 9,700 sq m pack house has been fully refurbished internally and during just six weeks of downtime eight packing lines were installed.

As well recognising the need to modernise in the rapidly changing fruit industry, Bardsley Farms’ long-term business model has also been driven by demand.

With the site at River Farm now capable of packing 400 bins in a 12-hour shift, Ben is working with over 30 growers from Mid Kent Growers, Direct Produce Supplies and UNIVEG UK, part of the Greenyard group, to supply four major supermarkets and a range of wholesalers and distributors.

The firm’s unique joint venture with Greenyard is still in its infancy but the investment, support and continuity of the product is enabling Ben to work with them to pioneer what he believes will be the most efficient, vertically integrated supply chain in the country.

“Greenyard has been the catalyst for the entire project,” said Ben. “The investment has allowed us to increase the amount of fruit we can process. In 2015 we were packing 3,000 tonnes, but this year, 2017, we are looking closer to 20,000 tonnes, which is impressive growth over two years.”

Working hard to keep the business profitable, the investments into robotic machines and technology have been centred around reducing the costs of labour per kilogram, an equation which Ben is working on all the time.

“As the minimum wage increases, every automated machine we have invested in becomes more and more viable and, certainly on the packing line, when you look at the return on investment this is happening quite quickly,” said Ben.

One of the new additions to the packing process, the Flex Filler, has simultaneously doubled productivity while reducing labour by 300% and according to calculations will have paid for itself in just one year.

After being automatically fed onto the grading line, 150 pictures are taken of each apple to detect size, quality, weight, colour, sugar levels and internal defects. Graded fruit is returned to pre-sized bins, which are then put into cold storage between one and three degrees Celsius depending on variety.
As orders are received, pre-sized bins are picked and transferred to the packing line by an automated robot. Fruit is then fed in by robots and there is a human quality check before it is wrapped, packed into crates and put out for dispatch.

“The robots have made the process much simpler, they set the pace and less people are needed,” said Ben. “As a result, we have been able to reduce our labour costs per kilo by 30% in the past two years. I am hoping we can reduce this to 50% with the final stages of the project.”

Ben’s vision for the pack house, storage, office space and welfare suite has been brought to fruition by a team of dedicated project managers and contractors who have worked tirelessly to ensure that what you see today is exactly how Ben imagined it.

“When I was in the Army one of my Generals used to say, always think to the finish and you will do well in life and that’s what has driven this project,” said Ben. “We have all hit our targets, and although there was real time pressure to get the pack house running in time the Wealden AM team managed it very well.”

“When you engage in large projects where there are big commercial outputs you have got to have the right team around you to get the project implemented. With Wealden AM project managing I have managed to get that team.”

Having had stage two and three of the five-stage growth plan officially opened, the project is now a year ahead of schedule.

To provide employees with a better working environment, upgraded facilities now include a modern office and board room, large canteen, improved toilet facilities, locker room, hand washing area, and training rooms where staff can learn how to optimise their packing and quality checking skills.

“Good labour is getting much harder to find and people are becoming harder to keep, so we as a business are doing all we can to provide our employees with the best possible environment to work in,” explained Ben. “It’s not just about how much you pay them but also about how they feel at work and if you can offer the right hours. If they are happy that goes a long way.”

Looking after staff morale, the importance of which Ben Bardsley learnt during his time serving in the Army, combined with the uncertainty hanging over the availability of a migrant workforce as the UK prepares to leave the EU, Bardsley Farms is driving forwards a new ‘parent shift’ scheme. Operating from 9am till 3pm, the parent shift is aimed at local mums and dads looking for a consistent job which is guaranteed to fit around the school run, a concept which Ben hopes will make pack house work more appealing for the local population.

Moving forwards for the growing business, the next stage for Bardsley Farms will see the labour force further dispersed throughout the business with the addition of end-of-line robotics in the pack house, including picking machines and palletisers.

“We won’t be cutting any jobs, but with the end-of-line robots we will be able to do more with the same staff and I am hoping we can look towards packing double the current volume,” said Ben.

With his sights set on becoming one of the biggest top fruit pack houses in the country, the final stage of the development plan will see the DCA storage increased further to help extend the availability season.