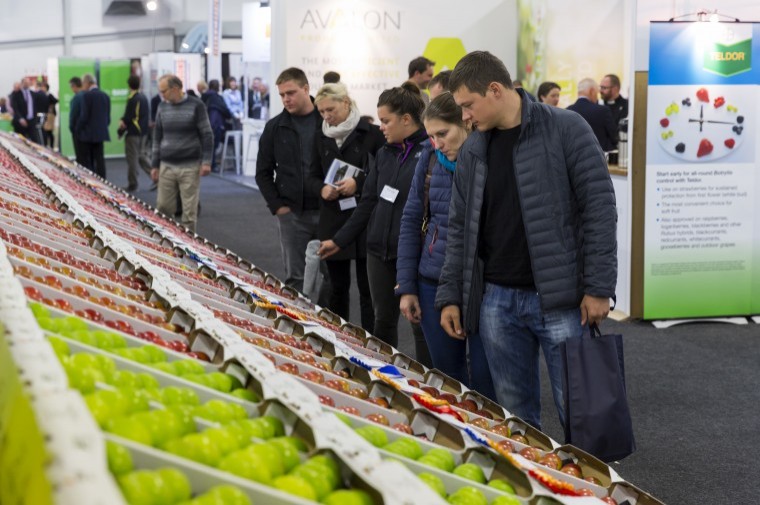 Top fruit competitions at this year’s National Fruit Show saw a total of 127 entries across all the competitions with 35 growers entering the top fruit classes one to 21.

The two day show at the Kent Event Centre featured discussion on Brexit and the consequences for the fruit industry. Alison Capper from the NFU horticulture and potato board highlighted the need for farmers and growers to communicate their needs to government ahead of article 50 being invoked.

The team from the Department for International Trade South East held one to one meetings to discuss potential options moving forward and the issues for growers around the labour market were high on the agenda.

The show was formally opened by the Right Reverend Trevor Willmott, Bishop of Dover, who blessed the fruit and welcomed everyone. Sarah Calcutt, show chairman, said: “The competition fruit this year has looked fantastic although with the late season we were slightly down on the late varieties which were still on the trees.”

Judging for the nation’s tastiest apple saw an organic variety, Rubinstep, take top spot. The winning apple was grown by Mole End Organics, and impressed the judges with its flavour and texture. The winning apple also won best exhibit in class 18, which is for growers who have not won a first prize in the past five years. Paul Ward who farms in Cranbrook was delighted that his organic entry won the accolade.

He said: “Rubinstep is actually sold in the UK under the name Blaze and originates from the Czech Republic. We think that Mole End Organics is the sole commercial provider of this variety of apple in the UK and has grown more than 100 tonnes this year. The fruit for the show was selected and packed by our farm manager, Ms Nicoleta Ionita, who was supported by her assistants, Tomasz Blawut and Kristyna Nekolova – who won prizes in the novice grower category at the show.”

Click here to read our full review including results