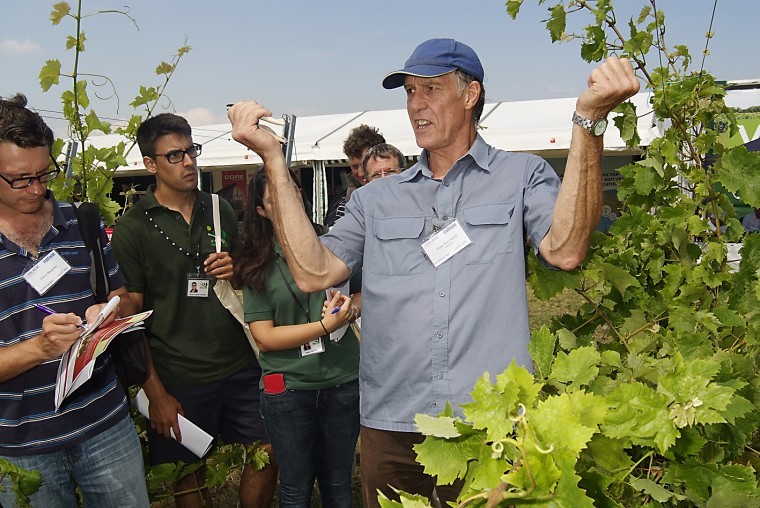 The event, which took place on 23 July at East Malling Research in Kent, hosted a highly informative mix of topical forums and the latest market and technical information laid on by 120 exhibitors, which attracted over 1200 visitors.

An industry-led consortium, involving Worldwide Fruit Ltd and East Malling Services, would direct the evaluation of promising material, underpinned by pre-breeding research to develop markers for fruit quality and disease resistance, he said.

Prof Gregory said the new programme, together with a major expansion of research into top fruit growing systems at EMR, underlined the facility’s commitment to top fruit research that would give the UK sector a very significant advantage.

“We are investing in people to take new developments to market and are building up a large portfolio of projects,” he said. “If you think East Malling has taken its eye off the ball in relation to top fruit, that is not the case at all – we are back in business in a big way.”

Adrian Barlow, chief executive of English Apples and Pears, said the news was incredibly encouraging. “It is what the top fruit sector has been longing for. We’ve seen a real renaissance in the English apple industry and we need all the benefits that modern technology offers to continue that transition.”

Farm minister George Eustice, who officially opened Fruit Focus 2014, said he was keen to find ways of levering additional money into the sector to fund research. Although there were no plans to review the much over-subscribed £160m Agri-Tech Strategy he believed there were other opportunities to draw down funds.

Levy board research also needed to be carefully targeted, Mr Eustice added. “I am keen that we really refocus the efforts of those levy boards to really make sure that money goes on the right kind of research.”

Mr Eustice also said he was “very conscious” of the importance of off-label approvals for the fruit sector. He said there was a need for a joined-up approach to ensure the necessary crop protection products remained available to growers, one that recognised risk, not just hazard, to put it into context.

He hoped efforts across Europe to see if levy bodies and research organisations could share out approvals work would pay off.

The Fruit Forums sponsored by the NFU proved popular with visitors. The NFU’s Dr Chris Hartfield tackled the hot topic of pollinators, hitting out at the “lazy journalism” that was responsible for spreading the myth being pushed by campaign groups that pollinators were on the edge of an apocalyptic decline.

A wide-ranging study based on field records showed there had been dramatic reductions, but these had occurred between the 1950s and 1980s. Over the past two decades the declines had slowed and there had even been slight uplift in the biodiversity of solitary bees that made up about 90% of bee species.

In the second NFU forum examining the use of seasonal labour, Paul Broadbent, chief executive of the Gangmasters Licensing Authority, urged growers to work closely with his organisation to stamp out abuse.

Demand for low-skilled work offered the potential for somebody to unlawfully exerting power and profit, he said. “If you have a whiff of information feel reassured you can call us or email us and we can talk about the best way to solve it.”

Key areas to watch included avoiding cheap schemes that looked too good to be true, said David Camp, chief executive of the Association of Labour Providers. “Either they are not paying tax, or the workers are not getting that to which they are legally entitled.”

Growers should be wary of helpful workers who offered plentiful cheap labour – they were likely to be unlicenced gangmasters. He strongly advised growers to conduct due diligence when hiring a supplier.

On the marketing front, Berry Gardens forecast a bumper year for strawberries, partly due to the mild spring, which brought the season forward three weeks. This helped the company supply over 90% more strawberries to the market between March and June compared with last year.

Managing director Nicholas Marston said: “Strawberries have eaten really well this year and delivered outstanding quality. We still have several months of UK production to enjoy and this year is forecast to be a bumper year.” Overall, the strawberry category is expected to rise 10% year on year.

Raspberries were following a similar pattern, though very high yields meant weaker grower returns to mid-July, he added. Blueberries were set for the longest season yet, helping drive market share up by 10%.

Exhibitors revealed a host of new products and equipment at the event.

Tow and Blow UK demonstrated a portable wind machine to protect crops from frost, with engine and fan mounted on an 8m extendable tower, capable of protecting up to 4ha at a time.

The RotaBug, a new applicator from Koppert, was also in action. Used to dose biological agents in large-scale strawberry crops, a pedestrian-operated version and tractor-mounted version designed for table-top systems were shown.

EMR’s research tours proved as popular as ever. They outlined management of pheromone traps to help identify pests and time spray applications and a demonstration of PomeVision, an orchard-based Apple Counting Vision System to improve crop quality and yield of their crops. The tour also included a visit to the Concept Pear Orchard as well as the EMR Rhizolab.

“Fruit Focus 2014 reflected the event’s importance as a place to do business and catch up with the latest technical developments, as well as being a great venue where key policy makers, industry figures and progressive growers can network,” he said.

“I’d like to thank all our sponsors, visitors and exhibitors for making it such a success.”

Nigel Trood, managing director of Fruit Focus principal sponsor Mack, said: “We love being at the heart of Fruit Focus. This show connects people right through from research scientists to retailers; there were many occasions on our stand where scientists were deep in discussion with commercial and technical teams, and I very much look forward to watching the fruits of these conversations emerge.

“My thanks to Sainsbury’s for their support on our stand, to Haymarket for another great show, and to all who attended. See you next year!”