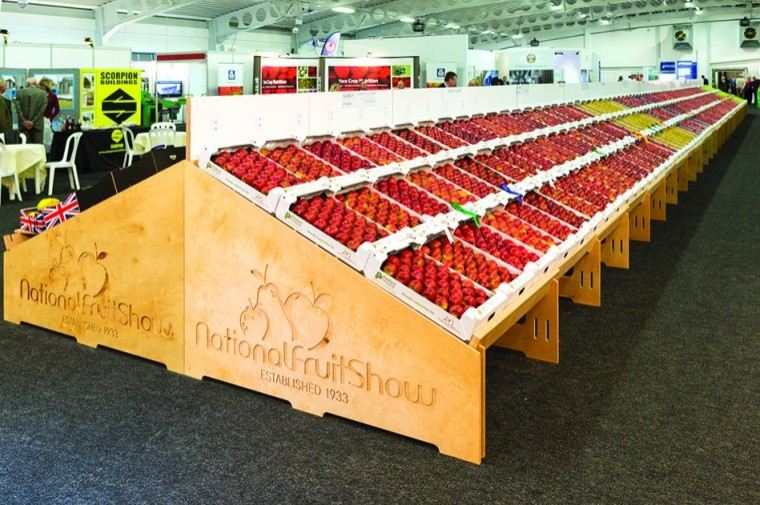 The leaking Kent Pavilion of last year has been replaced by a much improved Maidstone Pavilion with its wide open span much more suited to events such as this.

The Marden Fruit Show Society, who as usual organise the show, staged a near record 151 entries of apples and pears. This year for the first time the fruit entries were displayed on brand new, bespoke staging, with magnetic labelling and eye catching carvings of the shows logo on the end panels.

Also another near record was staged for the heaviest apple and pear competitions: this was a reflection of the unusually good growing conditions this year.

In the competition classes, each entry consists of three single layer trays of fruit, the aim being to select the very best quality fruit possible, free from pest or disease, undamaged and with no blemishes and as alike as possible in size, shape and colour. It is these attributes that each entry is judged on by a team of 32.

Each big commercial variety of apple and pear has its own class along with classes for any other variety of dessert apple, culinary apple and pears. The winners of each class receive a trophy and a prize.

In addition there are three more classes – two for novices, who haven’t won a first prize in the last five years and one for under 26 year olds, which is especially designed to encourage the next generation of exhibitors. The winners of this receive the Sue Daly memorial trophy.

The main prize winners were:

Newmafruit Farms Ltd took first prize in the Kanzi class and first prize in the Cameo class: their Cameo entry achieved the highest points in the show for any apple or pear with 99¼ points for which they were awarded the Roderic Sarson memorial trophy and the Stokes Bomford rose bowl.

Bardsley Farms ran away with both Bramley classes for which they were awarded the Podger Norton trophy, both Cox classes and also took the first prize for their Russets.

R D Applegrowers followed up their success of last year with first prize again for their Rubens entry and were a very close contender for this year’s Roderic Sarson trophy.

Simon Bray had considerable success by taking first prizes in the Jazz class and the Braeburn class.

Loddington Farms Ltd took first prizes for their entries in any other dessert apple and also any other culinary apple.

Clive and Richard Edmed won the prestigious bonanza prize of 100 fruit trees, 1,000 stakes and a cheque for expenses to visit the nursery, and also won first prize for their entry of Comice.

After winning last year’s novice prize, Rankins Farm followed that up by winning the Conference pear prize this year and the Bayer rose bowl for the best exhibit of pears.

J L Baxter & Son took first prize in the Concorde pear class and also for their entry in the any other variety of pea.

Hadlow College students continued their success of last year by winning the novice apple class with their entry of Cheerfull Gold.

Kate Langridge won the Sue Daly memorial trophy for her entry in the under 26 class.

The favourable autumn weather encouraged a good display in the soft fruit classes. Edward Vinson Ltd won first prizes for both their summer fruiting and everbearer entries in the strawberry classes and also won the coveted Joan Buttfield trophy for the best overall entry of strawberries.

In the nut competitions, P J Nicholls won the Kentish Cobnut Class; J I B Cannon won the prize for any other variety of cobnuts and the John Bardsley tankard for the best overall entry of cobnuts. Simon Brice won the Bennett Opie prize for his entry of walnuts.

In the tastiest competitions Simon Bray won the prize for the tastiest apple with his entry of Jazz, closely followed by two other Jazz entries from Weystreet Farm and Chandler & Dunn. In the tomato competition Robert Farthing of Cornerways Nursery won with their cocktail entry of Brioso.

Read the full feature of pictures and results