» Minister rules out help for growers 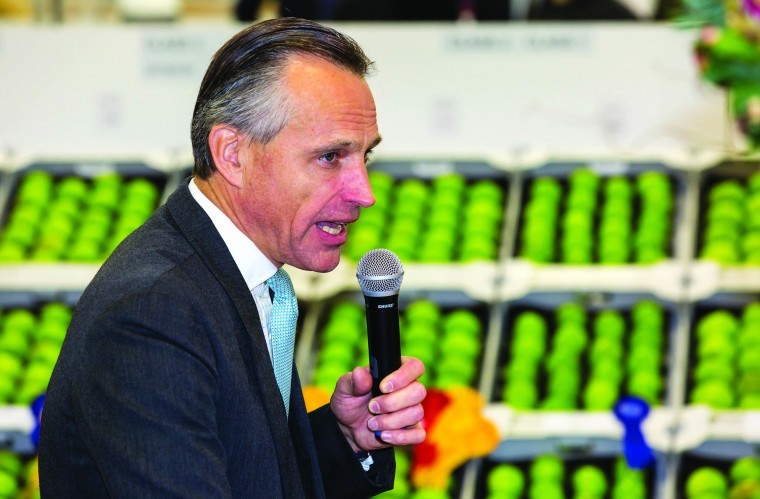 Speaking at the National Fruit Show before DEFRA turned down the aid, junior minister Lord de Mauley said the industry would have to rely on markets at home and elsewhere to survive the effects of the Russian ban on EU food imports.

Here are his answers to questions from South East Farmer. To start with, we asked:

There is a lot of fruit on the market and this has been increased by the Russian import ban. As a consequence, prices are not that good. What is the government doing to try to help growers and bolster prices at a very difficult time?

On the Russian ban, it is really important that we as a nation stand firm against provocation of a country like Ukraine. We have to face the situation with broad shoulders.
As regards the effect on prices, we have a season where yields were very good, so it is not all bad news. Even if there wasn’t a Russian ban, there would be something else, and we have to address pricing as a long term issue.

What is very good news is that the retailers have been very loyal and their customers have been demanding local produce. So we are able to continue to sell British produce through our retailers.
In addition, we are working on exports and exploring and looking for new markets. For instance, we have sold apples to Hong Kong and the Middle East and we are working with producers to open up new markets. It must be a long term effort to broaden our approach to the global market and that is something that DEFRA secretary of state Liz Truss is pioneering efforts to expand.

Nonetheless, the retailers are in hot competition, and that is helping to drive prices down. The discounters are fighting with the larger supermarkets. Can the government do anything to help promote top fruit?

A lot must be down to private sector effort and the government will do whatever it can to help. Things aren’t that bad and the retailers are being pretty loyal. British fresh produce is getting renewed interest from customers.

But the Poles are going to carry on exporting the 700,000 tonnes of apples they used to export to Russia. Unless the Russian ban goes away, it will exert an enormous pressure on price, won’t it?
Yes, and this industry is not alone in facing pressures on price – which is why we have to differentiate ourselves on quality and value added. I have seen some of that at the National Fruit Show – particularly in the technology which growers can use to improve the taste, quality and texture of fruit. I think we are leading the way in that.

We need people to pick the fruit and traditionally we have relied on the Seasonal Agricultural Workers Scheme, which has stopped. Growers say they are OK at the moment but looking two to four years down the line, they are less certain where their labour is going to come from. Is the government going to put an alternative scheme in place or do you think the market will look after the labour supply?

While we have been able to help the private sector find jobs for two million more people since the last election, we still have more than two million unemployed. It is really important that we help them find jobs. If farmers and growers still can’t find people, there are another 27 countries in the EU where they can look to find people to work on their farms and in orchards.

I think our private sector is very good at fighting its way through that sort of thing. It knows it needs labour, and the labour is there to go and be recruited.

English people don’t want to pick though, do they?

Well, as I said, there are at least two million unemployed and we must do our best to help our own people into work. But there are 27 other countries and people do come from them.

The industry needs all kinds of insects to pollinate top fruit. You were going to produce a national pollinator strategy. Is that happening?

We announced the call to action on the national pollinator strategy in the summer and the final strategy will be coming out before the end of the year. Liz Truss, the new DEFRA secretary of state, arrived and decided she wanted to put more effort and attention into it, so we are doing more work.

What is the answer to the suspension of the three neonicotinoid pesticides and the likelihood that we will go on losing more and more agrochemicals?

Well, as you know, we as a country believe that we should base our decisions on the science. We didn’t agree with the EU ban but we are a country which abides by the law, so the ban applies.

Farmers are using a number of other pesticides instead of neonicotinoids and none of them are perfect. We are investing £160 million in our Agritech strategy and a key strand of that will be to work on new types of pesticide and new ways to tackle pests and diseases which we face in agriculture and the food industry.