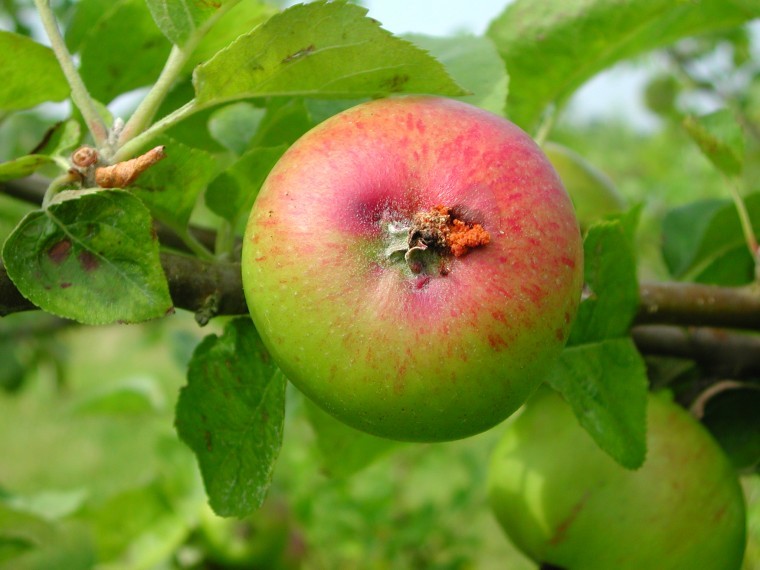 This new BASF product, distributed by Agrovista and designed for use in apple, pear and cherry orchards, provides a season long mating disruption to combat these moths, writes Richard Shepherd-Barron. It is approved and registered already in Belgium since 2010 and now in use in 50% of the orchard areas there. The two types of female pheromones have been trialled for three years in several UK orchards but mainly with John Portass of Wisbech Contract Farming in Cambridgeshire. John’s 90 hectares of orchards are very productive, averaging 50 tonnes per hectare with some crops as high as 63 tonnes in the 3,000 tonnes total sold to major retailers each year. As many growers know well, the 2016 season showed high levels of codling moth activity in untreated areas in June, resulting in 60-70 codling-affected apples per 1000 fruit but in RAK-Treated areas, only one or two fruits were affected per 1000. John confirmed this by saying: “By using RAK 3+4, I’ve seen 96% of fruit damage-free from the moths”.

The RAK 3+4 dispensers are easy to use as they are simply hung on the fruit trees in April before first flights, flooding the area with female pheromones so that the males cannot locate partners and thus are confused and unable to find the females to mate. As a result, no fertile eggs are laid and populations are reduced. BASF are very clear in saying that the new system will revolutionise moth control and leafroll, reducing the reliance on the use of insecticides and the risk of residues in the crop. The containers are designed to last for nine months and will be available from Agrovista in time for the 2017 season. Each unit contains two capsules of different female pheromones – one for codling and the other for tortrix moth. These diffuse slowly over the entire season.

BASF advises that the dispenser units should be placed in the upper third of the tress, preferably on the shady side at the rate of 500 units per hectare. The minimum area to be treated should not be less than one hectare but more than four hectares is preferable. Hanging the units well clear of the body of the tree is important and opening the outer product bags should only be opened immediately prior to use in order to avoid loss of efficacy. The standard pack contains 8 cartons of 252 units each of which is sufficient for normal use on 4 hectares. One unit should be placed approximately every 20 square metres at varying heights. For example, a row width of 3.5 metres a unit should be placed every 5.7 metres. Boundaries are crucial so particular attention should be paid to these by doubling up the dispensers – this applying also to any roadways or extra wide paths between trees. Monitoring the total pest population with traps and regular inspections is very important. If thresholds are exceeded, then treatment with a conventional insecticide will be needed. This is recommended on the label and is common practice in France and Belgium where mating disruption has been established for several years and has support from their producer organisations. Growers there are using a well-timed insecticide in addition to RAK 3+4 as an integrated pest management approach. Growers should pay close attention when checking traps to look out for inflights of mated females from other orchards.

Under high pest pressure, the level of control from RAK 3+4 can be reduced. If used in this situation, growers need to monitor carefully for pest species and use an insecticide if thresholds are exceeded. Simon Townsend, Agronomy Manager for BASF, said that growers should be mindful that this approach does not rely on using any broad spectrum insecticides so new or past pest species may become a problem. These need to be controlled with appropriate IPM measures. He said: “In some UK trials we’ve encountered a resurgence of moth pests which have not previously been a problem, e.g. Blastobasis sp. There are other pest species of top fruit that aren’t controlled – Spilonota sp and Epiphyas sp. Growers should consider using an insecticide for these and if Blastobasis has been found in the previous season, then use an insecticide timed to control it in the subsequent season.”

The best results have been achieved in orchards that are more than 100 metres or more away from other orchards or high trees. Optimum results are achieved also in grouped orchards containing trees of similar size and shape. BASF are very clear in stating that RAK 3+4 will not be effective if there is a high density of codling moth and/or tortrix moth in the area adjacent to the orchard being treated. Paul Bennet, Agrovista’s agronomist, commented that his company had actively encouraged BASF to produce this new product for the UK market and that the trials have shown that there is a gradual decline in the moth population over the seasons.