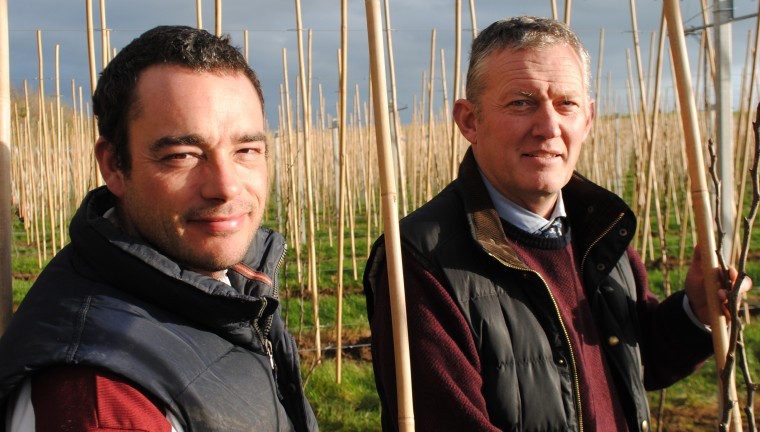 It is likely the fly arrived on imported fruit in the past three years, and is now beginning to make its presence felt. In the United States the pest caused an estimated £300 million of damage in 2008, and without the appropriate controls in place in the UK it has the potential to wipe out an entire crop.

Hutchinson’s Kent based agronomist, Chris Lillywhite, has had first hand experience of the fruit fly which has been found on many farms, including A C Hulme and Sons’ fruit farm in Kent where Mr Lillywhite walks the stone fruit.

The business supplies all the big supermarkets, wholesalers and local businesses with cherries, pears, apples, apricots and plums. So a great deal of effort was put into trapping and monitoring this new pest to ensure that the quality of cherries continued to meet the high standards expected by customers.

“An adult spotted wing drosophila is brownish yellow in colour, with black bands on the abdomen and red eyes, but unlike other fruit flies the males have a black spot on their wings,” says Mr Lillywhite. “It is an aggressive pest of both berry and soft fruit and in the UK, fruits such as raspberry, gooseberry, blackberry, plums and cherries are now at serious risk unless an appropriate preventative pest control programme is put in place.

“2014 was the first time that we found actual evidence of the spotted wing drosophila on our farm, but we think it had been in the country for about three years already,” he says. “Unlike our native fruit flies that attack only rotting fruit, the spotted winged drosophila attacks developing crops by laying eggs in healthy fruit.”

The fly’s life cycle takes between seven to 14 days, depending on temperatures, with the maggots feeding and pupating in the ripening fruit. Female fruit flies can lay up to 60 eggs at a time and 13 generations of the insect can hatch in a single year.
Fruit grower, Tom Hulme, says that fly traps set up by East Malling Research in 2013 confirmed that the fly had been identified in the UK. “Poor biosecurity let the problem into the country,” he says. “The impact of this pest is devastating in that it can massively affect the yield and marketability of the cherry crop. It is a very worrying time for us.

“The issue is that we are not being given or allowed to keep the necessary tools in the pesticide armoury to tackle the problem. Continually depleting our chemical armoury only compounds the problem,” he says. “The result of this fly taking hold in a crop could quite simply wipe out the UK cherry industry.”

As Mr Hulme explains, the design of a cherry orchard usually includes a number of different varieties – normally three but often up to five – to encourage cross pollination.

“Most cherry varieties need to be pollinated by a different variety,” he says. “So the success or failure of a crop is designed around pollination, with varieties usually ripening within three weeks of each other. This presents its own set of problems, with a limited number of pesticide applications.

“Traditionally, cherry growers have not really sprayed their crops close to harvest other than with fungicides for botrytis where necessary,” he says. “The spotted winged drosophila presents a whole new dimension to pest control because the only way to eradicate it is to spray preventatively every seven days and with over 20 varieties in the portfolio it presents a nightmare with harvest intervals.

“I take personal responsibility to ensure that all our produce is sprayed on the correct day to ensure all harvest intervals are observed. We have a zero tolerance for the spotted winged drosophila, but there is also zero tolerance for chemical residues on the fruit which we must observe.”

Under normal circumstances a pest problem can be identified because it appears first on the outside of an orchard, explains Mr Hulme, and identifying it early means it can be dealt with before it takes hold of a crop.

“Although we knew the threat was very real, we couldn’t find any in the marketable fruit that we were picking, so we were fairly confident that we were in control of the situation. We managed to continue this level of control throughout the entire 2015 picking period so we were confident the pesticide applications were working even when we found the very odd cherry on the outsides of orchards that had damage. This was supported by the fact that on one occasion we found the pest in every cherry on a single branch on one tree in the middle of a cherry orchard and it really scared us. Luckily every maggot was dead.

“We concluded that the explanation for this was that the first spray must have missed the tree that ended up being affected, perhaps due to a gust of wind. By the time we applied the second spray the maggots had already hatched and done their damage but were killed by the next application without spreading to the rest of the orchard,” he says.

In 2015, Mr Hulme took all available action to control the fly by utilising the full pesticide armoury in eight applications in the season including Tracer, Exirel, Hallmark and Gazelle.

Mr Lillywhite says that Hallmark and Gazelle are not particularly effective at killing spotted winged drosophila, but he has had more success where Tracer and new entrant, Exirel, have been applied together in the same programme.

“An emergency off-label approval for use of Exirel was only made available towards the end of last season, thank goodness just in time, as this took the pressure of Tracer and provided us with an effective anti-resistance measure with a short harvest interval,” he explains.

However, he says a pyrethroid spray, such as Hallmark, can be very detrimental to beneficials so he would rather not use it in programmes, but with so few options available, he has no choice. “Exirel – on the other hand – is very safe to beneficial insects, which is why we like it.”

Mr Hulme adds that it is largely due to the efforts of Vivienne Powell and Scott Raffle from the Horticultural Development Council to ensure Exirel achieved an emergency approval that saved the day.

While he has had to accept that the fly is in Kent to stay, he hopes that future insecticide programmes will continue to contain robust preventative chemistry that ensures the crop is protected throughout its entire growing season and with minimum impact on the harvest interval of the crop.

“One real challenge we face, however, is with existing, often hobby growers, who don’t understand there is a problem and so didn’t spray at all last year. This led to a number of serious infestations and so spotted winged drosophila will almost certainly be waiting to infest this year’s crops,” he says. “It overwinters as an adult so by the spring when the weather warms up, it is going to spread very quickly.

“We know that the fly has survived Canadian winters so there’s no doubt it will thrive in this country,” warns Mr Hulme. “I can say with some certainty that without the addition of Exirel, last year would have had a very different outcome for us.”