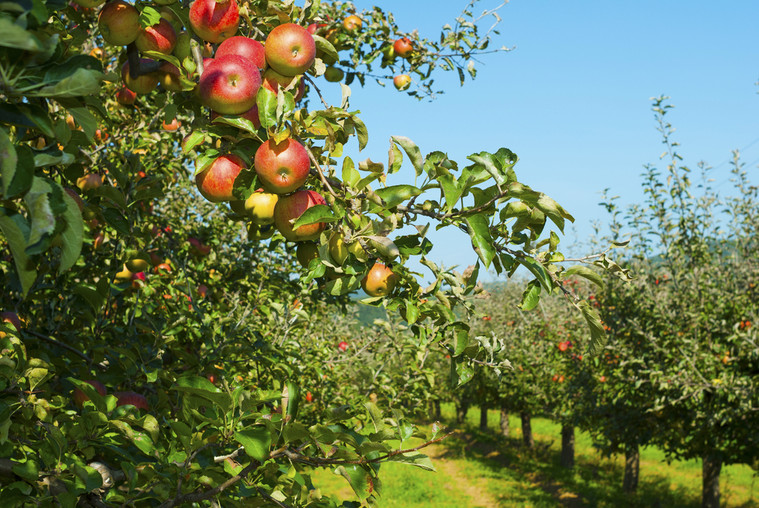 The 10-year project (see box) may still be in its infancy, but it is already revealing some interesting results that could influence future orchard designs and help growers raise productivity, manage costs and “future-proof” their businesses.

Alongside the various experimental planting configurations originally established at the HELIOS sites in Kent and Gloucestershire when the project began four years ago, new work is being added to drive the project forward. Both locations are also proving an ideal testing ground for new digital technologies that could add another level of precision to orchard management.

HELIOS West for example, is hosting the only UK field trials for a three-year project looking to develop a new remote sensing and decision support tool that could help growers and agronomists more easily identify threats such as scab, mildew or red spider mite.

“The aim is to see whether we can use a hyperspectral camera to take an image of a tree canopy and identify any pests or diseases present based on changes in the wavelengths of light detected. For example, clear changes in reflectance occur in the 440-700 nm region when mildew is present,” says Mr Kitney [see images].

Currently the research is using an advanced hand-held hyperspectral sensor, but RAL Aerospace is also testing a simpler camera that can be mounted on a drone to cover a larger area more quickly. “We’ll compare these results with the hand-held sensor to see if there’s a correlation.

“Ultimately, we hope this work could help us develop a practical system that can be mounted on a drone, tractor or other piece of equipment, to help scan orchards and identify areas of concern for the grower or agronomist to focus their attention on.”

Continuing the precision agronomy theme, HELIOS West is also testing a new spore trapping system developed by Newcastle University, that could give advanced warning of scab risk in the area.

The system uses a simple method of collecting spores from the air, with daily samples sent for PCR lab analysis to identify whether any key disease spores are present.

“At the moment it’s early days, but if it could be developed into a farmer-friendly test that can be done at home, it’s an exciting prospect,” says Mr Kitney. “Spore sampling like this helps validate the accuracy of scab models currently being used and gives us a way of checking for conidia spore release during the growing season.

“If we could eventually combine the data from spore trapping and the hyperspectral imagery into a single system, there’s big potential to bring a whole new level of detail to orchard management.”

The comparison trial in a Gala orchard is being managed by Oxford Agricultural Trials (OAT) and features replicated plots of new and established products designed to enhance the plant’s natural defence mechanisms against the scab pathogen Venturia inaequalis.

Used as part of an integrated crop protection programme, elicitors could reduce the reliance on conventional fungicides; something that is becoming increasingly important with the loss of actives such as mancozeb and thiram, plus tighter restrictions on the maximum application amounts and rates of others like captan and dithianon, Mr Saunders says.

“Some elicitors have performed better than we might have seen from a full fungicide programme, whereas others have done very little. IRIS has been an extraordinary project that’s far exceeded our expectations so far.”

Mr Kitney recognises the trial has been tricky to set up and manage through the season, as using elicitors is not a case of following a basic treatment protocol. “It’s a credit to OAT for doing such a good job managing the treatments throughout.

“The trial site has historically been a low disease site, but this year scab and mildew pressure has been incredibly high and all came at once, which has helped highlight differences between products.”

All plots will be taken to harvest and it is hoped that the work can be repeated next year to see whether elicitors can again provide robust disease defence within an integrated programme.

The long-term performance of several canopy designs that cost-effectively maximise light interception and yields remains a key part of the ongoing work at both HELIOS sites.

While it will take time for trees to reach full yield potential, there are some interesting observations emerging from the different planting configurations being trialled, as summarised below:

Low-cost intensive orchard with minimal support (M116 rootstock):
Trees have established nicely and filled out well at both sites. Mr Kitney suggests yields could soon challenge the conventional M9 trellis system despite being planted at around half the density.
Next spring he plans to plant another 0.5-0.75 acres on the low-cost system to see how it performs on a larger scale, more reflective of commercial orchards. Trees will be hand planted into a sprayed-off strip of grass subsoiled with a single leg machine. “We will firm the trees in well, but won’t use any trellis work, so the potential savings could be very significant. If we can catch up yield by year four or five, it will definitely be in profit.”

M9 “V” spindle system:
Trees have developed very well and look good with high canopy density and the fastest buildup of yield, but there are concerns about how easy it will be to manage longer-term, as well as the cost of establishing this system.

PV orientation:
The M116 rootstock on the “PV” plot at the Kent site has been removed due to the time taken to train trees up the canes. Angled canopies like this may be a step too far for this rootstock, Mr Saunders suggests.
However, trees on M9 have fared much better, with indications that Brix levels are higher than in other plots, suggesting trees may be able to benefit from increased light interception.

Geneva 11 (G11) “Stringfellowing” trial:
While the Kent site has been slow to establish having being planted late due to the pandemic and then hit by a dry summer, trees at the western site have grown well, already hitting the top wire.
“We’ve tested Stringfellowed G11 trees planted normally, into bare soil and through a membrane. This latter option may be more useful in future if we lose herbicide options. G11 rootstock is particularly interesting as it’s reputed to have resistance to apple replant disease,” notes Mr Kitney.

M116 “double laydown” trees:
The 1 ha trial features three-row beds with rows six-feet apart. Trees are laid down in both directions, with vertical stems every 40 cm to give good air and light penetration.
“They have taken time to establish, which reduces the payback, so in hindsight it may be better to start with a Bibaum tree with two balanced leaders to fill space in year one, rather than waiting for them to grow into the space,” says Mr Kitney.

The latest varieties are also being investigated at the HELIOS sites to judge performance in contrasting UK conditions. This spring saw another new area of five different early-maturing Gala clones planted at HELIOS East. “Currently harvest is concentrated at the back end of the season, so the aim is to see if these varieties can help us spread this workload by bringing harvest forward,” says Mr Saunders.

Substantive variability in the size, density and crop load of individual trees is a major cause of sub-optimal yield and quality in commercial fruit orchards, but it is something a new research project hopes to tackle.

Such tree-to-tree variation makes it very difficult to apply the optimum dose of thinners and growth regulators, which can have knock-on effects for canopy growth, fruit yield, size and quality, Mr Saunders says.

The Innovate UK-funded project, hosted at a separate site near Faversham, is using LIDAR scanning of trees in winter to map height and density, before another drone-based scan is taken in the spring to assess blossom. Both sets of data are then analysed using artificial intelligence and machine learning to develop a variable rate plan for applying thinners and growth regulators through a purpose-built sprayer fitted with RTK guidance giving 20 cm accuracy, he explains.

Image 1 shows the spectral signature of healthy leaves (blue line) versus those with Powdery mildew (red line). There is a clear difference in reflectance for both datasets.