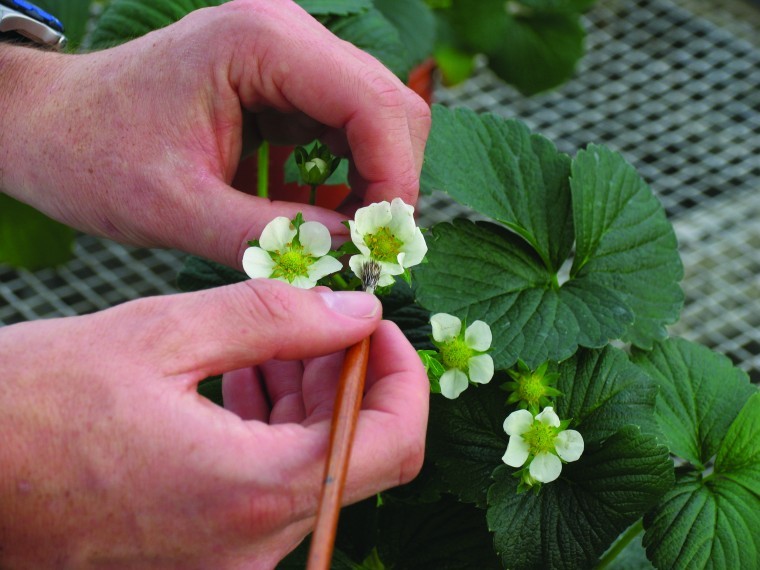 With funding from the government’s Agri-Tech programme, the scientists are aiming to overcome a key weakness in varieties already grown in substrate with fertigation, which provides water and nutrients via tubing.

“When breeders select varieties for growing in substrate, they invariably select from the field,” said Dr Richard Harrison, a research leader and geneticist at East Malling Research, who is working on the project alongside EMR strawberry breeder Abi Johnson, in partnership with CPM, East Malling Services, Botanicoir, Agrovista and Sainsbury’s. “With varieties grown in soil, breeders do not have the ability to select for characteristics which perform well in more nutrient limiting scenarios.”

With commercial partners, Dr Harrison and his team are running a breeding programme in substrate over four years. “We have the ability to select varieties grown in substrate which perform better under a reduction in phosphorous and fewer general inputs such as water.” In general, the breeding pipeline for strawberries takes seven years from the seedling through to a commercialised variety. But in this programme, the seedlings are already two to three years down the pipeline, allowing Dr Harrison’s team to identify selections which are part way through the pipeline so they can be commercialised.

The £1.4 million funding is split half and half between the government and industry partners. The substrate being used is coir, a natural fibre extracted from the husk of coconuts. Dr Harrison explained that strawberry growers can no longer rely on soil because of disease and the diminishing number of chemicals available to them.

In addition, local authorities are demanding planning permission for polytunnels, said Dr Harrison, making them less attractive for table top strawberry production in the future. Some growers are still using bags to grow strawberries in polytunnels, leaving the fruit susceptible to soil borne disease. “In the future, we hope our new varieties will be suitable for robotic systems in glasshouses,” Dr Harrison explained. Glasshouses will allow longer production periods, but their use depends on whether growers can make the economics work. “With more investment in anaerobic digestion plants, heating glasshouses – a big part of the cost – may become cheaper and more sustainable.”

Another disadvantage of selecting varieties from the field for growing in substrate is that scientists do not know much about the root structure. “But the plant’s root architecture has a big impact on its ability to take up nutrients and water,” said Dr Harrison. “Understanding how variations in the root architecture affects a plant’s performance will help emphasise traits such as drought tolerance.”

One influence on root architecture is arbuscular mycorrhizal fungi (AMF), which scavenge micro nutrients from the soil and seem to help strawberry plants. “There are differences in the fungi’s ability to colonise different varieties,” Dr Harrison said. “We do not know how that effects production. But if the fungi have an advantageous effect on phosphorous uptake, for example, we can select for varieties with that trait.”

Dr Harrison emphasised that his team is not involved in genetic modification (GM). “We could do this working using GM,” he said. “It would be faster, but the technique is not acceptable to consumers. Instead, we are enhancing the plant breeding process by understanding where the desirable characteristics are in the plant genome and taking those through the plant breeding programme.”

Work on the programme began in April and the scientists are now starting to disrupt the plant populations they are working on by taking preliminary measurements of the varieties’ ability to be colonised by AMF.