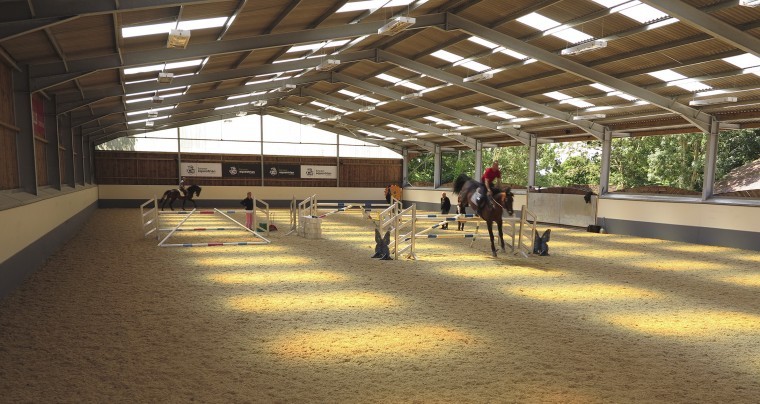 World-class sportsmen require world-class facilities, and that’s something that G E White and Sons is developing a well-deserved reputation for supplying.

The Lewes, Sussex-based company run by brothers Gary and Jason White and their father Geoff, is increasingly in demand for quality equestrian buildings that meet the needs of top sportsmen.

Recent projects include a new stable block for race horse trainer Gary Moore, whose son Ryan has been voted the world’s best flat jockey, and an impressive range of buildings for top international showjumper Shane Breen at Hickstead Place.

While the brothers are still equally busy with general agricultural work, taking on new builds and repairs and refurbishments on all kinds of steel-framed buildings across much of the South East, their fast and flexible approach has seen the company increasingly in demand from clients in the equestrian world.

Satisfied customers have been quick to spread the word, and in such a close-knit community that has resulted in a number of new contracts for stable buildings, barns, sand schools, tack rooms and the like.

The new buildings for Breen Equestrian have created a complex that must rival anything in the country, with a luxury tack room overlooking a state-of-the art sand school and attached to a block of eight stables that includes a solarium and wash-down facility.

Gary Moore, who runs Cisswood Stables in Horsham, Surrey, was one of those who approached Gary and Jason after seeing an example of their work elsewhere and asking for their name and number.

“I liked what they had done elsewhere and I had heard a number of other people say good things about them and so I asked them to build me a new barn for stabling – and I was delighted with the result,” he recalled.

“They were quick and efficient and got the whole job done from start to finish in a really short time,” he said. “I still ride out two or three times a day and I have 100 horses and 34 staff to focus on so it was important for me to bring in a construction firm I could just leave to get on with it.”

It turned out that “getting on with it” included working out how to install the stables, which were delivered in ‘flat pack’ form without any instructions. “It was an interesting challenge but it came together and the client was delighted,” Gary said.
G E White and Sons tackled the whole of the project for Gary, whose enterprise takes in 180 acres and involves training horses including Sire de Grugy, which won the Queen Mother Champion Chase at Cheltenham Festival in 2014.
The expanding company now has its own digger and dumper, which dad Geoff used to carry out all the groundworks on what had been a greenfield site. G E White and Sons also put in a new access road and installed the drainage, water supply and electric ducting as well as doing all the concreting and fitting the stables themselves.

“We find that clients like to have one company responsible for the whole job so that they can leave us to it,” said Gary. “People generally have plenty of other things to be getting on with and they know we can be trusted to deliver a great end product.”

At Cisswood Stables, that end product included reusing old stable doors but suspending them from the top only, thereby ensuring they are free running but removing any potential trip hazard at the entrance to the barn.

The company also designed and installed specially made arched windows to improve the look of the building. The insides of the window shutters are lined with tin to prevent the horses from chewing the wood.

Gary and Jason used their father’s name when they set up the business ten years ago, but it was only recently that his sons persuaded him to come and work for the business – and now he is unstoppable.

“I rang him the other morning at around 6am just to check he knew where he was working that day, and he was already on site and wondering where we were,” Jason recalled. “We really benefit from his lifetime’s experience and knowledge.”
The 24m by 13m barn at Cisswood contains 12 stables and features a cantilever at the side to provide additional shade for the horses. It is finished in Yorkshire boarding and has a central drainage channel.

G E White and sons prides itself on offering a competitive price and the brothers have continued to invest in the company over the past decade. Along with a fleet of vans and the groundworks machinery they also now have their own forklift and a range of other equipment.

The company also has the skills – and the connections – to create a bespoke finish that goes well beyond what is normally seen in agricultural or equestrian buildings – as the new tack room at the Breen Equestrian set up at Hickstead demonstrates.

The wood-clad room with a window overlooking the sand school is about as far from the normal perception of a tack room as it is possible to get, while the solid oak counter tops made from a tree that used to stand in the grounds of Hickstead would rival those found in a Premiership footballer’s kitchen.

The room exudes quality and is used for displaying trophies and viewing the action in the adjacent school, as well as for the more mundane task of storing tack, and even that is done in a way that resembles an upmarket shoe shop rather than a stable yard.

The sand school itself is 48m by 24m – the maximum that the brothers could fit on the site – and sits on top of a tank that collects rain water from the roof. The water is used for the washdown bay in the adjacent stables, but clever capillary technology means the water also keeps the sand moist in the school.

Electric gates with the button situated at just the right height for a rider on horseback is another simple but effective luxury touch, while Jason’s idea of half enclosing the front of the building with curved panels won particular praise from Shane’s wife Chloe, a director of nearby Hickstead.

“It’s a great design because it keeps the school weatherproof but it allows plenty of light in so that it’s never gloomy in here,” she explained.

Gary praised the work of his brother, who was mainly responsible for overseeing the Hickstead project. “Jason has delivered an absolutely first class facility by focusing on the detail and always looking for that extra finishing touch,” he said.
Chloe Breen said: “G E White and Sons helped us right through the project. As well as doing everything from the groundworks through to the cladding, they made sure that all the finishing touches were done properly, even down to painting the walls of the school and installing the planters outside as a finishing touch.”

Getting the levels right and fitting all the buildings in on what was a very tight site were among the technical challenges the brothers had to over come, but the end result is a top notch facility for the Irish international showjumper, who also breeds and sells horses.

“They did a fantastic job,” said Shane. “They are great lads and they worked really well. Nothing was ever a problem, and even when we wanted to change some of the details or add things in we felt they were working very much with us, rather than against us – and that’s not always the case.”

G E White and Sons looked after the whole of the project, including the brickwork and the paving in the yard, something Shane welcomed because of the cost-effectiveness it provided.

“It was a huge advantage to have one company in charge of the whole project and I was impressed at how quick and efficient they were,” he said. “The levels across the site were a nightmare and they had to make sure the planners were happy because of the listed building nearby, but everything came together exceptionally well.”

The quality of their workmanship is perhaps reflected in the fact Gary and Jason now see themselves as friends of their client and have been to Hickstead to watch Shane compete in showjumping competitions since the project was finished. “It highlights the closeness of the relationship we built up and the trust the client placed in us,” Gary said.