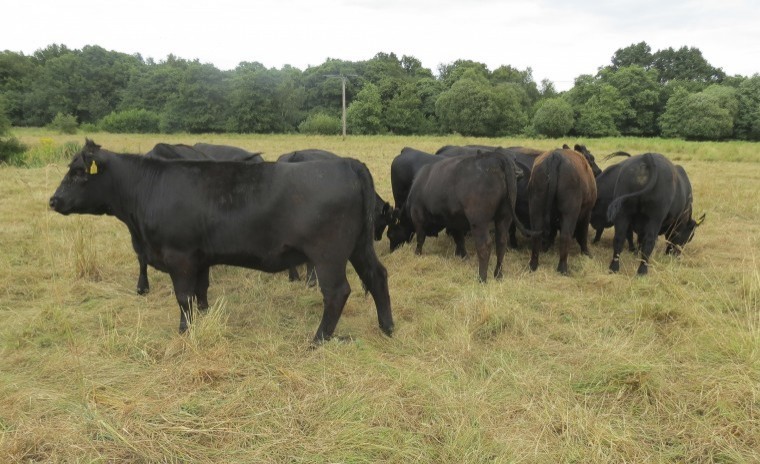 With all his land on a very sandy loam, Angus Stovold has always farmed for drought. “I am used to having no grass, so I am not too worried,” said Mr Stovold, who keeps prize winning pedigree Aberdeen Angus cattle for breeding at Lydling Farm and Field Place Farm near Godalming in Surrey.

Farming for drought means that water meadows are taken for grazing, and lucerne is grown for feed. ”We are extensive just for this scenario,” said Mr Stovold. “We have big water tanks so that the cattle don’t get crowded when it is very dry.” Each field has a 600 litre mains fed tank. “In the summer, when the cattle come to drink, the water doesn’t run out, so they don’t panic. In the winter, if they ice over, there is still enough water underneath for about a week before you need to start worrying.”

Without rain in April, May and June, the farms can sometimes end up with no grass. “We always have to be one step ahead of the weather. The current drought is prolonged and it is not good, but we are coping with it well.”

Towards the end of July, Mr Stovold had not had to buy in any feed, and was still on last year’s forage. “Even after a long spring, we still have feed from last year, which is pretty good. Normally only dairy farmers look that far ahead, but we have kept the forage going pretty well.” This year’s silage has not been touched, which Mr Stovold thinks will be a blessing later on when stocks are short.

Forage is made from lucerne, which Mr Stovold says is a wonderful crop. “You put it in the ground in May, and as long as the pH is right, there is a bit of fertility, the tilth is good and the ground is clean, you can leave it for five years. It doesn’t need any inputs – except perhaps for a bit of potash once in year two – and it grows like a weed. There are five years of growth, and we cut it four times from the second year. This year, we cut it at the beginning of July, and a few weeks later it is back up to three feet.” With deep roots, lucerne does not need any water during a drought: even in wet years, the crop thrives.

Mr Stovold is currently growing about 60 acres of lucerne, which will feed the cattle through any dry period. “You have to be very disciplined with the crop – it must be cut every six weeks or before,” said Mr Stovold. “You can either put it in a silage pit or a round bale. We put the first cuts in a pit because protein levels are high.” Protein levels decline as cuts are taken, and the last cut in October tends to be buffer fed to cows with spring calves before they are weaned. “This keeps the milk levels up and cow and calf benefit from the really good forage.”