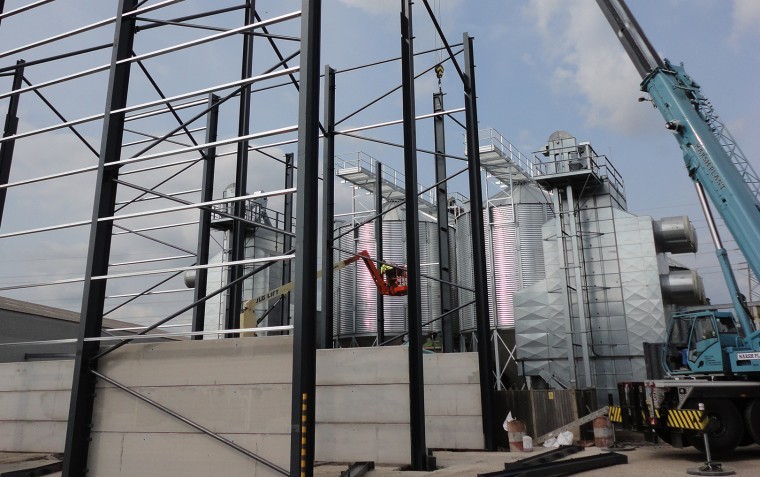 It says much about the agricultural industry that people who would be rivals in many other walks of life end up as good friends.

In the case of Mike Bartter and Andrew Morley, two well-known names in the world of grain drying and mechanical grain handling, that long-term friendship has turned into a new business relationship that is set to deliver benefits all round, not least to the customers of both companies.

Morley Grain has now become a division of Mike Bartter Systems in a move that will broaden the reach of the new collaboration and create new flexibility in the way it can serve an expanding customer base.

It also brings together an impressive 80 years of experience in grain handling as well as shared skills and economies of scale.

It was an informal arrangement between the two companies back in 2013 that proved to be the catalyst that sealed a deal both men had been considering for some time.

Andrew, who had set up his grain drying and handling business in 1991, took on a large installation project at Chichester Grain, a farmer-owned co-operative grain store in Hambrook, West Sussex.

Having previously supplied two 40 tonnes per hour (tph) Perry of Oakley dryers, he was asked to build four 250-tonne hopper bottom silos together with alterations and additions to the two 120 tph intake systems.

Realising that he needed additional expertise, Andrew asked Mike if he could provide someone to help out and was offered Mike Bartter Systems technician Stuart Marden, who spent the next nine weeks at Chichester Grain pushing the job along to meet the harvest deadline.

“The project went so smoothly with Stuart on board that I realised my customers would benefit from the support of Mike’s team on other projects,” said Andrew. “Their added expertise turned out to be the catalyst that led to Morley Grain becoming a division of MBS.”

He went on: “At 65 retirement is somewhere on the horizon and I really don’t want to spend as much time climbing up ladders and turning out at all times of the day and night as I have in the past. This new arrangement gives me the support I need, as well as giving my customers access to great technicians.

“It will make my Sunday afternoons more relaxing as I won’t be struggling to find a sub-contractor who isn’t on the beach with his family if I get a call-out from a customer with a problem, but at the same time the company name will live on as a bit of a legacy after all these years.”

Andrew began his career at Massey Ferguson dealer Walter A Wood’s grain division in 1967 before joining silo manufacturer Brice-Baker in 1972 and going on to cover from Kent to Cornwall as area sales manager for the next 20 years.

In 1991 he left Brice-Baker and set up A J Morley, selling, designing and supplying grain drying and handling systems and enjoying the freedom to choose from the entire range of manufacturers rather than having to recommend something from his employer’s range.

“It was refreshing to be able to choose the right product for the job and that was something that I have always made sure my customers benefit from,” he commented. “Manufacturers all have their strengths, and being independent allows you to choose the right bit of kit for every job.”

It was while working for Brice-Baker that Andrew first met Mike, who worked for E O Culverwell as grain installations manager between 1984 and 1998 and received regular visits from Andrew in his sales role with the silo manufacturer during that time.
Andrew’s business took off rapidly and by 2010 he was using technicians hired in from Mike Bartter Systems as the result of the friendship that was by then already 26 years old. Five years later it is as strong as ever and has led to the formation of the new business, which covers Kent, Surrey, Sussex and Hampshire.

As well as being able to rely on skilled labour from MBS, Morley Grain is now benefitting from the electrical expertise within the parent company and the sales and administration support provided by Emma Bartter and the rest of Mike’s team.
After his 14 years with Culverwells, which no longer has a grain division, Mike left the Lewes depot in 1998 to set up Mike Bartter Systems, incorporating it as a limited company five years later.

He provided service and support for grain storage and grain handling equipment as well as some maintenance and repair work, and as the business grew he moved to new premises in Ringmer where he could also begin to offer
fabrication services.

A few years later he was providing support to many of his old Culverwell customers, as by then his former employers were concentrating on selling cars, tractors and agricultural equipment, and at the same time he developed the electrical side of the business, which has since become a core part of the Mike Bartter Systems offering.

“By 2008 business was booming and I had three electricians and a couple of fitters working for me on the mechanical side and I was running four vans,” he explained. “The electrical side of things has continued to be a strength of Mike Bartter Systems – although now we have as many fitters as electricians, supported by eight vans running throughout the South East.”

Andrew Morley’s base at Ansty, near Haywards Heath, allows him to cover a more westerly part of the region, which was another factor in the decision by the two men to develop the new working arrangement.

“We had spoken a number of times over the years about the possibility of working more closely together and this seemed like the ideal time,” said Mike. “Because Andrew was a sole trader, the simplest way to do it was to make Morley Grain a division of MBS.

“We have always worked well together and the two operations are complementary. The new set up has helped forge a stronger, more professional and sustainable team to support our current customers and be there for the next generation of farmers.”