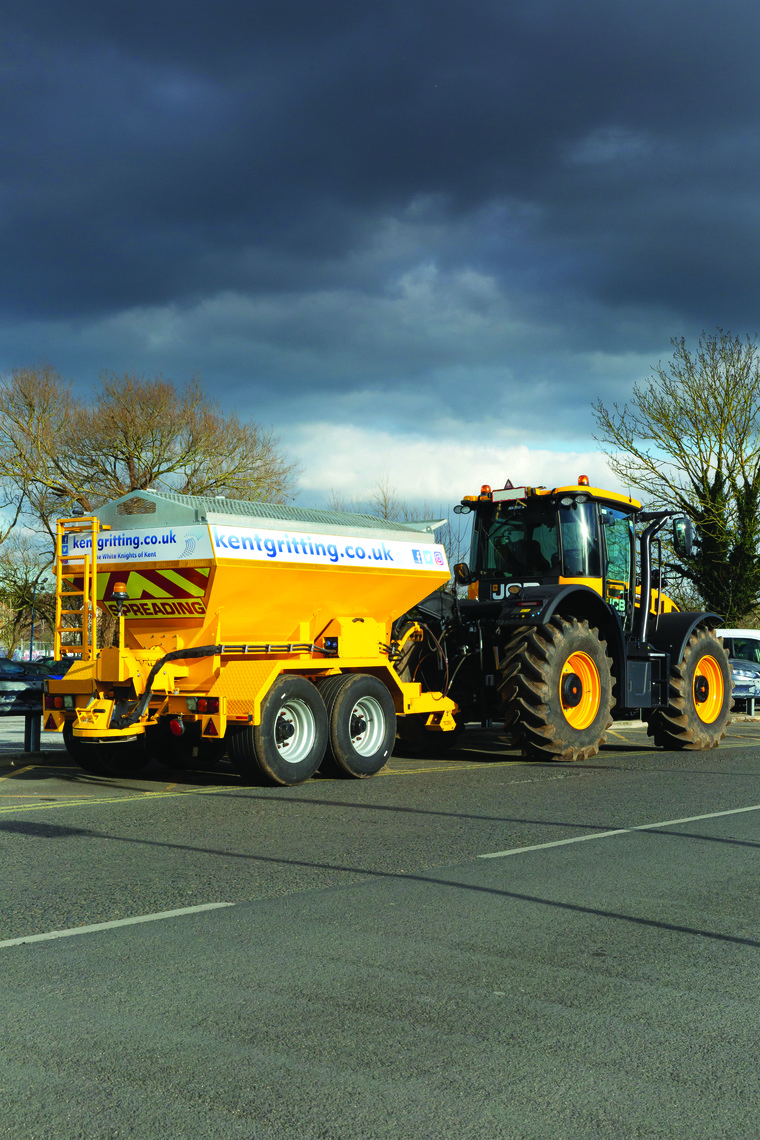 Tom Swayne of Kent Gritting has built an extremely profitable winter maintenance business which has successfully grown over the past decade. His commitment to the company, which has been nurtured from the start, has recently seen the business evolve into a Nationwide Facilities enterprise, which includes a progressive Nationwide Gritting brand at the forefront of its growth. As such, Tom needs to devote more time to his national organisation and is therefore seeking a purchaser, or partner, to take the reins of Kent Gritting and to continue its successful operation throughout the South East of England.
Coming from a farming background, Tom set up Kent Gritting to complement his already existing equestrian and farm contracting businesses, which were operated seasonally throughout the spring, summer and autumn. ‘’The winter maintenance operation filled the gap throughout the winter months,’’ commented Tom ‘’and soon became very lucrative,’’ he added.

With high level contracts already in place, the new owner will inherit an existing and expansive portfolio of work, largely provided by Tom’s Nationwide business. ‘’Further to this, extra income will be generated from other commercial enterprises,’’ he added, ‘’where excellent long-standing relationships and revenue streams have been well formed over the years.’’

Across the network of existing clients, numerous contracts have been secured on a fixed price basis, meaning even on a mild year income is guaranteed. The ready-made client database includes some impressive names such as the NHS, Aldi and supermarket giant Asda, to name but a few. With an aggressive growth strategy, Nationwide Facilities Ltd will only be adding to the list of big names. ‘’We will continue to secure further contracts with other leading brands, which will safeguard the future income for both Kent and Nationwide Gritting,’’ Tom explained.

To enable this level of expansion, working alongside Tom in the Nationwide team are Winter Maintenance Director Louise Hindle, recently recruited from national competitor ‘Gritting.com’. Joe Allan-Nagy, Head of Operations and BDM who also moved from a national competitor ‘De-Ice’ four years ago. Katie Milldown, (previously Sales Director at Savills) heads up the sales division and is currently recruiting a new sales executive for further business development.

In addition to gritting, Nationwide Facilities Ltd is setting out to provide further service lines to its existing and prospective clients as part of its long-term growth. The successful purchaser of Kent Gritting will also have the option to deliver these services if they wish, providing continuity of revenue throughout the calendar year.

‘’This is a golden opportunity for someone to benefit from an already profitable revenue stream, throughout the winter months and beyond,’’ Tom added.

The equipment, which is also included in the acquisition, is predominantly made up of British built Vale machinery. The fleet is extremely robust, reliable, owned outright and mostly aged within three years old. ‘’We have always taken great pride in operating the very best equipment and keeping it well maintained, which is vital for reliability when carrying out gritting and snow clearance services for our clients,’’ Tom explained.

‘’I appreciate there’s a lot of talk about global warming, but what we really have is climate change, not warming,’’ Tom admitted. ‘’We still have regular cold spells, such as the one we experienced in January.

“It wasn’t so long ago we had ‘The Beast from the East’, and last year we saw lower than average temperatures with gritting work extending until the end of April. Clearly some winters are harder than others, but extreme weather will continue to happen and will continue to bring opportunities.

‘’The opportunity is there; it just needs the right person to take the opportunity. And whilst we all know that British winters are unpredictable, income from Kent Gritting certainly isn’t.’’ Tom concluded.

For an initial and informal conversation regarding this opportunity, please call Tom Swayne directly on 07775 774440