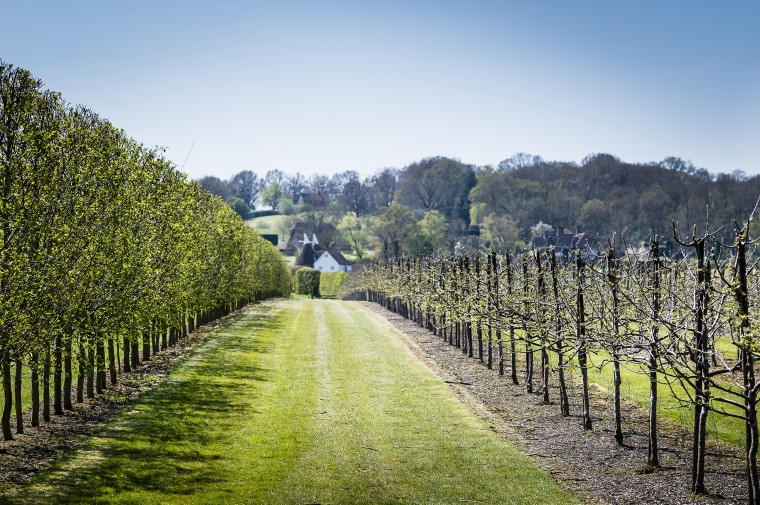 With 1186 hectares spread across Kent, Sussex, Surrey, Hampshire and the Isle of Wight, the South East of England is at the forefront of wine production, with Kent’s 311 hectares of commercial plantings listed as the largest county under vine.

Cultivating grapevines for winemaking has attracted investors from a multitude of non-agricultural industries with many farmers also seeing it as a lucrative sector to diversify into.

However, with the huge sums of investment capital needed and the extremely long-term forecasts for return on investment, this isn’t as romantic an industry as many believe and farmers should not enter into it with the view that planting vines is easy.

“Vines require an enormous amount of attention and if you are going to grow grapes you really need to do it well,” explained Richard Balfour-Lynn, owner of Hush Heath Estate. “Everything from our perspective starts in the vineyard and if we don’t get that right, we are never going to make great wine.”
Award-winning estate

The 400-acre estate owned by the Balfour-Lynn family, Hush Heath Estate planted its first vines at Oast House Meadow in Staplehurst, Kent in 2002. Original plantings comprising of five acres of the traditional Champagne varieties, Chardonnay, Pinot Noir and Pinot Meunier, have since expanded to 27 acres.

Even from the first harvest, with the 2004 vintage Balfour Brut Rosé receiving a gold medal and trophy at the International Wine Challenge, Richard and the Hush Heath team have received plentiful accreditation for the estate’s range of quality still and sparkling English wines.

“The majority of our wine is sparkling and but there is a growing demand for good quality, still English wines,” said Richard. “Our still red Pinot Noir won a silver medal at the International Pinot Noir Master, which we are all very proud of, and it is now being served by the glass at the Savoy in London. For the Savoy to be serving an English red by the glass really shows how far the industry has come.”

As well as supplying the Savoy, Hush Heath have exclusively supplied English sparkling wine to many other big names such as British Airways, the Orient Express and the London 2012 Olympics. While the English wine industry is still in its infancy and is sparking interest around the globe, Hush Heath have also begun distributing the range further afield.

“We started exporting 12 months ago and are now selling into 28 different US states, as well as Japan, Hong Kong and a few European countries,” said Richard Balfour-Lynn. “We are also the only English sparkling wines to be imported into Ontario, something which was mentioned by Theresa May the prime minister in a recent speech during her visit to Canada.”

As the Hush Heath range grows in popularity and demand increases, Richard is looking towards the future growth of the business. Alongside its ongoing on-site expansion programme, the estate is now looking for like-minded growers to take on 15 year contracts to help achieve its production potential.
“In 2017, we planted another five acres of vines, with plans for a further 30 acres in 2018 and another 20 to 30 acres in 2019. The development we are embarking on is quite extensive and in addition to increasing our area under vine we are more than doubling the size of our winery and building a 150-seater tasting room, meeting rooms, offices and storage facilities elsewhere on the site.”

Keeping the estate’s core boutique values at heart, Richard is aiming for conservative long-term growth and sees production reaching half a million bottles per year within the next five to seven years.

Keen to follow the Champagne method of surrounding the estate with like-minded contract growers and having already embarked on two long term agreements, Richard is hoping to expand plantings to a couple of hundred acres of vines, divided across the Hush Heath site and its contract growers.
“Finding people who share our passion for doing it well, with attention to detail and a willingness not to compromise is what we are looking for,” said Richard. “Our existing contract growers, Chris Nicholas and Tom Berry, would both say they are part of our estate. They are not doing it merely for commercial crop value. They put an awful lot of effort in and are interested in the whole process from growing the grape to ending up in a bottle; that is what we are looking for.”

While the majority of farmers looking to diversify into viniculture are previous or existing fruit growers with good fruit growing land and the necessary machinery and labour to make the transition cost effective, this is not requisite and for Richard it is all about site selection.

“Our land at Hush Heath was all hops and fruit and clearly if you have a fruit farm the likelihood is it will grow reasonable grapes. But I am open-minded when it comes to finding the right people and we are talking to someone at the moment who has never grown anything. If you have great land, would like to plant 20 or 30 acres and are passionate about doing it well, we will do as much as we can to help.”

While Richard is certain that he will know a good site if he sees it, there are a multitude of factors any farmer or grower looking to diversify should consider.

Site selection is absolutely vital and ideal candidates will have:

Despite many suggesting that chalky ground is vital for any grower looking to produce quality grapes, soil composition is only one element in a whole range of factors and someone shouldn’t be put off if they don’t have chalky land.

“We grow very high-quality grapes, make very good wine and are very proudly on clay,” said Richard. “Clay is fantastic for growing fruit. You may require underground drainage, but it’s well worth the investment and we would always encourage that anyway.”

Investing for the future

With costs of setting up a vineyard with the advisable underground drainage racking up to around £12,000 per acre (not including further investments into machinery), combined with vines taking up to five years to reach their full potential, Richard hopes that the 15-year contracts will give growers long enough for a proper return on investment capital.

“With a 15-year contract, we are hoping it will be a lot easier for growers to approach banks for finance with the ability to say who they are dealing with and what the contract prices are. They can build in the risk factors of a bad harvest with the guarantee that someone is going to buy the grapes for the contract term.”

Discussing return on investment is often tricky when it comes to vineyards because of the longevity of the project, but Richard puts Hush Heath’s track record of consistently high-quality wines down to the uncompromising work of the vineyard team over the past 15 years.

“The Turner family who have been managing the estate’s viticulture side since 2002 are completely passionate about what they do and never cut corners,” said Richard. “My worry is that pressure to create a quick return will lead to an influx of people into the English wine market who will make concessions and let standards fall for the industry. We want to encourage people to grow properly.”

Accordingly, contract prices will be based on quality with the best sugar and acidity levels achieving the best price. While yield will not be capped, growers looking for larger tonnage may discover that quality suffers and that will be reflected in the price.

“Although the average yield in the country is two and three-quarter tonnes per acre, at Hush Heath we usually achieve around four,” said Richard. “But over a five-year period, growers should be budgeting to make an average of three tonnes to the acre.”

As well as the fruit itself, growers should also benefit from an increase in land value, with mature vineyards currently worth around £30,000 to £40,000 per acre, a figure which is set to increase as the sector grows.

“I think that for farmers, land value is one of the upside opportunities in terms of capital growth and yield. With grapes, you are giving yourself a supporting chance of making a decent sort of return in terms of agricultural yields.”

For farmers who have the right land, are successful in securing investment capital and are passionate about working to produce quality English wine, the Hush Heath estate will be on hand to provide guidance and advice throughout the process.

Preparation is key when it comes to planting a vineyard, from aerating the soil to mapping for nutrient deficiencies, and for Richard these initial stages should not be rushed.

“It takes a year to prepare the land and I would always say to someone not to cut that corner. It is your one big opportunity to do the job properly and taking the time to do it well brings rewards long term.”

From details of which vine clones and root stocks to buy, how to prune with future growth in mind, to what to spray and when, right up to when the grapes are ready for harvest, Richard is keen to ensure that growers will be producing to the same standards as the estate’s own vineyard management team.

“We have been very fortunate here in that we have a site which produces very high-quality juice, but it’s also a combination of our huge attention to detail and the fact we are uncompromising,” said Richard.

Next steps
For anyone interested in embarking on a 15-year contract, Strutt and Parker have teamed up with Hush Heath to act as an initial port of call. Growers will receive practical advice from Richard throughout the contract, but should use the initial stages as an opportunity to get a second opinion.

Insights into the legal aspects, the tax implications, what land values may do and other business prospects are all factors potential growers would be wise to investigate.

“We will be utterly honest; I really want people to know the pros and cons because growers need to go into this with absolute clarity of what the numbers look like, what the risks are and what the upside is,” said Richard. “If we are signing a 15-year contract we need them to fully understand what is involved having taken independent advice.”

Viniculture is a respected profession and for fruit growers with existing equipment or for sites which are well sheltered, well drained and have less frost risk, it presents a real opportunity for farmers to diversify into a growth sector with a long-term future.