Two combines for the price of a service - South East Farmer 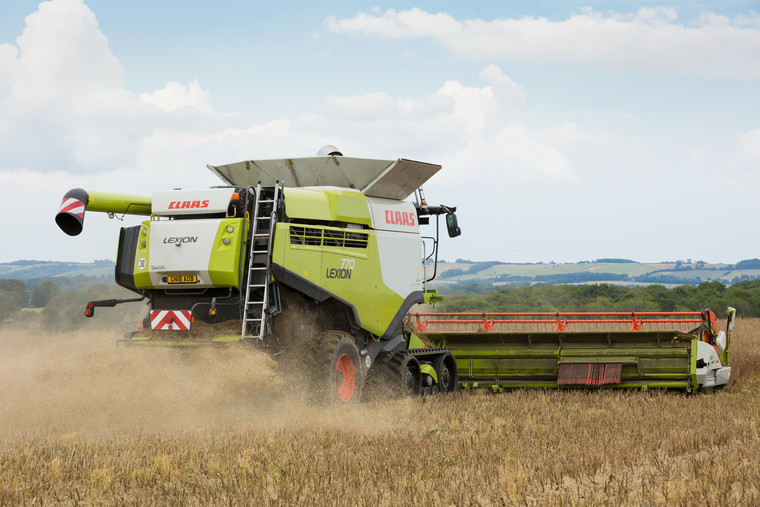 A black and white photograph on the wall of Martin Boulden’s Court Lodge Farm office shows a Claas Matador combine harvester working its way steadily through a field of wheat just outside Ashford in Kent.

From a desk drawer, the Aldington farmer produces the original invoice, revealing that in April 1962 the family business paid around £5,500 – including an ‘out-of-season discount’ – for not one, but two, Matadors.

“It costs me more than that each year to service that one,” he commented, pointing out into the yard, where a Claas Lexion 770 equipped with a 40ft header stood ready to tackle this season’s harvest once it had dried off enough after the previous day’s rain. And he wasn’t joking.

On the upside, Martin, who has been driving combines for half a century, pointed out that it would take 26 of the Matadors in the photograph to do the work of the Lexion, which can operate at 70 tonnes per hour, to say nothing of the benefits of air conditioning, GPS and the dozens of other modern refinements.

By the time Martin left school in 1972 at the age of 16 he had already been helping out on the family farm for a few years, driving one of the business’s three combines for real while most of his contemporaries were still dreaming of learning to drive a car.

The family’s farming connection with Kent goes back a long way, with great-grandfather David owning Pinn Farm in Bonnington in the late 19th century. Martin’s grandfather George, meanwhile, bought Ruffins Hill Farm in Aldington in 1908, growing wheat and oats on 150 acres of land and breeding horses for the Army, as well as keeping sheep.

Three of George’s four sons, Peter, Clive and John, joined the family business, and Martin still trades as G L Boulden and Sons in tribute to that heritage. He is Peter’s son and has now been joined in the business by his own son, Paul.

Grandfather George was conscripted at the start of the first world war but was soon sent back once the powers that be realised that farmers were too vital to the domestic war effort to be sent overseas.

“I sometimes think back to the life my grandfather had,” Martin reflected. “He went through the first world war and the depression in the thirties before then experiencing another world war, and during that time he brought up four boys. People today don’t realise what life was like for that generation.” George died in 1975 at the age of 92, leaving Martin’s dad and uncles at the helm of the business.

The family bought Court Lodge Farm in 1950, paying just £13,500 for 350 acres and five cottages, and the business has expanded steadily ever since. Including a considerable amount of tenanted land, G L Boulden and Sons now farms 3,500 acres spread over 13 parishes in and around Aldington.

The land is used to grow wheat, barley, oats, beans, peas, linseed and oilseed rape, while livestock includes 1,000 Romney ewes, 85 suckler cattle in three herds, together with youngstock, and a herd of some 20 Blonde D’Aquitaine cattle at Swanton Farm, Bilsington.

The business got rid of its dairy herd about 30 years ago, as did most of the other local farmers. “There were once 13 dairy herds in and around Aldington, but now there are none,” Martin said.

The arable operation is essentially mintill, with a limited amount of ploughing and no direct drilling as the land is not suitable and blackgrass is a persistent problem.

Unusually, the business has yet to diversify into business units or solar energy, but Martin and Paul are thinking of converting a barn alongside neighbouring Aldington Church into holiday lets, one of the options under consideration as they think through the implications of the end of basic payments. The subsidy cut is one of the reasons dad voted against Brexit, which has left him unimpressed.

“People thought they were escaping from European Union red tape, but those regulations have been replaced by even more complicated rules because we are determined to show we have the highest possible standards,” Martin said, pointing to a recently delivered leaflet highlighting new Red Tractor accreditation requirements.
“The paperwork is getting worse not better and we are about to see increased imports of beef, lamb and sugar from Australia. We don’t use foreign labour, but the fruit growers who do rely on it are having problems. Brexit really hasn’t done anything for farmers.”

While the Covid-19 pandemic didn’t have an immediate effect on G L Boulden and Sons, it has made haulage more difficult. It also meant the farm had to find other shearers for their Romney flock since the usual New Zealand crews were unwilling to come over because of possible quarantine restrictions on their return.
The lack of diversification to date reflects the size of the farming operation and the dedication that has made it such a successful enterprise. “We’re just too busy farming,” Martin admitted.

The father and son duo is helped by Martin’s sister Ginny (who “puts a thousand hours a year on a tractor and is very good with sheep”), Steve Noblett, who looks after the yard work, hedgecutting and the like, and recent arrival Alex Comey, who has been with the business around 18 months and takes care of drilling, haymaking and fertilising. Martin does all the spraying using a trusty Bateman parked outside the farm office on the day South East Farmer visited.

Once harvest arrives, Martin is back in his element at the controls of the Lexion 770, the latest in a line of combines he has driven over the past 50 years. “When I started, we were using three machines to do less than 1,000 acres,” he said. “Now I do roughly 2,700 acres with one – and the yield has virtually doubled over the same period. It’s a totally different process these days.”

While the process is different in terms of the efficiency of the machinery and the fact that the operator is sitting in relative comfort helped by more computing power than it took to land the first man on the moon, the job remains similar.

“Combining is essentially the same as it’s always been,” Martin said. “Except that you aren’t sitting in the dust these days. It’s a bigger machine but it works in essentially the same way – and things still go wrong. Driving this one isn’t much different to driving the one I helped dad out with in the early seventies.”

Martin and Paul have stuck with the Claas brand for 14 years and are impressed with the way it performs. They began their relationship with the brand when they bought a second hand Claas 600 with a 30ft header, later replacing it with a new 600 before buying their current Lexion 770.

Martin, now 65, and Paul, 42, sell the majority of their grain through Frontier and Openfield, with the current high price helping to offset the rising costs of inputs. “Nitrogen is about £130 a tonne up over the year,” Martin pointed out.

The current healthy grain market is also a comfort when thinking about a future without basic payments, although there is no guarantee how long that cushion will be there. “Losing the single farm payment will certainly prove to be a challenge, but I’m sure we will make things work,” he added.

“We have always relied on hard work to make the business a success; Paul and I certainly spend more time on the farm than anywhere else and that isn’t going to change,” he said, while paying tribute to the support provided by wife Jean, another integral member of the team.

Cattle and sheep reared at Court Lodge Farm are all sold through Ashford Market, which Martin said served the farm’s needs very well, and he has recently sold Blonde D’Aquitaine bulls for a healthy price. Certificates highlighting success at Ashford Cattle Show line the walls of the office.

The biggest change Martin has seen in the past 50 years is in the numbers of people working the land. “There used to be 15 farm workers here; we once had five shepherds,” he recalled. The weather is a continual challenge, although Martin is not persuaded by the climate change argument. “We get good years and bad years,” he said. “We have always had wet years. It’s just one of those things.”

A former parish council chairman, and still a councillor, Martin also served as a part-time fireman for 32 years, giving back to the community with which his family has been associated for so long.

That association could continue for many more years, too, with Paul and his wife Kristina having two children, Oliver and Sophia, and Martin and Jean’s daughter Caroline and husband Ben also having two, Rupert and Beatrice. One can only imagine how impressive the combines will be when they are old enough to help with the harvest.