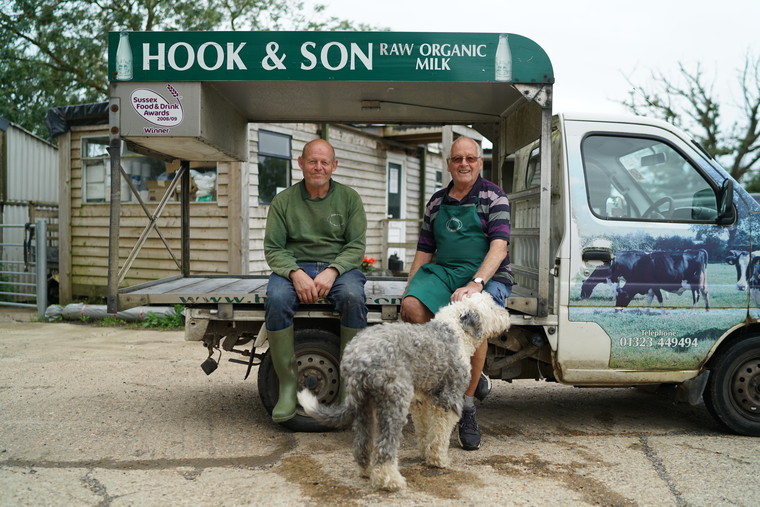 It’s been a turbulent few years at Hook and Son. On Friday 13 April 2018, one of their young dairy heifers tested positive for TB on a pre-movement test.

“We lost our TB-free status and our ability to sell raw milk, all because of 2mm on a skin test,” Steve said. Up until that point their turnover had been pretty high, at just under £1 million, and after costs they made a small profit.

Overnight their income crashed and suddenly they were losing £7,000 a week. They successfully crowd-funded to keep going and received generous support from their customers, including donations, private loans and many letters.

“At the same time as incurring massive losses we’ve had to invest in the business to turn it around so we could generate income again,” explained Steve.

In the initial aftermath, while unable to sell their raw milk direct, they processed all their milk into butter and ghee while they sourced, financed and installed a pasteurising machine, getting sign off from their local environmental health officer in under three weeks.

“All the doorstep rounds switched over to pasteurised and pretty much everyone stayed,” said Phil. “At farmers’ markets sales dropped, but our other products like butter, ghee and dairy beef took off,” added Steve.

“I feel like we’re turning a corner. We’ve got a fantastic team.” Having spent the past three years getting their costs down and income back up, they are now breaking even, but still have an awful lot of losses and loans to pay off.

Phil and Steve Hook have been in partnership since 1991 at Longleys Farm in Hailsham, on the western edge of the Pevensey Levels.

They converted to organic in 1998 and became Soil Association-accredited in 2000. After converting to organic they had one or two good years of money and then the price went down and they were struggling again.

“The organic milk market was very small back then,” added Steve.
With more dairy farmers converting, it didn’t take long for the price to crash. In an attempt to turn things around the Hooks joined forces with seven other dairy farmers in East Sussex to form the Wealden Organic Dairy Company. For two or three years they tried very hard to sell their milk but despite strong branding and provenance, it was all about price and they couldn’t compete against the big boys. The company subsequently folded.

In 2006 they decided to have a go at selling their milk direct to the public as raw milk.

“We went through the hoops to be licensed and in January 2007 started selling our own raw milk locally.

“From our first milk delivery of 12 pints in the back of Phil’s Volvo estate, sales took off and the first three years of growth were impressive” said Steve.

In 2009 they managed to buy the farm from the landlord. It was a case of third time lucky, owing to the fact that it hadn’t worked out on the two previous occasions they had been offered the farm.

“We were going well enough to be able to commit to buy it and that was the best thing we ever did,” he said.

The business continued to grow and in 2010 and 2011 they started selling raw milk online and doing farmers’ markets in London. By then they were employing three people.

“Then in 2013 the Moo Man film came out and we also had our raw milk machine in Selfridges – so both those things really upped our profile,” said Steve.

They gave up their milk contract with Milk Link and were selling 3,500 pints of milk a week online. At the time their raw milk sales represented about 40% of the market, which was beginning to grow rapidly as more dairy farmers switched to selling raw milk.

In 2014 around 610,000 litres were sold as raw milk in the UK. By 2018 this had grown to over three million litres, with around 170 producers selling direct from the farm gate and through vending machines.

In 2017 they bought a block of 70 acres which came up for sale next door. This extra land gave them more grass on the marsh. A year later, having just committed to an AMC mortgage, they were dealt a devastating blow when a young heifer tested positive for TB on a pre movement test.

It had been Friday the 13th, Steve recalled. “The bank manager was here at the time seeing dad and me. George, my son, stuck his head around the corner in the kitchen and said ‘Dad we’ve got a problem – we’ve got a reactor’.”

The bank manager made a swift exit, leaving Phil and Steve to make sense of it all. They privately tested the animal, which just about failed a skin test on the immune response, he explained.

Convinced the result was a false positive, they sent off milk and blood samples for what was a new test at the time, set up to detect the presence of TB bacteria rather than an immune response. It came back negative.

Despite this they still lost their TB-free status, which purely depends on the skin test result and not on any other test.

“That’s where the system is crazy, as any cattle that develop an immune response are culled out every year – so the national herd has no opportunity to develop immunity to TB, because it has been continually stripped out.

“I appreciate it’s the cheapest test, but if there is a reactor or it is inconclusive then there should be a blood test as well to define if it’s got TB,” said Steve.

“Whatever I think about our system, we lost our TB-free status and our ability to sell raw milk all because of 2mm on a skin test,” he added.

Suddenly, they were losing vast sums of money every week.

“That money is lost, we’ll never reclaim it. It’s gone. It’s that sort of business, but we’ve got a lot of loyal customers,” added Phil.

They successfully crowd funded to keep going, with the money raised being used to firefight and turn the business around, explained Steve.

Widening their product offering and rebranding

Being locked down with TB restrictions and unable to sell livestock off farm, they began butchering their cull cows and selling the dairy beef at farmers’ markets. “Suddenly we were doing one animal a fortnight, which boosted our income,” said Steve.

To reflect their widening range they began rebranding their business.

“So the Hook and Son brand – which was all about raw milk – is now grass fed organic dairy and beef and that’s working,” he added.

All their products are sold direct, via their two local doorstep rounds, 14 weekly farmers’ markets (all of which are in London apart from Lewes) or online.

I asked how Covid-19 had impacted their business: “Covid-19 has had a positive impact for us,” Steve replied.

They had over 300 new enquiries for their local milk round during the first lockdown when supermarkets were struggling with supply chain issues and shelves were empty.

Steve thinks it may have made some people reset their priorities: “Better food is a big part of that. You are what you eat and better food is one of the few pleasures you can have in life during lockdown,” he added.

Takings at their farmers’ markets are still up 20% on two years ago and last summer’s trade was incredible.

“They like the experience of buying from a farmers’ market and being shown pictures of cows calving. People respect food a lot more,” he said.

The dairy industry is on a hiding to nothing, believes Steve: “Supermarkets only worry about two things – dividends to shareholders and the basket factor, which is the average cost of their weekly shop.

“The only thing they can do to control that is to make sure the price of the items you buy week in week out, like milk and bread, are as cheap as possible,” he said.

The public don’t want to buy food that is mass produced all around the world, he said. “Whatever we do we never compete on price of product. It’s always on quality and we can then set our prices up there – it doesn’t matter, as customers buy our produce.

“People are astounded when I tell them that after rainforest, grassland is the next best carbon sponge, and in the UK we’ve got one of the best climates in the world for growing grass which supports fantastic beef, lamb and milk.

“We’ve lost our way but people are beginning to understand local grass-fed meat and dairy is the best you can have for health and climate reasons,” he added.

I ask what he makes of the growing vegan movement and plant-based milk alternatives like Oatly? “I love the vegans,” he replied with a wry smile.

“In January on the stall in Primrose Hill I had a couple of guys come up to the stall and ask if I sold soya milk as it was Veganuary. I replied ‘I’m sorry I only sell milk from lactating mammals – I don’t know of any milk from lactating plants – can you enlighten me?’ They both looked at me and walked away.”

Family farms and how to fund a more regenerative farming future

Steve worries for the future viability of family farms: “We communicate with our customers monthly and are the last dairy farm in the parish of Hailsham. A lot of people feel connected to us. If this farm and farms like it disappear – we’re in quite dangerous territory at the moment.”

With a lot of farms reliant on their annual Basic Payment Scheme payment to keep going he thinks some will be taking the golden handshake.

The public is crying out for more locally produced food and great access to farms, he said: “What’s missing at the moment is policy on how government is going to support on-farm processing and farm tourism.”

Despite all the challenges, Phil and Steve feel their business is in good shape.

They plan to continue to diversify to create new revenue streams and build a more resilient business. Steve tells me they launched creme fraiche in London just four weeks ago.

“It has blown people away – there are a lot of French people in our Primrose Hill market that know their crème fraîche and they love it and say it’s the best they have ever had,” he said.

This year they received planning permission to put five glamping units on their marsh, which they hope to have in place next year, and are also hoping to offer camping under the 56-day rule in the field next to Pea Pod Veg.

Eventually they would also like to build a visitor centre to tell the story of the Pevensey Levels and open their own farm shop.