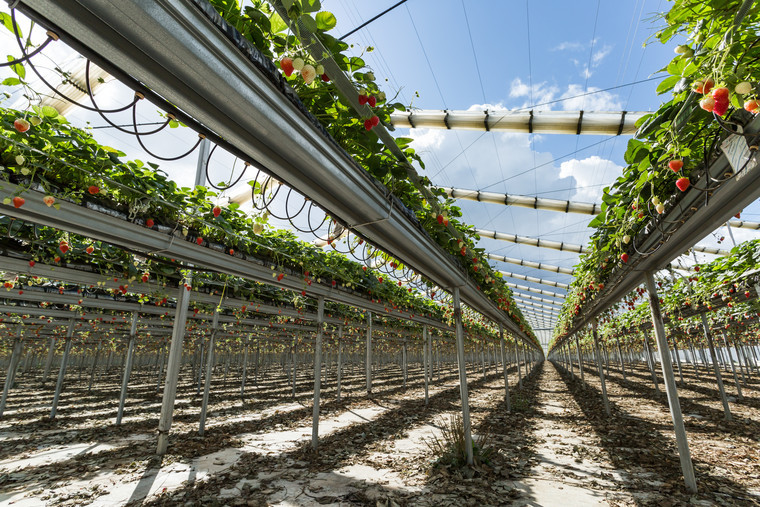 When grower Sean Charlton worked out the timeline that would allow him to pick fruit the following season on a site that was at that point still an arable field, he knew it was going to be a race against time.

He couldn’t plant his strawberries until he’d erected the state-of-the-art polytunnels he had in mind, and he couldn’t do that until he had completed the road that would allow him to access the site. He also needed an agricultural building where he could store the equipment that would service the whole operation.

The building would clearly play a critical part in the way the rest of the plan came together and so, faced with the need for a reliable and speedy supplier who could be trusted to get the job done, on time and on budget, Sean turned to Charlie Highton.

While Charlie’s business cards say Morley Grain, he tends to refer to his side of the operation as Morley Buildings, but a brief discussion on that point while the pair were outlining the project to South East Farmer quickly highlighted Sean’s priorities. “I don’t care what the company is called, as long as I know the person I’m dealing with will deliver the building I need in the timeframe we agree,” he said.

In this case that person was Charlie, who designed, supplied and managed the erection of the 70m by 25m steel-framed building that is now at the heart of the operation at Church Farm North, near Maidstone in Kent, as well as dealing with the health and safety issues.
“Working with the right person is critical in these situations,” said Sean, who is the fourth generation to run the family business founded by George Charlton in 1946. “I wanted Charlie to supply the building because I knew I could rely on him to deliver what I needed on time and on budget. It was a demanding timescale but one we couldn’t afford to miss. Charlie didn’t miss it.”

While the building at Church Farm North was the first to be erected by Morley Buildings – or Morley Grain – it was not the last. The company has since supplied another at Charltons’ packhouse and coldstore complex at Rumwood Green Farm, Langley, and has been asked to provide a third on another new site at Chart Sutton.

While the building is essentially an agricultural shed, Charlie pointed out that the Morley approach was to design buildings to an industrial specification rather than agricultural. “It makes a difference to the steel and generally makes it sturdier and improves the build quality,” he explained.

“As well as hitting deadlines and sticking to the budget, we pride ourselves on the quality of our buildings and particularly on the finish, where we concentrate on the little things like flashings, door framings and guttering. It all makes a difference to the quality, serviceability and longevity of the building.”

The building, which is fully galvanised, was first discussed in December 2017 and was up and in use by April 2018. “Sean made it clear that missing that deadline wasn’t an option!” Charlie said. He needn’t have worried. “We know how important it is for growers like Sean to be able to get on with the day job while we focus on what we are good at, and when we agree a price and date, we stick to it,” stressed Charlie.

Charltons had been growing apples on part of the site at Church Farm North, essentially an arable farm, when the opportunity arose to buy the 200 acre site and transform it into a much larger part of the grower’s 11-location enterprise.

“We like to mix apples and strawberries because that allows us to screen the polytunnels from any neighbours, who would much rather look at a nice orchard,” Sean explained as he outlined what has become a blueprint operation for the family business, one that is now being repeated at nearby Chart Sutton.

With apples grown alongside the margins of the site and close to neighbours, the company ordered a Cravo polytunnel system – although to describe it as a polytunnel hardly does it justice.

The Canadian system is a sophisticated plastic ‘glasshouse’ with a roof that opens automatically once the temperature reaches a certain point, allowing more natural light to reach the plants inside. Within one minute of any rain falling, the roof closes, again without any human intervention.

The irrigation system is even more impressive. All the rainwater from the glasshouse, which covers an astonishing 12 hectares-plus, is collected from the roof and drains gently downhill, taking advantage of the site’s convenient slope, and into a reservoir that holds around eight million gallons. In total, Charltons has just over 100ha of strawberries under cover.

That water is then pumped back uphill by a pumping system housed in the Morley building – another reason it had to be finished on time – and into four holding tanks. From there the water has its ph adjusted to the right level and has any necessary nutrients added before being delivered to the plants via an irrigation system that supplies the table top strawberries.

“It’s a self-contained, environmentally friendly system that makes us totally self-sufficient for water,” Sean explained. Any run off from the irrigation system is recycled separately as it has been treated with feed.

Charltons was the first grower in Europe to use the Cravo system for strawberries but it has proved its worth. The extra light provided by the fold back plastic roof on bright days has allowed the business to increase planting density and is having an impressive effect on both yield and taste.

“We needed the building for the pump house as well as for storing machinery, the packing crates and all the irrigation equipment,” said Sean. “It was a vital part of the plan and we were delighted with the way Morley Buildings helped us meet what was an ambitious target.”

The groundworks for the building were completed by Torran Construction, which also provided the same service for the new building at the company’s Langley Green headquarters and will again be working alongside Charlie and the Morley team on the Chart Sutton project, which is set to follow the same pattern as Sean pioneered at Church Farm North.

Charlie pointed out that as well as offering a full planning and design service, Morley Buildings has its own mechanical and electrical expertise on site thanks to its partnership with Mike Bartter Systems, which has specialised in grain handling and storage solutions for over 30 years and can offer those services as well as the building itself.

“In essence we can offer a complete turnkey package, and as Sean knows, when we give a customer a price and a finishing date, we mean it,” he added.